Wow, what a game! It very nearly ended up as a Bills loss, but alas for our lovely Raiders fan.... 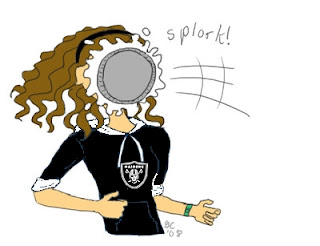 This game was one of those wonderful heart-stoppers that are so fun to watch...fun and maddening, as you watch each team drive home the killing stroke only to allow the opponent to get back up and keep fighting. This was a game that validates that old chestnut of football commentary: "I think the last team to score might win!"

The Bills looked bad for most of the first half, which after two games might well be shaping up as a pattern. Poor running defense combined with a Ryan Fitzpatrick interception led to the Raiders taking a 21-3 lead into halftime (would have been 21-6, had the Raiders not blocked a Bills field goal as time expired). But in the second half, the Bills came right back, scoring 21 straight points for a 24-21 lead. Then the Raiders made it 28-24. Then the Bills made it 31-28. Then the Raiders made it 35-31. And then the Bills, with fifteen seconds or so left, made it 38-35. And then the Raiders put up a Hail Mary as the clock expired, which came down in a crowd of players; luckily it was a Bill (rookie Da'Norris Searcy) who made the catch, securing the win.

It was a game of huge offensive plays on both sides, with some amazing catches. It was also a game of colossal errors for the Raiders, who seemed to commit penalty after penalty at times.

Random thoughts about the game:

::  Some folks are saying things on Twitter like "The Bills are actually fun to watch again!" But for my money, they started getting fun to watch again last year. They seem to have the same kind of approach to the game with a bit more experience and a bit more talent. I still think they're a way off from being a consistent winner, but I do not think they're several years off, anymore. But last year, for the most part they were usually entertaining and they teased fans a lot before losing because they simply didn't have enough talent. Late in the year, injuries took their toll so they ended up closing the year with a couple of blowout losses, but for the most part, they were a calm, collected, never-quit-fighting team last year too. It's just that this year they're better. How much better? Well, in the words of Chris Berman, "That's why they play the games."

::  Stevie Johnson continues to be a beast who lays it all out on the field, every time. The Bills can not let him get to the free agent market after the season. Come on, guys -- extend him already! (I have a feeling they will at some point. They are already talking with Ryan Fitzpatrick, and they seem to be taking a "talk to one guy at a time" approach to this stuff.)

::  Fred Jackson is just astonishing. He just is. Everybody knows it. But CJ Spiller seems to be settling in and figuring things out, too. I'm thrilled to have this one-two-punch at running back.

::  I felt kind of bad for the Raiders when they took an Unsportsmanlike Conduct penalty after the Bills scored a touchdown, and their coach (Hue Jackson) threw the challenge flag. Yes, he's a head coach, so he should know that the NFL is automatically reviewing all scoring plays now, which makes those plays "unchallengable". But still, that's a brand new rule and he's a rookie head coach, so...well, sucks to be him. I sympathize. (But not much. It's still football, folks!)

::  But also on the topic of Raiders and penalties, I'm no expert, but there were an awful lot of Raider hits on Ryan Fitzpatrick that really looked to me like late hits/roughing the passer's. All went uncalled. He took quite a few pops after the ball had been out of his hands for almost an entire 'Mississippi'.

::  On the go-ahead touchdown from Fitzpatrick to David Nelson, wow...I can't believe the Raiders let somebody get that wide open. Seriously, there were about five yards of space on either side of Nelson before you saw a Raider. Ouch. Apparently their defensive plan for that play relied on getting a sack, because they either didn't try coverage or they blew the coverage. Yipes.

::  With two wins already, the Bills are virtually eliminated from the Andrew Luck sweepstakes, unless they lose every game they have left (unlikely) or this is one of those years where the NFL's worst record goes to a team with three or four wins (also highly unlikely). Right now, I'm thinking that the Draft brings the best available right or left tackle to the Bills. (More likely right, on the basis of Demetrius Bell being off to a not-bad start this year.)

::  CBS's coverage was a mixed bag. The announcers were just kind of there, but apparently now it's a Big Frakking Deal now whenever any NFL player comes from Harvard. This just gets annoying. I know, you have to fill up airtime, but Ye Gods.

So, later on, they have a shot from Buffalo's Naval and Military Park, with a big old shot of the USS The Sullivans, which really impressed the hell out of me. I really think that CBS (and FOX, if they do the same thing -- I don't recall if they do!) should allow cities to pick where they take these shots, so they can get a little free publicity for area attractions. The only problem with the Naval Park shot? This time, the announcers didn't say anything! Couldn't they come up with a scripted sentence or two, like, "There's downtown Buffalo and their Naval and Military Park, where several decommissioned ships from our nation's Navy reside for tours. Lots of great history here in Buffalo!" Ugh.

::  Next week the New England Patriots come to town. Do I like the Bills' chances? Actually, I do. Sure, the Bills have lost fifteen in a row to the Pats, and they're 2-20 against them since the 2000 season, but there's this odd pattern that always seems to happen in both games, no matter whether the first game is in New England or in Buffalo. What happens is that the Bills play the Pats really hard the first time they see them, sometimes even nursing a lead well into the fourth quarter, before losing a tough one; then, the second time they see them, the Patriots just...well, they beat the crap out of 'em. It's kind of weird. So, will the Bills actually beat the Patriots? Enhhhh...I don't think so. I don't think they're ready to take that step yet, I'm sorry to say. I'd love for them to do so; I'd love for them to beat the Pats at least once while St. Tom the Overrated is under center for them. But I think that may have to wait for next year.

But, like Chris Berman always says, and like I quoted above already, "That's why they play the games!"

::  Whoa! Commercials for Hawaii Five-0's season premiere tomorrow night, and Terry O'Quinn is joining the cast? SQUEEEE!! Terry O'Quinn always makes things better by just being there. He doesn't even have to have dialogue.

OK, that's about it. Will my poor pie-faced football fan next week at last be wearing a Patriots hoodie? Here's hoping!

break up the BILLS!
Nah, I can't see them beating the Pats. I'd LIKE them to beat the Pats, but...