"No fate but what we make" 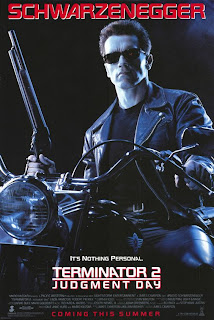 I hadn't watched Terminator 2: Judgment Day in quite a long time, so I picked it up from the library and gave it a whirl. I've only seen the first two Terminator flicks, but I've long counted them among my favorite sci-fi action thrillers, and watching T2 again does nothing to make me think otherwise. This is, simply, a very finely made film.

I discovered a "Special Edition" on the DVD, which I assumed included extra footage. I'm always a sucker for those kinds of things, so that's the version I watched. The additional footage is, altogether, under ten minutes of total screentime. None of it is really essential, but for the most part, the new footage does add some texture and character moments to the movie.

Here are some random thoughts on Terminator 2:

::  I've always wished that the film's publicity campaign had not been so overt about Robert Patrick's T-1000 being the main villain. I remember zero effort being made during the film's original release to conceal this, which is a shame, because the film is clearly constructed to keep you guessing during the first half hour or so. We know that two individuals have been sent back in time, one to kill John Connor and another to protect him. Having seen the original, we'd naturally expect that the one that looks like Arnold Schwarzenegger is the one trying to kill John, so it would come as a surprise when, in the mall scene where the two meet, it turns out that the Schwarzenegger Terminator is actually here to protect John this time.

No such luck, though; the publicity campaign had the T-1000 as the bad guy and the Terminator as the good guy this time out. Oh well.

::  Additional scenes that work well include a reveal that Sarah Connor has been having her "nuclear holocaust" dream repeatedly, at the asylum. We see the dream, right up to the blast, and Connor tells the psychiatrist that the dream is the same every night. This implies that later on in the film, when we see the nuclear holocaust itself, it's also the first time that Sarah Connor is seeing it. Pretty powerful. (This is still one of the most effective "nuclear destruction" sequences ever filmed.)

::  There's another scene where John and Sarah remove the brain chip from the Terminator, and Sarah goes to smash it with a mallet, but John stops her, saying, "If I'm growing up to be a great military leader, then maybe you should listen to my ideas once in a while". The extended bits flesh out the troubled relationship John has had with his mother.

::  That said, there's a goofy scene that has John trying to teach the Terminator to smile. This probably should have remained in someone's archives.

::  T2 originally had a more upbeat ending, with Sarah Connor sitting on a park bench in Washington while John went off to Congress, or something like that. I'm glad that the special edition doesn't restore that ending, choosing instead to keep the ambiguous and haunting final scene of Sarah's narration over the footage of a highway at night speeding by.

::  I'm of mixed mind on Brad Fidel's music. On the one hand, the main theme is pretty iconic and mechanical-sounding. And the growling motif that we hear every time the T-1000 shows up is great stuff. But a lot of the underscore, especially in the action sequences, is just adequate.

::  Boy, is Dr. Dyson's family in for a rough time, huh? Their husband and father is dead, and he's involved in a plot to destroy Cyberdyne Systems. Ouch.

::  T2 is a great example of why pacing and length are not always dependent qualities. T2 is not a short movie -- it's around two-and-a-half hours -- but it is so well paced and so well constructed that there really aren't any spots where it feels as though it's lagging. James Cameron really is one of the best at keeping things going, even over a fairly long haul.

I guess the next thing to do would be to watch Terminator 3, but...I don't know. Anybody seen it? Is it worth the time?

scrawled here by Kelly Sedinger at 4:53 AM

I remember being in awe about the T-1000, I just had never seen anything like it. It's still a brilliant movie that has ages well and I think of the original ending whenever I'm driving at night.

I saw T3 a while ago. It was fairly meh...I don't remember much about it actually. Except the Elton John sunglasses after the Terminator steals himself some clothes.

By the way, thanks for the Robocop review. For some reason I never had any interest in watching it, but after reading your post I did. I was pleasantly surprised, it really is a cool movie.

I read a recent poll SOMEWHERE saying that the revelation of spoilers ENHANCES the viewing of a movie or TV show. I'm not buying it.

I need to watch T2 again. It's been a long time. T3 is my favorite, one of those movies I never get tired of seeing again and again but sometimes I feel like I'm the only person in the world who likes it because of all the negative comments I see. It doesn't feel as "serious" as the first two which, maybe, is why a lot of people don't like it. It's fun but maybe it doesn't quite fit in with the other two.

I agree that T3 is kinda fun, but I do see the lack of "seriousness" as a disappointment. As John's grown up and nuclear holocaust and the end of civilization approach, the movie needs to get grittier, not goofier. It loses a lot of the emotional power the first two managed to squeeze in between action scenes. The humor is less sly, more overt.

I would strongly recommend that, while you're in the Terminator mood and before you pick up T3, you go and rent the DVDs of "Terminator: The Sarah Connor Chronicles."

That show picks up from where T2 leaves off, and though the actors are different, it *nails* the tone of the movies. The character development is awesome, the plot gripping, the action heart-pounding, and the acting and dialogue very human and believable. One of my favorite shows of all time -- shame it only got two seasons.

I really like this one too. Like with ALIENS, Cameron really hit this one out of the park. So many memorable moments and tension.

I second Mary's recommendation. To be honest, I didn't love The Sarah Connor Chronicles. I found the continuing mother-son conflict tiresome - Sarah wanting to protect John, John wanting to be free to just be a normal kid, same thing week after week - even if it was realistic, but Summer Glau's character was fascinating. I think it was her best role since Firefly.