Last season, in keeping with my general liking of pies in faces, I decorated my football posts with this picture every time the Bills lost: 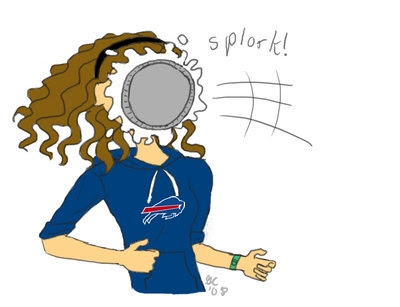 I'll still be using this one this year, but I'll be modifying it whenever the Bills actually win. So, here's to our poor lovely Chiefs fan! 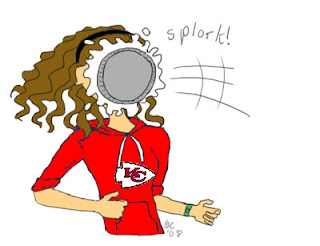 Yeah, it's a bit infantile, but what can I say? We're talking about a sport that has big guys putting on contact gear and slamming into one another at high speeds.

So anyway, what about the Bills' 41-7 dismantling of the Chiefs?

::  After a rough first series or two, Ryan Fitzpatrick settled down nicely, completing 17 of 26 passes for 208 yards and 4 touchdowns. That's a great day. And he spread the wealth around, throwing a TD each to receivers Stevie Johnson and Donald Jones, and the other two to tight end Scott Chandler. Fitzpatrick didn't have any of those "OMG please don't get picked off" throws that he seemed to air out once per game last year, either. This guy is certainly making the most of the opportunity he's getting in Buffalo.

::  And Scott Chandler? A tight end who catches the ball? And whose catches are clutch catches, including multiple scores? We haven't seen that in Buffalo since the days of Pete Metzelaars. It got to the point with him that the Chiefs were devoting lots of attention to him, which allowed other guys to get open. I can't overstate how much I am praying that this is a harbinger of what this guy can do on a regular basis. A good tight end can make so many good things happen for an offense. I've often wondered if quarterbacks like JP Losman and Trent Edwards might have developed differently had they had a decent tight end to dump the ball on and draw attention away from receivers.

::  The defense looked quite a bit more stout today, but it still has some way to go. They certainly showed that they're susceptible to the hurry-up offense.

::  Fred Jackson continues to amaze. He's just a fantastic player. I don't think he ever fails to pick up positive yardage, and there were several plays today where he ran into a pile of Chief defenders and single-handedly pushed the pile back as he forced them to yield a few more yards. What a player. I hope he's got a few years left in him. He's old for a running back in terms of years, but he's only been in the NFL for a couple of years, so in terms of mileage, he's still in his prime.

::  For Bills fans hoping that the team can still finish with the top pick in the draft and get Andrew Luck (assuming his stock doesn't drop due to a bad season), this victory doesn't help. Over the last ten years, the teams that wound up with the top pick averaged just 1.7 wins a season. The Bills are halfway to screwing themselves out of Andrew Luck!

Next week, the Bills open at home against the Raiders, a team which seems to be highly regarded for reasons I don't quite understand. They were 8-8 last year, but it was a very odd 8-8 -- they went 6-0 in their division, but 2-6 outside it. We'll see. Bring 'em on!

Fitz actually had the highest QBR rating in Week 1. http://espn.go.com/blog/nfceast/post?id=30446.