Beatles Song of the Week: "Something" 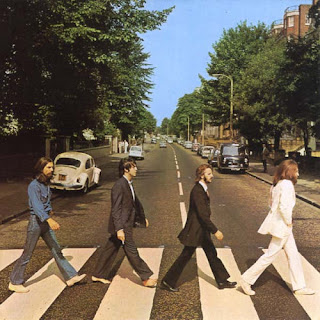 I was born forty years ago today...on the second anniversary of the release of Abbey Road, the last studio album recorded by the Beatles, and the one that has (thus far) captured my imagination more than any other. Songs like George Harrison's "Something" are why.

This ballad immediately follows the bluesy grind of "Come Together", and immediately precedes the bizarre paean to violent murder "Maxwell's Silver Hammer". The whole album is a study in contrasts and moods, and yet it feels so organic and well-considered -- I mean, what song, other than "Here Comes the Sun", could possibly follow "I Want You (She's So Heavy)"?

But as for "Something": this is clearly one of the more well-known Beatles songs, which means that it's a song I never much liked until now. (I'm a Beatles late-bloomer, as I've noted before.) Listening to it now, with an ear that is more willing to go where the song wants to take me, I'm struck by several things.

First, the lyrics are constructed in such a way that a chorus is suggested, and yet, it never really seems to get expressed. The song begins with a drum lead-in followed by a guitar progression that turns out to be the key motif of the entire song, and then the lyrics begin:

The way the song is structured, you expect Harrison to sing something more after "You know I believe and how", and yet, he falls silent as the opening guitar lick plays again, leading to a resolved chord. This happens again in the second verse:

Somewhere in her smile she knows
That I don't need no other lover.
Something in her style that shows me.
I don't want to leave her now,
You know I believe and how.

Again Harrison's voice fades away, and the guitar leads us toward an expected resolution...but instead, the song surprised with a modulation and a mid-section that changes the rhythm from the original dreamy slowness to a more insistent pattern, and lyrics that highlight the uncertainty at the heart of the song's poetry:

And then, just as quickly, the original rhythm returns, and after one of the most calming guitar solos ever recorded for a rock song, we get the final verse:

These lyrics fascinate me. Harrison is talking to someone -- he addressed them outright in that bridge section -- and we're left to wonder who. Is he talking to us? And note what he's doing in this entire song: he's describing his lover to a third party. That's dangerous territory, of course, but fascinatingly, he is very vague about her. He can only describe those properties he loves about her as "something", and "somewhere in her smile". On the one hand, he "needs no other lover", but on the other, he seems to be reassuring himself all along that this is true at all. He doesn't "want to leave her now"...but is he leaving open a possibility that he may, in the future? We don't know...and neither does he.

Email ThisBlogThis!Share to TwitterShare to FacebookShare to Pinterest
Labels: Beatles Song of the Week

Of course, in my day, NOTHING followed I Want You. Not unless you turned the record over.

I think that Patti Boyd, having both this song and "Layla" written for her, is a pretty lucky (albeit not terribly interesting storyteller, as I read her autobiography) woman