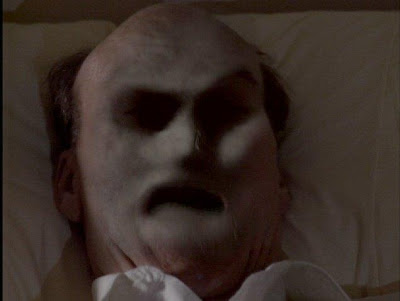 It's a bit of lore in UFO circles that astronauts saw strange things outside their spaceships during their flights in the Mercury, Gemini and Apollo days, although – of course – nothing really "official" has ever come of it. This is the basis for "Space", which is a kind of odd-feeling episode. In one way it feels overstuffed, and in another way it feels undercooked. I'm not really sure what to think of this episode, except to note that it's the first real misfire of the series.

The teaser sequence opens in the 1970s as the first images of the Viking Mars Lander come back, revealing fascinating stuff about Mars such as the oft-cited "Face on Mars", a mountain that is said to look like a sculpted humanoid face. (Of course, the official explanation by NASA and most scientists is that the mountain is a natural formation that bears little, if any, actual resemblance to a face and is only similar to it in the Viking survey photos owing to issues of light and resolution limitations in the camera. But of course, that's exactly what they'd want you to think, isn't it!)

Cut to the "present day" (meaning, 1993), when one of the early astronauts is now running Mission Control in Houston. And there's something weird about this guy, in the way his face seems to shift when he is alone in his hotel room, shifting so it looks like the Face on Mars. He flashes back to his spacewalk during a Gemini mission, a spacewalk during which he reported something coming straight at him. Will this thing rear its ugly head now, during a space shuttle mission? Naturally!

But even so, this episode's approach toward the paranormal element is kind of odd. It's understated to the point where Mulder doesn't even really hypothesize about something "possessing" this astronaut hero of his until the very end of the episode; during much of the show, Mulder and Scully are mainly doing actual FBI-type investigating.

I really don't have much to say, ultimately, about "Space", because...well, it's not that good of an episode. Nor is it really a bad one, either; it's the first one I've watched in this project that feels to me like a filler episode. Oh well; you can't win 'em all.
scrawled here by Kelly Sedinger at 10:38 PM

"Meh" pretty much sums up my reaction on this one.