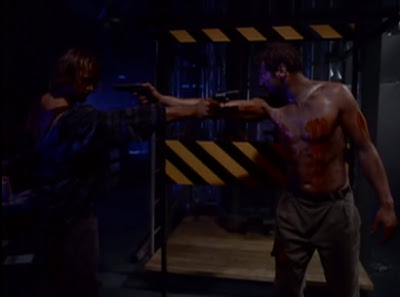 Back when I was watching X-Files episodes on VHS releases that only included six episodes from each half-season, the episodes in those packages were chosen for either story (being part of the mytharc) or quality (being judged by the producers as particularly good). "Ice" was one of those episodes in the first set of tapes, and it's a very memorable episode indeed, even if it too ends up being pretty derivative of an earlier film, in this case John Carpenter's The Thing.

We open at an ice core research station way up in the Arctic, on a glacier-bound spit of land on the north coast of Alaska. Everyone in the station is dead, save two men, who are beaten and bloodied; these two end up with their guns trained on one another – before they each lower their guns. And then, still staring at each other, they both lift their guns to their own temples. Cut to an outside shot of the station, as we hear the two gunshots. After the titles, Mulder and Scully are sent with a doctor, a biologist and a geologist to find out what happened to the expedition. What drove the original group of scientists to kill one another? And whatever that may be, is it still there?

Well, this is The X-Files, so we already know that the answer to that second question is going to be "yes". What results is a finely-crafted episode that follows the tried-and-true formula of locking our heroes in a small place, secluded from any possibility of rescue, and then giving them reasons to not trust one another.

It turns out that the scientists there had been drilling ice core samples from the glacier, which turns out to be on top of a meteor impact crater, and that something was in the ice: a worm-like parasite that invades a host and then causes it to become paranoid and aggressive. This thing got into the scientists and drove them to kill one another, and of course it's still alive and kicking. This is made quite clear by the infection of the seaplane pilot who flew our heroes up there in the first place, when he is bitten by the dog who is the only remaining living thing in the station. Thus the episode plays out as "Who is infected, and who isn't? Who can be trusted to still be themselves, and who cannot?"

"Ice" was written by James Wong and Glen Morgan, a duo who were behind a lot of the best X-Files episodes of the first few seasons, and who went on to be the main force behind the second season of Millennium and the creators of the Final Destination series of horror films, among other things. Their work is marked by excellent character writing and snappy dialog, and they manage to create just the right air of distrust among the principals, even between Mulder and Scully. Notable also is the episode's supporting cast, featuring teevee stalwarts Xander Berkeley, Felicity Huffman, and Steve Hytner (later Banya on Seinfeld).

"Ice" is a terrific episode, one of the best of the first season and of the show's early run.
scrawled here by Kelly Sedinger at 1:41 AM

I'm about 1/4 through season 4 now (nothing against seasons 1-3, but boy is it starting to get good).

I'm probably watching 6-7 episodes per week (while working out). There are a couple of things I have noticed watching in this compressed manner. 1) Scully gets her ass kicked a LOT. 2) Any time this pair sets off to some remote locale, the CDC should be on standby with a quarantine unit.