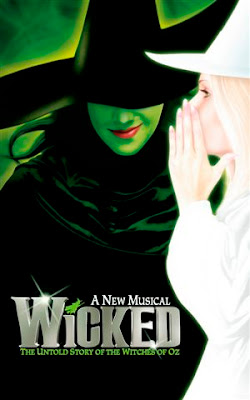 Last week, the family and I saw Wicked at Shea's in downtown Buffalo. What a wonderful, fun, amazing show it was!

The Wife read the book a few years ago when I bought it for her for Christmas, and she liked it so much that Gregory Maguire has become a "buy in hardcover" author for her. I haven't read the book (or any of its sequels), but I knew the basic thrust of the show: it's the life of the Wicked Witch of the West, from that standpoint that maybe she had reasons for being, well, "Wicked".

It's clearly not meant to be a revisionist take on The Wizard of Oz, but an addressing of themes of good and evil told by cleverly shifting the vantage point of a deeply familiar story that originally sprang from an era with a much more simplistic view of good and evil. Wicked takes into account the fact that we're all basically the heroes of our own story, and creates a Wicked Witch who is intelligent, funny, and motivated by real concerns.

I knew next to nothing about Wicked as a show when I went in, other than the story idea, but the whole thing was a delight. The songs are actually memorable and well-written (with one of them, the Act I finale showstopper "Defying Gravity", having been in my head ever since the show ended), and I loved the show's "book" (Broadway-speak for "script"). I didn't discover until intermission that the book was written by Winnie Holtzman, whose work I have long-admired (Holtzman being one of the main writers of the brilliant Once and Again). I also liked the production itself, with backdrops depicting the workings of a clock.

Wicked is a lot of fun for many of its Wizard of Oz in-jokes and references ("Lemons and melons and pears? Oh my!"), and the second act mostly takes place literally during the events of the movie, not unlike the second Back to the Future movie. The entire show sparkles with genuine wit and charm and good humor. I can't recommend it highly enough.

UPDATE: When we saw the show, the lead actress in the traveling production was out, and the role of Elphaba (the Wicked Witch) was taken over by an understudy named Mariand Torres. Her performance was fantastic, and if she's the understudy, I wonder how good the lead is! 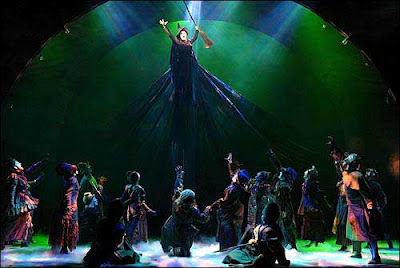 (My next Broadway production at Shea's will likely be Les Miserables, when it comes to Buffalo next February. I expect that to be an emotionally overwhelming experience.)
scrawled here by Kelly Sedinger at 9:44 PM

Email ThisBlogThis!Share to TwitterShare to FacebookShare to Pinterest
Labels: Theater

I met Maguire and bought the book; Still haven't read it. Maybe this summer.