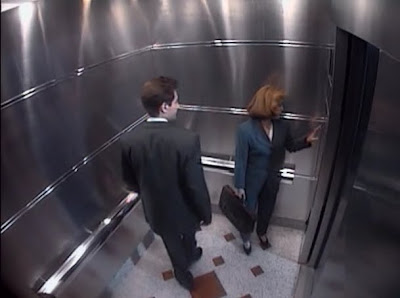 "The machine's a monster, Scully! It's already killed two people."

Looking back on some of these early episodes, it's surprising to me to see how derivative some of these shows were of other, earlier stories from movies and teevee. "Ghost in the Machine" gives us a computer run amok, a computer that's been given so much authority and sensory input that it achieves sentience and acts in self-defense. Our main villain here is the COS, or "Central Operating System", but while watching this episode, I kept thinking back to earlier computer villains: the Master Control Program (MCP) from Tron, HAL-9000 from 2001: A Space Odyssey, and the M5 from Star Trek's original series episode "The Ultimate Computer".

This episode is pretty straightforward, then, and there's really not even any ambiguity in the way it unfolds, so we're not even watching the mystery unfold for ourselves as Mulder and Scully investigate things. We know, right from the teaser, that it's the computer that's doing it all, and the rest of the episode is mainly waiting for Mulder and Scully to get there, too.

It's not a waste of an episode, by any means. The production values are typically excellent, although the episode does, by virtue of its subject matter, seem a lot more dated than some of the other episodes I've already watched. This was still the age of computers being gigantic machines in rooms, with lots of blinking lights for no reason; the word "Internet" isn't mentioned at all. Mulder's informant, Deep Throat, shows up to add some helpful paranoia about the government's interest in a computer that can defend itself, which is really when the episode starts to become more than simply a boilerplate story of technology gone haywire.

The other notable aspect of the episode is the introduction (and fairly quick dispatching) of one of Mulder's old partners, a guy who has fallen on hard times in the FBI – not unlike Mulder himself – but for different reasons. There's an interesting dynamic between these two characters, and it's a shame that the writers basically introduced this guy to provide a personal connection for Mulder's involvement in the case later on when he gets killed off.

Sorry to make this entry so short, but I'm really hard-pressed to come up with anything much to say about this episode. It's just kind of "there".
scrawled here by Kelly Sedinger at 9:22 PM

I had seen this one not all that long ago. I liked the part when Mulder's old partner takes Mulder's results and claims it as his own work. It made me think of school when a friend would ask "hey, can I copy your paper?"