Planets ending with 'is'

Time to talk about some books I've read recently.

:: Somehow, in my life as a science fiction reader, I'd never read Dune until just a few weeks ago. Now, that's nothing really abnormal; there are lots of SF classics I haven't read. I haven't read Dhalgren. I haven't read The Book of the New Sun. I've read only one of Banks's Culture novels. I still haven't read A Canticle for Leibowitz. And I haven't read...well, you get the idea. 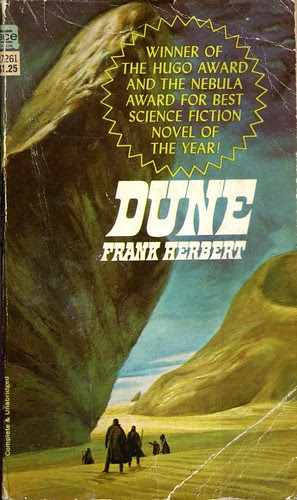 So, why not Dune? I actually started it, ten or eleven years ago, but it either didn't grab me or something else came along that I wanted to read more. I do recall that my first attempt at Dune flummoxed me a bit because I had to flip back to the book's glossary so often that it threw me out of the book a lot. Still, I always intended to return to Dune, and I finally have.

This just in: Dune is a great book. Water, also, is wet.

Again, as before, it took me a while to get into Dune, and this time I just generally found a certain coolness to the overall emotional tone of the book. Everything felt like it was at a distance, somehow. This isn't a criticism per se, but I found myself admiring the book more than really getting involved in it. But still – it's a great book.

What makes the book great are a combination of factors. First, the setting, the desert planet of Arrakis. Yes, I've seen desert planets before, but Dune was there before all of the ones that I've seen, and Herbert imbues this world with an impressive sense of scale and an even more impressive sense of importance. Whenever you depict a world where conditions are about as harsh for humans as can possibly be, you need to create a reason for them to live there, and this Herbert accomplishes impressively. (The reason is, of course, the spice called "melange", which is important because...well, that's beyond the scope of this post.)

Even better is how Herbert is able to depict the society that lives on Arrakis, the nomadic-bedouin-like Fremen. Herbert brilliantly depicts just what the effects upon society would be on a world where water is as precious as it is on Arrakis, as people have to wear special suits that reclaim every bit of moisture their bodies excrete, and Herbert has thought things through to the point where an act that we on Earth wouldn't even think twice about – like spitting – is deeply significant on Arrakis. Herbert's attention to detail is superb, and he packs a lot of detail into the book.

Oh yeah, and sandworms. Sandworms are all kinds of awesome. I won't say anything more than that.

As noted above, I wasn't as emotionally involved in the book as I like to be, but the book's other strengths compensated for this. Part of the problem was the glossary-flipping I had to do a lot of this time around as I did the first time; another part is Herbert's structuring the novel by including quotes from fictional texts of his world before his chapter. This device does create some dramatic tension in one key respect – establishing that one particular character is a horrible traitor well before the treason happens – but in other ways, those text quotes were sometimes distracting.

I'm not sure if I will read Herbert's sequels to Dune. I own them all, having picked them up at library book sales, but the general consensus out there as I've sussed it out seems to be that the sequels aren't nearly as good as the first one and that they drop in quality each time out. We'll see.

:: I suppose that most casual SF fans are only aware of Leigh Brackett, if at all, as the writer of the first draft of the screenplay to The Empire Strikes Back. Brackett was a prolific SF writer during the middle of the 20th century, though, and she produced a lot of fine space opera and planetary fantasy stories. In fact, Leigh Brackett is required reading for anyone interested in those strongly-related SF subgenres, and not least because she was simply a fine, fine writer.

I've only read a little bit of Brackett thus far, but I've loved everything of hers that I've read to date, and I can now add to that list of titles her novel The Starmen of Llyrdis. 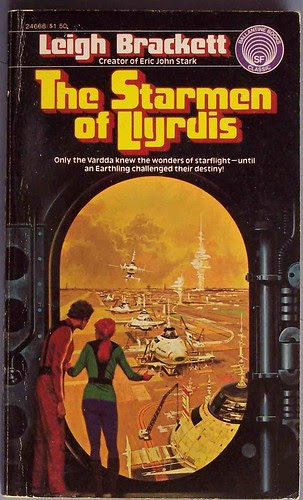 A human male, Michael Trehearne, is approached by a beautiful girl who tells him that he looks like one of the Vardda, a race of humanoids who are the only beings in the galaxy who can travel between the stars. This gives them a monopoly over all interstellar trade, and most of the planet-bound species in the Galaxy hate them for it.

Trehearne is brought into the fold as a Vardda, but at the same time, he is viewed with suspicion by them, a suspicion that manifests throughout the book in betrayals and schemes and plots against him. Eventually Trehearne learns a deep secret of the Vardda: the fact that many years before, one of their scientists had figured out how it is that the Vardda can travel the stars, and how to give that ability to other species. Trehearne is now at the center of events that could change the galaxy forever.

Brackett's writing is poetic and beautiful as she weaves a tale of adventure and galaxy-spanning mystery that even has a few action set-pieces. The story is a bit heavily skewed toward the male end of the spectrum, as might be expected of a book written in 1952, and in terms of style, there's not a lot of humor in the book. But those are quibbles that are better taken in the context of the era in which Leigh Brackett wrote, and The Starmen of Llyrdis is a fascinating and entertaining space opera.
scrawled here by Kelly Sedinger at 7:03 PM

Email ThisBlogThis!Share to TwitterShare to FacebookShare to Pinterest
Labels: From the Books, Skiffy, Space Opera

Well I guess I should have stopped after reading one book and then not moving any further, I hate that you gave half a thumb up.

Dune - I loved all three books in the orginal trilogy. They form a complete story. After that, the later books in the series were a waste of time.

Cal! I give it a full thumbs up! Really! I just wasn't gripped by the book. It took until Paul and his mother rendezvous with the Fremen that I began to feel the book's forward momentum kick in. Full thumbs up! Honest!

Lynn - yes, the first three made a great trilogy. After that, it became a franchise.
Jaquandor - my feelings were similar to yours; it was a great book, a great trilogy, but it's not on my list of books that I come back to time and again to enjoy the world that Frank Herbert created.