Well, I haven't blogged seriously in a few days, so what better way to get back into the swing than with some high-power geekery? Some stuff, then:

:: Brent Spiner, who played Data on Star Trek: The Next Generation, is seemingly mad at Trek fans because Star Trek Nemesis tanked:

"We worked on the story with the intention of making it for the fans," Spiner said. "With every Star Trek movie prior to that, we tried to find a way to bridge the gap between the fans and the general public. With 'Nemesis' we said, 'Forget that! Let's make a movie for the fans, because that's the people who actually go to see the films.' And what happened? They didn't go!

"Usually the films opened big, even if they had a lot of competition, but 'Nemesis' didn't even do that. That was a message from the fans that they were done with us."

Well, Spiner's leaving something out of his analysis here: namely, that Nemesis was an embarrassing piece of crap. And in the Internet age, it's not bad enough that they made a really bad movie: the script had leaked to the Internet at least a year before the movie's release, so the fans who Spiner thinks should have at least flocked to opening weekend already knew that the movie was terrible.

What really rankles, of course, is Spiner's apparent belief that it was the fans' obligation to come see their movie, no matter how bad it was.

:: Well, shit. According to AICN, Joss Whedon is no longer on the Wonder Woman movie project. That's disappointing; I'd hoped that Whedon would be able to make for a good movie about Wonder Woman, as opposed to the seemingly inevitable cruddy superhero movie about her. I suppose a good movie could still be possible -- the Spiderman flicks are good, Superman Returns was good, and I've heard good things about the most recent Batman movie -- but Joss Whedon could have made it really special. Bummer.

I'm trying to think of just who would play Wonder Woman anyway. Most likely an unknown actress would be the best way to go, preferably someone with Greek beauty and looks. But if they can get this production going in the next couple of years, I just may have the perfect actress for Wonder Woman in mind, and unless you're a fan of CSI: Miami, you probably have no idea who she is. I'm thinking of Sofia Milos: 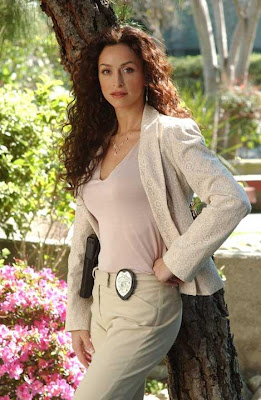 Now doesn't she look like a Wonder Woman in waiting? You be the judge!

Quit rolling your eyes, older readers. It's been a long time since I posted these!

Anyway, apparently there's a new script for Wonder Woman around that is set in the character's original World War II-era setting. I have a feeling that would have limited appeal to audiences, even though I personally greatly enjoyed "period" hero flicks like The Rocketeer, Sky Captain and the World of Tomorrow, and The Phantom. We'll see.

scrawled here by Kelly Sedinger at 9:47 AM