Dispatches from the Boston PD

BOSTON -- Still smarting from their recent partial shutdown of the city, which was perceived nationwide as a staggering overreaction to what was later uncovered as a viral marketing ploy, the Boston Police Department is now facing questions about its conduct in investigating another bomb scare last month.

"There was clearly intent to harm civilians," said Detective Duncan Shaun O'Reillyhughe the Third. "The surveillance tape clearly shows the suspect wiring a piano to explode with ten sticks of Grade A dynamite from the 'ACME' corporation."

The scheme, as explained by Detective O'Reillyhughe, was for the bomber's quarry to approach the piano and plink out the tune written out on the manuscript paper on the instrument's sheet-music holder. The tune, as identified via surveillance tapes of the scene, was 'Believe Me If All These Endearing Young Charms'. The dynamite was wired to the 'C' key one octave above middle-C, with the expectation that the bomber's quarry would hit that note and then be destroyed in the explosion.

Fortunately, the bomber's quarry proved to be a poor musician, and repeatedly struck the tones to either side of the high-C, eventually prompting the bomber -- a short man with red hair, beard and mustache, and tall cowboy hat -- to come to the keyboard himself to demonstrate. Surprisingly, in the resulting explosion, the bomber was unhurt save for the singing of his hat and facial hair. His quarry, who was dressed as a rabbit, escaped unharmed.

Boston police acted on a tip about a man matching the bomber's description, going from bar to bar in the downtown area demanding to know if anyone had seen a "flea-bitten varmint". When police arrived on the scene, the bomber ran from them, shouting that "no lawman would ever catch him". Police then gave chase, Detective O'Reillyhughe said.

Accounts from here differ as to what happened next. According to Detective O'Reillyhughe, the official police report states that the piano bombing suspect ran down a dead-end alley, but when pursuing officers arrived, the suspect was gone. However, a homeless man who was sleeping in that alley says that the suspect was able to escape by hastily painting a tunnel onto the wall and then escaping into it. The pursuing officers attempted to give chase into the painted tunnel, only to be forced to evacuate when a light therein indicated an oncoming train.

"These two individuals, the bomber and the unidentified 'varmint', are highly dangerous," Detective O'Reillyhughe said in his statement. "We are releasing their photo, taken from the surveillance cameras on the scene of the piano bombing, in hopes that someone in Boston will recognize them." 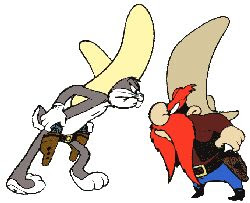 scrawled here by Kelly Sedinger at 5:22 AM