Your Daily Dose of Christmas 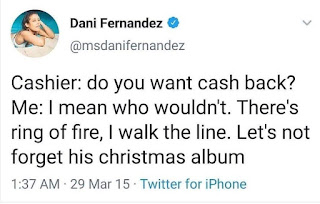 And I saw that just as I was starting to think, "Hmmm, I wonder what I should post for my Christmas music of the day?" I love how every once in a while, the Interwebs anticipate my needs.

Here is some Johnny Cash for your wintry morning. (Well, very late autumn, I suppose is technically correct...and as I look outside at this moment there's not much "winter" in evidence yet. We're having one of those years where winter seems to be a slow developing thing, as opposed to other years where at some point in October or early November winter shows up to shout "HEY! I'M HERE!!!" as it wallops us with snow. Right now it's just eternally damp and muddy. What were we talking about? Oh yeah, Johnny Cash. Sorry about that; I'm writing this as the coffee is only just starting to kick in.)

There was always something special about Johnny Cash's voice that I could never put my finger on. It really shouldn't work, that gravelly baritone that doesn't always home in on the exact pitch the way a singer should. Sliding into a pitch instead of hitting it dead on is a standard device of country singing (Reba McIntyre and Garth Brooks are canonical examples of this technique), but what Cash does is...more than that. Sometimes he sounds like he's perfectly content to waver in the vicinity of the actual pitch without actually getting there. If you heard a young music student singing like that, you'd question their ability. When you hear Johnny Cash doing it, you know that you're listening to a master who is doing exactly as he wishes with his voice.

Most of all, though, that guy knew how to home in on the emotional content of a song and use his instrument to make it work. He never stresses the wrong word or puts the em-PHAS-is on the wrong syl-LAB-le, and he somehow makes it sound like every song he sings was written for him and him alone, no matter if he actually did write it or if it's an old standard like "White Christmas" that has been sung by everyone, some of whom are icons with every bit as much stature as Mr. Cash.

scrawled here by Kelly Sedinger at 9:26 AM

Email ThisBlogThis!Share to TwitterShare to FacebookShare to Pinterest
Labels: Daily Dose of Christmas