A Fourth of Beethoven 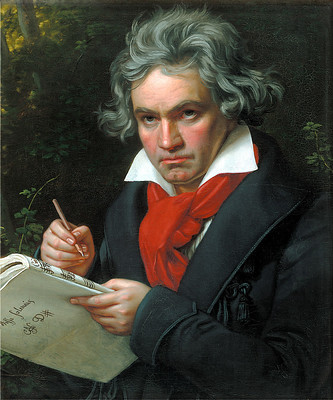 I often feel a bit sorry for Beethoven's Symphony No. 4 in B-flat major. It just doesn't get talked about that much. Symphonies 1 and 2? Those get discussed as the early works they are, when Beethoven was just starting to move beyond the Haydn and Mozart influences on his work. Then, of course, comes the epochal milestone in music that is the Third, the mighty Eroica, famed for the original dedication to Napoleon Bonaparte, which Beethoven ripped asunder when he learned that his French hero had declared himself Emperor.

And of course, there is the Fifth, the great and glorious Fifth, perhaps the single most performed symphony of all time, a work whose opening bars comprise music that is as familiar to the ear as the Mona Lisa is to the eye. Even the Sixth, the Pastoral, gets more respect than the Fourth, with its wonderful rustic tone-painting.

Rivers of ink have been spilled over the centuries since the Seventh arrived, one of the grandest masterpieces in all of music history, and even the Eighth--the slight, small, intimate Eighth--gets some love here and there. And we'll come back to the magnificent edifice that is the Ninth later this month. But there, seemingly alone in the middle of the most perfect collection of symphonies ever composed, is the Fourth, the sunny and genial Fourth.

There is no "Fate knocking on the door" here, nor is there a funeral march in place of a traditional slow movement. There is no "apotheosis of the Dance" to be found in the Fourth, nor is there a plaintive depiction of the woods around Vienna that Beethoven loved so much, and certainly there is no wonderful hymn to Joy.

All there is in this work is Beethoven smiling.

The first movement kicks off with a long minor-key introduction, perhaps hinting at serious thoughts to come...but when we arrive at a series of chords that finally resolve into our home key of B-flat, all the clouds disperse and what follows is pure sun and cheer. The genial mood carries into the slow movement, which is dominated by a pulsing rhythm that puts one in mind of Haydn's "Clock" Symphony, with the same degree of amiability. Toward the end of the movement there is a moment of pure delight as the horn, clarinet, flute, and strings exchange arpeggiated passages.

Our third movement, a scherzo, doesn't thunder or storm the way Beethoven scherzos often do. This one flits and jokes, with Beethoven giving us rhythms that don't quite feel like they line up. There is some fantastic writing for the woodwinds in this movement, especially for the bassoons in the middle. And the finale is pure energy, not quite as propulsive as what would come later in, say, the finale to the Seventh, but compelling in the forward momentum of its moto perpetuo construction, before it finally arrives at the thrilling coda.

Why has the Fourth never quite become as beloved as so many of--if not all of--the other eight of Beethoven's symphonies? I honestly do not know, but I wonder if part of that is because we often seem to like our Beethoven with at least some of his characteristic darkness. We want to hear at least a little of the man who shook his fist at the thundering clouds when he was on his deathbed. We're not sure what to make of this odd Fourth symphony, a work in which this composer who went deaf and who struggled mightily to make musical sense of the ideas he scrawled in his notebooks seems to be largely in a mood of brightness and good cheer.

Maybe, maybe not. All I know is that I really do love the Fourth.

I played all nine symphonies last month (early to make room for Xmas music). You're absolutely right about the 4th.