The Chairman of the Board will see you now. 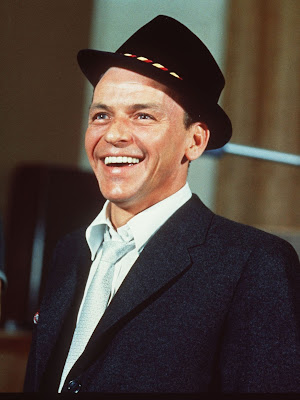 Sheila O'Malley has a typically lovely post about Frank Sinatra, whose birthday is today. I started composing a comment on her site, but then I realized that my thoughts were getting away from me, so I decided to bring it over here. Sinatra has been a part of my universe for as long as I can remember; my parents owned a bunch of his records, which were on constant rotation in my childhood. I remember his distinctive sound, sometimes clear and sometimes with just a hint of rasp (depending on what he wanted to express), his sense of rhythm (he could make a song swing without any assisting percussion at all), his lyricism, and his unfailing sense of how to land the emotional beats of a song. This last gift is rare indeed, and it's interesting to me that I'm featuring two singers so highly gifted in that regard on the same day (scroll down to today's Daily Dose of Christmas post). And of course he wasn't just a singer; Sinatra was also a very fine actor with a lot of range. He was in a lot of movies and he won an Oscar along the way and he still might be underrated as such.

The earliest of his roles that I've seen is Anchors Aweigh, in which he plays a Navy sailor who is very young and naive, who has to be instructed by his older buddy Gene Kelly in the ways of the world (meaning, how to flirt without seeming weird about it...in the late-1940s meaning of 'flirting'). Somehow he pulls this off without getting blown off the screen by Kelly; in fact, the two men have a partnership in that movie that elevates it. Anchors Aweigh isn't quite one of the immortal musicals--it's no Singin' in the Rain--but it's damned close.

Just eight years later Sinatra put his dramatic skills on display in a dark turn as Private Maggio in From Here to Eternity, a movie that hit me between the eyes when I watched it in high school. I was channel-flipping lazily, and I happened to land on the opening credits; next thing I knew it was two hours later and the movie was over and I hadn't touched the remote the entire time. Sinatra plays the cocky, arrogant young hothead whose actions end up costing him everything. There are some weird stories--legends, actually--about how Sinatra got the role in the first place, but it doesn't really matter how he got it. The man ended up winning a Best Supporting Actor Oscar for it, and there's a reason for that. Last time I watched From Here to Eternity I found it every bit as gripping as I did when I accidentally watched it as a sixteen-year-old.

Sinatra would bounce in and out of musicals a lot, and his dramatic turns always seemed to be in the crime genre. There was a teevee movie in the 70s called Contract on Cherry Street that I remember, and there's his amazing performance in The Machurian Candidate. He even turned up in the 1980s in an episode of Magnum PI, a show that often leavened its generally light-hearted tone with detours into espionage thrillers and, in the case of Sinatra's episode, pure noir.

Maybe it's easy to discount Frank Sinatra a little because of the genres in which he worked or the popular forms he pursued, but for my money, you can't tell the story of American art in the 20th century without talking about Frank Sinatra.

Sheila starts her post with this quote (possibly aprocryphal) by Bing Crosby: "Frank is a singer who comes along once in a lifetime, but why did he have to come along in mine?" I can't read that quote without thinking of High Society, a movie that was also a favorite of both my parents. It's a musical remake of The Philadelphia Story, with Crosby as C.K. Dexter Haven (the romantic lead who is pining for Grace Kelly), and Sinatra as Mike Connor, the gossip rag reporter sent to cover Kelly's impending nuptials. (Those roles were originated by Cary Grant and James Stewart, with Katherine Hepburn in the later-Grace Kelly part.) High Society is a fun movie, though this story is really better told in the original, as parts of the script had to be set aside to make room for the musical numbers, and...well, I have to agree with my sister, who once said on a Christmas Eve when one of Crosby's Christmas movies was on and we'd all taken in a few beers, "Whoever thought to cast Bing Crosby as a romantic lead was out of their mind."

Well, I don't know about that, but it's always struck me as very strange that this movie has Bing Crosby and Frank Sinatra together, and it gives them exactly one number together...and that number had to be added at the last minute when the producers suddenly realized that they had Crosby and Sinatra in the same movie with no shared numbers. Astonishing! Can you imagine such a thing? Almost making an entire movie with two of the 20th century's greatest American singers in it and only realizing near the end that you've given them zero duets? That's like having Babe Ruth and Mickey Mantle on the same team, but benching one of them at all times. Luckily for High Society, that one number is a hell of a number:

Of course, I can't write about Sinatra without discussing his singing a little bit. Many years ago I read an interview with one of my personal musical heroes, the great Chicago Symphony orchestra trumpet player Adolph Herseht, in which among many other things he recommended that young trumpet players (among others) listen to great vocalists like Frank Sinatra, on the basis that all music, even for instrumentalists, starts with the human voice, and I remember Herseth citing Sinatra for always telling a story with his singing. That is absolutely true.

I'll close this with my favorite track from my favorite Sinatra album, Frank Sinatra Sings for Only the Lonely. Just listen to Sinatra's absolute control in this song! He fades away at the end, fading fading fading ("Answer, echoes, dying dying dying," Tennyson might write), but his pitch never wavers, which is something that requires enormous technical skill: singing (or playing, if you're on an instrument) a note correctly, and making it sound full, while also making it piano or pianissimo is a skill that many musicians don't realize they need until well into their careers. And I'll have to write sometime about my father's favorite Sinatra song...but that needs a post of its own.

I always remember Frank's bday. It's the same as an ex-gf's, who I called yesterday. He hated Frank, for some reason.

1. I have a couple Columbia V-discs, the Capitol box set, the Reprise box set, and at least one of the Duets albums.

2. We gonna get Xmas Frank? I have this really weird Christmas CD with Frank and Bing from some TV or radio special, clearly recorded off an LP, that I bought in a grocery store. (I know it's off an LP because one hears a skip.)