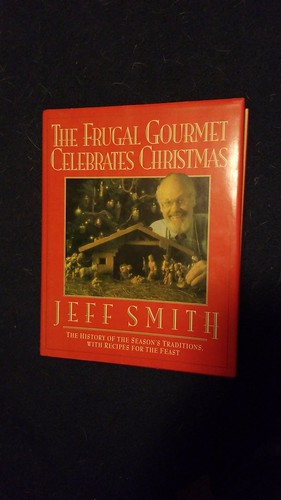 Back when I was in college, I decided that I needed to start learning to cook. One of the cornerstones of that effort was to buy all the cookbooks by Jeff Smith, also known by his PBS brand name "The Frugal Gourmet", and read them cover to cover while also cooking quite a few of the recipes. I learned a hell of a lot about cooking in that way ("Hot wok, cold oil, foods won't stick!), and while I think Smith's notions about food and peacekeeping were a bit out there (one of his last cookbooks has a very odd passage in which he envisions Bill Clinton and Saddam Hussein cooking together), I very much agree with his insights about food and memory. There's a reason why, when a beloved elder dies, a lot of times those left behind despair over being able to replicate their best dishes. "It's good," we say. "I've got it pretty close, but there was something she did that I can't quite get my finger on."

I still own most of Smith's output to this day, and a few of his recipes are in my permanent rotation. I have never stopped reading them or even watching some of his shows which have shown up on YouTube, even though...

Smith, it turned out, was really not the kindly pastoral gentleman he portrayed on his shows. I don't really want to get into that here, but suffice it to say that there were accusations of sexual improprieties in the late 90s that brought his career to a slamming, screeching halt. If you search around the Internet, you can find other testimonials about Smith that are, shall we say, less than flattering. He may have spent many years not even living with his wife (speculations as to why that may have been abound), and he seems to have been an unpleasant fixture in the Seattle food scene toward the end of his life. Again, I don't want to get into that.

It all comes back as we have discussions in society today, quite repeatedly, about what we do when people we admire, especially the creative folks whose works have touched and shaped us, turn out to not only be very human, but very disappointingly human, at that. JK Rowling turns out to be transphobic to a deeply creepy degree. Isaac Asimov...well, rumors abounded about his conduct at science fiction conventions for years, and they don't seem to have gone away despite his being dead for nearly thirty years. Marion Zimmer Bradley's private life was appalling, and Orson Scott Card turns out to be deeply homophobic. Michael Jackson.

We all have to struggle with to what degree our artistic heroes were real people who committed acts ranging from missteps to simply awful deeds. I've known this for years, since I obsessively read about music history as a kid. My favorite composer, Hector Berlioz, was an addict and a manipulative stalker weirdo. Robert Schumann obsessively pursued a girl who today would be a minor and basically forced her to give up almost all of her own musical career outside of helping to perform and advance his works. (Clara Schumann was, by all accounts, an amazingly talented woman who might well have become a beloved composer in her own right, had husband Robert not dominated her so completely.) Richard Wagner? Well, as David Dubal writes in The Essential Canon of Classical Music, in reference to Wagner's "Siegfried Idyll", a gorgeous piece he wrote as a wedding gift for his wife, "That this man, capable of such emotion, was enraged at Bismarck for not burning Paris to the ground will always tantalize and disturb."

So...back to Jeff Smith, among whose cookbooks is the one pictured above, a quite wonderful volume of Christmas recipes and ruminations about our modern Christmas. (Well, not quite our modern Christmas! This book is almost thirty years old.) Smith presents an entire Christmas menu, based on those present at the Nativity: dishes for Joseph, for Mary, for the Innkeeper (whom Smith believed has gotten kind of a bum rap over the years) and the tax collector. There are dishes for the Wise Men, for the angels, and even for the donkey (who gets "Straw and Hay", which is now one of my best pasta dishes). The book has cookie recipes, recipes for mincemeat pie and two kinds of fruitcake--I want to like fruitcake but I can never get there!--and more. He finally presents several complete Christmas dinner menus...and the photographs throughout are wonderfully colorful, as well. There's a reason I love this cookbook: it's the kind of cookbook you can thumb through with pleasure, in addition to having good insights on food.

In the middle of the book comes this section, about Christmas traditions. This has been one of my favorite pieces of Christmas writing ever since I bought this book in the 90s, and if it is coming from someone who would later turn out to be quite a lot less than the sum of his parts, well...that's frankly the case with most art, isn't it? It's up to us to decide how much these things bother us, and which things are our personal dealbreakers.

From THE FRUGAL GOURMET CELEBRATES CHRISTMAS

Patty and I originally made a prime rib of beef for Christmas, and then the boys came along. Somehow Patty got into the roast goose routine, and we enjoyed that for years. As the boys grew, we began to celebrate one of the Christmas menus that follow, and then on Christmas Day I would prepare a full Norwegian smorgasbord with baked beans, potato salad, several different kinds of herring, luncheon meats, special breads, fish balls in cream sauce, cold salmon or lox, lefse, Christmas bread, and, of course, the leftover roast beef or goose from the night before. We still do that.

Last year I did a Swedish meal of pickled pork. The Paulina Market in Chicago makes a Swedish pickled fresh ham that is just terrific. So, now we all have a new favorite dinner. The boys side with the goose, Patty with the roast beef, and I go for the pickled ham. Now what do we do?

One year I suggested to Jason that we make some changes in our Christmas dinners. Try something new. He was quite young at the time, but his response meant that we had established some family traditions that he wanted to maintain. I was so touched by his insight that I wrote the following letter to him, a letter that was circulated by the Roman Catholic parish in Chicago. You will probably recognize your own family in this letter.

I probably came very close to violating the meaning of tradition when I suggested that we try something a bit different this year. You are happily bound up in memories of Christmases past, and I expect that I will hear you say, "Dad, can't we have real dressing? I mean the old kind. After all, it is Christmas!"

You are right, son, it is Christmas. And on the day of the Mass, the feast of Christ, I should not go around breaking family traditions.

But I must consider anew the meaning of the Feast of the Christmas, and I think you and I should think about it together.

The term feast is very much involved with the meaning of memory. We feast because we remember certain events in our lives; sometimes wonderful events, sometimes painful events. That seems to be the way it has been with man- and womankind for a long time.

Christmas for me as a child was very different from our Christmas now. We would travel to greet my father's family at his mother's house, your great-grandmother, Nettie Smith. Oh how sad I feel that you did not know this tough old girl. She was a member of the state legislature and she was a left-winger from the start. But in the kitchen she was just terrible. She cooked turkey in the Old Testament style, burning the poor thing on the altar until smoke drifted up to heaven. Then, to the table it would come, though it was so dessicated, so dried out, so tasteless, that I could not understand why someone else in the family did not cook the bird instead. You know why they did not? Because it was job traditionally reserved for Gramma. To this day, when I eat dried-out turkey, I think of her...and how much I miss her.

Christmas morning in my family was wonderful. World War II was in the midst of every event, and candy and sugar were hard to find. One Yule morning my mother, your Grandma Smith, brought us to the table and presented us with marzipan candy shaped like eggs and bacon. My brother, Greg, sister, Judy, and I were amazed that Mom could find such things.

Some of our Christmas traditions are a bit strange, I will admit. But they are our traditions, our family. Each year we carefully unpack the papier-mache manger figures we made together when you and Channing were tiny children. And each year we spend precious time gluing the poor shepherd boy back together. Would it not be much more practical simply to go out and buy a new creche, a new king, a new Christ child? Ah, now, my boy, we are speaking of utter heresy, of violations against the meaning of our past...and I suppose therefore, our future.

A true feast actually has nothing to do with what you eat...but with what you remember. Many families in this nation have no traditions at all, few roots, and thus, few feasts. I am for feasting and celebrating in such a way that we will always remember we are a family. Sometimes I know that it is tough having me for a father, since I always want to add sherry to a gravy that you find perfectly in order already. Or I want to put mushrooms in a dressing, and you claim that they taste like dirt.

So, now, back to the kitchen. We have much to prepare before the star grows bright over the manger and you and I come to the creche, dazed by what we find, but carrying two gravies. One with mushrooms, and one without.

Christmas is as much a time of memory as it is of anything else, and food is memory.

Email ThisBlogThis!Share to TwitterShare to FacebookShare to Pinterest
Labels: Food, From the Books

Sort of related, a 20-minute video about Fatty Arbuckle, who was acquitted of the charge but still never really recovered commercially, even decades after his untimely death.