The Ninth: One Symphony to Rule Them All 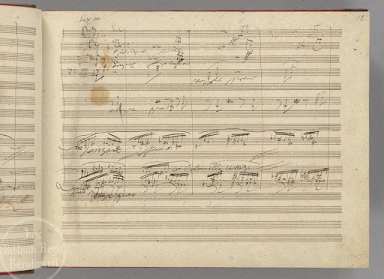 I'll have one more Beethoven-related post to wrap this all up, which will mainly be a linkage piece; this post will serve as my main Grand Finale, though. And where else to end with Beethoven's juggernaut of a masterpiece, the Symphony No. 9 in D minor?

Whether or not the Ninth is Beethoven's greatest symphony is a matter of debate, and I'm not going to join it here. The main contenders seem to be the 7th, 5th, and 3rd, each of which have strong cases to be made. For me it comes down to the 7th and the 9th, and I probably have a stronger personal attachment to the 9th, since it was my first real deep dive into Ludwig van Beethoven's symphonic world. Quite a starting point, eh?

It was when I was in high school and becoming keenly interested in symphonic music, to the point that I was examining orchestral scores in an attempt to unlock what secrets I could, with my level of training to that point. (Which was, ahem, not much. But I went ahead undaunted!) I remember the bookstore: A B. Dalton (remember those?) in the Monroeville Mall outside of Pittsburgh, when we were there visiting my sister, who was in college. There was a Dover edition of Beethoven's Eighth and Ninth Symphonies, in full score.

Dover Publications used to make wonderful copies of music scores in fine books...and apparently they still do! I just now Googled the folks at Dover to see if they were still around, and there's an active website, so that may be a place that starts taking my money soon...but anyway, I remember picking up the book in that B. Dalton and thumbing through it. At this point I knew nothing at all about either work, so I was completely baffled when I flipped to the last movement of the Ninth and saw...music for voices?

Was this a choral symphony?

My sister actually gave me that book for either my birthday or Christmas that year; I procured a recording not long after. My band director dubbed me a cassette of the Ninth, and off I went. The recording was Herbert von Karajan, conducting the Berlin Philharmonic. You never forget your first Beethoven Ninth.

That the Ninth captivated me utterly is unsurprising, as it has been captivating its audiences ever since Beethoven wrote it. The premiere is one of the legendary events in all music, with the deaf composer sitting on stage as his work crashed and hummed all around him...and he heard none of it at all. Imagine the poignancy of one of the musicians, alto soloist Caroline Unger, at concert's end, putting her hand on Beethoven's sleeve to turn him toward the audience, that he might see what he could not hear: their applause. When you listen to the Ninth, as with all of Beethoven's late works, you are hearing the musical realizations of a man who could only 'hear' the work in his mind.

Beethoven's Ninth went on to become one of the most influential works of music ever written. He fired the imagination of many composers with this work, and indeed, the Ninth took on a nearly mystical air as the 19th century wound on. The Ninth was one of Richard Wagner's favorite works, and it was deep inspiration to both Anton Bruckner and Gustav Mahler, both of whom felt superstitious angst as they approached their own ninth symphonies, as if Nine was a sacred barrier beyond which a symphonist dare not tread. Mahler, having already written eight symphonies when he set out write Das Lied von der Erde ("The Song of the Earth"), thought he might cheat the limit of Nine by not titling this work as a symphony, even though everyone believes it is. Even so, it didn't buy Mahler much time: he would write his actual Ninth symphony and then die with only a few sketches written for his Tenth.

The Ninth is one of classical music's true "event" works, often being programmed for concerts that are meant to commemorate specific events. One of the most famous of these was in 1989, when Leonard Bernstein conducted the work in East Berlin, leading an orchestra and chorus drawn from many nationalities. For this concert Bernstein changed the fourth movement's focus from "joy" (Freude) to "freedom" (Freiheit), in celebration of the fall of the Berlin Wall just a few months earlier. There really is a universality to Beethoven's Ninth that lends itself to such things. It's a deeply human work, encapsulating the tortured journey toward joy as imagined by a great composer brought low by deafness.

I thought about writing a lengthy annotation of the Ninth, but time didn't allow, and besides, I'm not sure if such a thing is really necessary. But there are so many moments in the Ninth that are sheer magic. Here are some of the spots that capture my imagination:

:: The opening bars, with the strings in tremolo, playing only the tonic and the dominant, so we don't even know if we're in major or minor key. It's an opening of total mystery, leading to a stormy march of a movement that is sheer musical relentlessness.

:: And that fiery scherzo, whose opening motifs echo the main theme of the first movement, but in a rhythm that drives, drives, drives forward. Even the timpani gets into the act, pounding out that rhythm in moments that seem to come out of nowhere, no matter how many times I hear the work. But wait! Halfway through the scherzo, Beethoven changes his original time signature and provides, charmingly shocking, a genial "drum and fife" section that eventually yields back to the original scherzo.

:: The double variation of the third movement? I used to have trouble with this movement, not really understanding what Beethoven was up to. It's certainly a very long movement that leads us into the depths of Beethoven's mind, as one of the great writers of variations in music history. Somehow Beethoven finds new and enthralling textures each time he winds his way through the long melody that sustains the movement, and then toward the end come the two sets of giant fanfares that are answered by the strings. The woodwinds sing throughout, and the time is marked by pizzicato strings. It's an amazing movement that once bothered me.

:: And then we arrive at the fourth movement, that gigantic movement that is by itself longer than some of Mozart's entire symphonies. A stormy passage opens, leading to a remarkable passage where Beethoven quotes each of the first three movements, almost questioningly, only to have the low strings reject each one. After one last declaration by the low strings, we finally arrive where the entire symphony has been leading all along: the famous "Ode to Joy" chorale theme, played first by pianissimo low strings. Beethoven repeats the theme four times, adding to the voices each time (my favorite is the second statement of it, before he adds in the violins but also writes the most wonderful countermelody for the bassoons).

Then the original stormy passage from the movement's opening bars reprise, before we hear the first of our voices: the baritone soloist, declaring that it is time for a more joyful sound. "Freude!" he cries out, and the choral passage arrives, with the soloists leading through a set of variations on the chorale theme, variations which are answered by the chorus, all of this building to an immense chord that is one of the greatest single chords in all of music...and then the bottom drops out and a Turkish march begins, with Beethoven doing one of his favorite tricks of off-setting the beat.

I won't describe more than that, save to note that the symphony's closing moments are one of classical music's true moments of magnificence. I have never heard the Ninth in a live performance, but I can only imagine that if performed well, it can be an almost overwhelming experience. There is a vastness to the Ninth that makes it a colossus in itself, but this is not at all unique to the Ninth: Beethoven's greatest works all enjoy this expansive quality, but none are quite so big in their concept as the Ninth. Few works achieve this sense of containing a universe in itself. With the Ninth, Beethoven moved beyond composing music and instead created a world.

scrawled here by Kelly Sedinger at 8:32 AM

I have heard the 9th live several times but the best time was the Boston Symphony Orchestra when I was sitting in the third row near the cellos and basses. The music surrounded me and vibrated every cell in my body. It was thrilling!