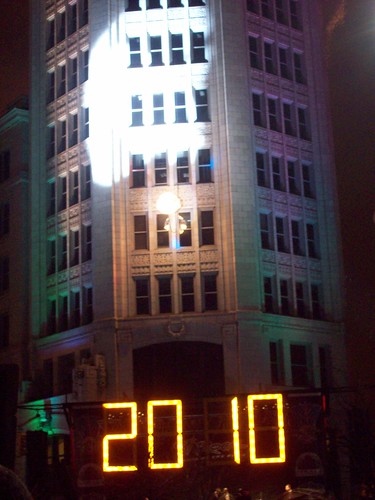 Wow, not just a year ending, but a decade!

Here is a selection of my favorite posts from the last ten years. How much longer will this go on? Who knows! I'd like to get back into more essay and photo content around here than the YouTube music selections, so here's hoping.

"Thy world, O master of the world, thy dawn: Reflections on On Her Majesty's Secret Service
On That Day

Tip Your Server!
On Rober Ebert
When I was a kid, I wanted to be Bud Herseth
Louis CK is full of crap.
A night with the Philharmonic

Killing the darlings: How I edit
On building my library
First thoughts on dog ownership
We survived "Snowvember

Ranking the James Bond songs
No, John Williams did not rip off Dvorak
On the passing of Leonard Nimoy
Meet Hank, my internal editor
On waffles
Keeping ahead of the Smiths: Thoughts on the Minimum Wage
I explain the plot of Octopussy

On Richard Thompson and Cul De Sac
Dear 44
Dear 45
A memory from each grandmother
"Let Me Help": Thoughts on "The City on the Edge of Forever" at Fifty
STAR WARS at 40
On "Choosing happiness"
The final victory of JR Ewing: Thoughts on the 45th President

On Books, Hoarding, and Joy
My grandfather's watch
Travels along the Yellow Brick Road
Apollo at 50

Keeping these separate, here are my thoughts on the Star Wars movies that have been released since the Disney takeover:

The Phantom Lucas
Wait, what?
Poe, Rey, Me
That kid ain't right
The praise awakens!

Amazing. Every word of what you just said was wrong.
It's time for the Jedi to end.
We fought to the end.
A flyboy, a mechanic, and a janitor walk into a bar....
A Rose is what Moses supposes his toeses!
People will come, Rey!
Snokin' in the Boys' Room
Are you the fellow who designed St. Paul's?
Attack of the Screw-ups
Happy beeps, buddy! Happy beeps!

The following are from my official site, ForgottenStars.net:

In all honesty, I don't use my Official Site as strongly as I should, because I've never really figured out a focus for it. That's something I hope to do in 2020.

I have also been writing for the last few years for The Geekiverse. Here is a selection of my output:

An introduction, and five summer movies
Shhh! You'll spoil it! (Thoughts on spoilers)
THE PHANTOM MENACE at twenty
Farewell, MAD Magazine
Apollo at 50
Oh, snap: A closer look at Thanos's and Hulk's fingersnaps
The REAL ranking of the STAR WARS movies

Email ThisBlogThis!Share to TwitterShare to FacebookShare to Pinterest
Labels: Events of the Day, Meta-blog