As these go, not bad! The toughest one is "eat healthier," which is a back-end kind of thing: I have no problem finding newer healthier foods to like. It's staying away from the less-than-healthy ones that tends to trip me up! This is something I need to work on big-time.

As for the rest, it was a decent year. I wrote a fair amount (though a lot of my writing time this year was spent on editing existing manuscripts, so drafting was on the backseat for a chunk of the year). Reading was a constant, and I really have made effort to listen to more music!

As the set of "people who are close to me" continues to age, I expect this answer to remain fairly constant: no one close, though some friendly coworkers and online acquaintances had babies, so yay!

Two brothers whom I count among my best friends lost their mother this year in a frighteningly short battle with cancer--in fact, it was so short that it wasn't even much of a battle. She didn't even get to suit up to fight the damned thing. That was terrible. She was a terrific woman and her passing has left a big gap in the lives of a lot of people.

Real ones? I never left the US. False ones? Plenty! I spent a lot of time in my own fictional realms of Emmenmore and Lazony, and hopefully you'll get to read about them in 2021!

Well, I have to wait until November for this, but I really hope to have a President-Elect.

I continued to develop relationships online and off, especially with people at The Geekiverse, where I continue to write articles and attend events. I had two signing events, one being at Nickel City Con, the area's biggest pop-culture convention. What fun that was! 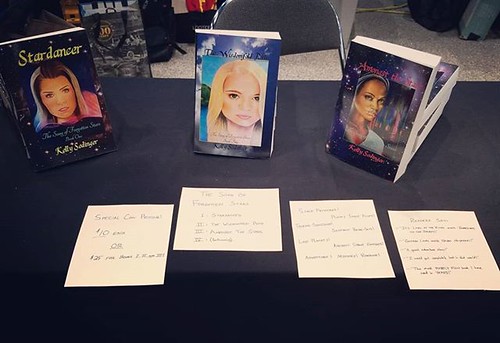 I can talk about usual stuff like how I kept eating way too much sugar, but I'll go with something very specific because it just keeps sticking in my brain. Back in March I was asked to work a shift at a different location of The Company, because that location's person in my position was on vacation and they really needed some stuff done. One of the jobs was caulking the outer edges around a wall-mounted urinal, and...I completely screwed up the job. I didn't test the caulk I used first (it was a brand I hadn't used before), so I wasn't prepared for the ghastly ease with which it exploded from the tube when I applied pressure to the gun handle. I did what I could to minimize it, but what I should have done was just putty-knife it away and redo it. Unfortunately by this time it was the lunch hour and I was in the way of customers, so I just cleaned it up as best I could and left it. At the end of the day I left a note of apology for my total bungling of the job for my counterpart. I remain embarrassed about it now, nine months later. It goes to show that sometimes it's not the complicated jobs that screw you up: it's the simple ones that you should be able to do in your sleep.

On a less serious note, given my personal branding I am likely the only person on Earth for whom this counts as a "major failure," but...2019 was the first calendar year since 2010 where at no point did I receive a pie in the face.

I know. I'm as confused as you are. 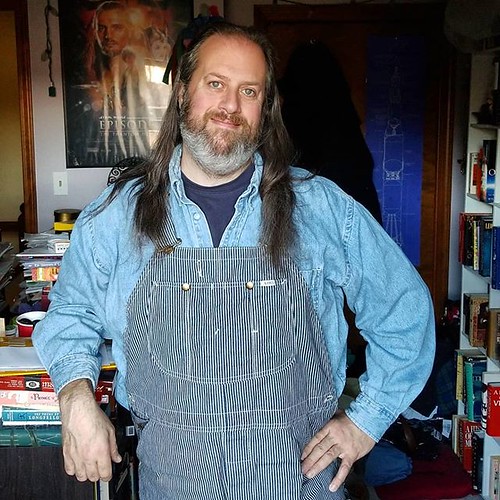 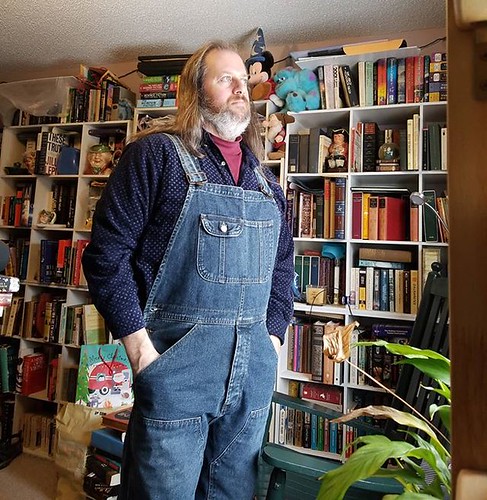 It was a rough year for public behavior, wasn't it? In specific I'd say Greta Thunberg, the teenage activist from Sweden who has been working hard to focus humanity's attention on the increasingly disastrous climate change problem.

And thanks to the Democrats in the House of Representatives for impeaching the worst President in American history.

Republicans don't really have it in them anymore to appall or depress me. Their ongoing fealty to Donald Trump and their dedication to pursuing the most odious set of policies ever continues to disgust, though.

Seeing My Fair Lady on the big screen! And Stranger Things 3.

A bit happier. The Wife changed careers in late 2018, leaving a lucrative but deeply draining restaurant management career for banking work. The difference in her mental outlook, and therefore mine, is amazing.

About the same, give or take a pound or two. I need to make a concerted effort in this matter.

Jury's out on that. (Same as last year.)

As always, reading, writing, and walking. (Same as last year.)

Eating crap that doesn't make me feel good. I need to adopt a more selective approach to the things I eat for flavor alone, and I've actually been making headway in that regard.

Of course! Love actually is all around.

Ha! I'm not telling you that!

We loved Stranger Things 3 and Dead To Me on Netflix, and we're enjoying the new ABC detective series Stumptown, which is based on a series of graphic novels that I liked a great deal.

Me level of disgust for the Republican Party continues to bury my Anger needle in the red, so.

Here are the books I rated with five stars on Goodreads in 2019:

(That last one I only gave four stars, but it should have been five. It's an amazing history of the United States, written just last year by an author I've only recently discovered.)

A new former President. And Les Miz tickets. (It played in Buffalo in mid-December, which is the last time I can afford theater tickets.)

Avengers: Endgame and Knives Out. (My long-form review of Star Wars: The Rise of Skywalker will have to wait for 2020, but...I am more and more of the opinion that it was not good.)

Same as every year: I likely worked, and then a few days later went on vacation for our yearly trip to Ithaca.

How would you describe your personal fashion concept in 2019?

Heh! It's just not changing, folks.

As an American, right now I'm just holding my breath before the final plunge.

The afore-mentioned Greta Thunberg. Generations to come are not going to look with kindness upon my generation or the one before, and we've got it coming.

Of all the ones out there, climate change continues to be the big one, the changing of the game that we're completely ignoring.

Tell us a valuable life lesson you learned in 2019:

Read a lot, write a lot. Listen to music. Go for walks and look at sunsets. Take all the pictures you want. Learn new things and try new stuff. If you have a dog, take him for walks. Buy books for your daughter, even when she complains that she likes to pick her own books (let her do that, too). Nothing fits your hand so well as your lover’s hand. Eating out is fine, but learn to cook things, too. Have a place to go where they know you and what you order. Don’t be afraid to revisit your childhood passions now and again; you weren’t always wrong back then. Overalls are awesome, it’s OK to wear double denim, and a pie in the face is a wonderful thing! 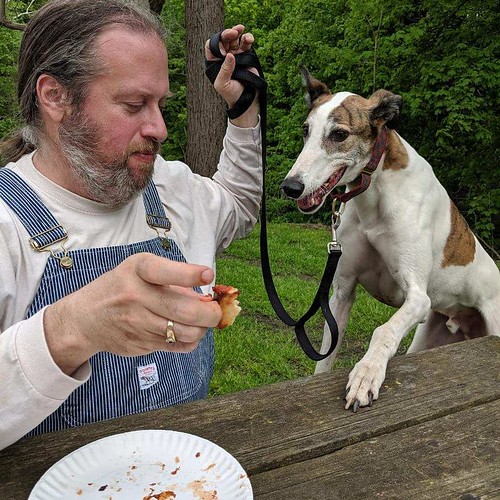 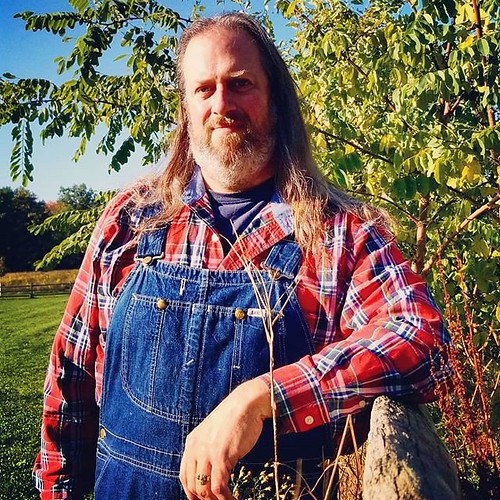 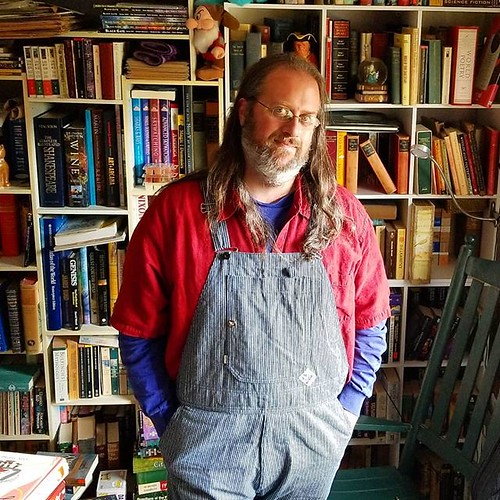 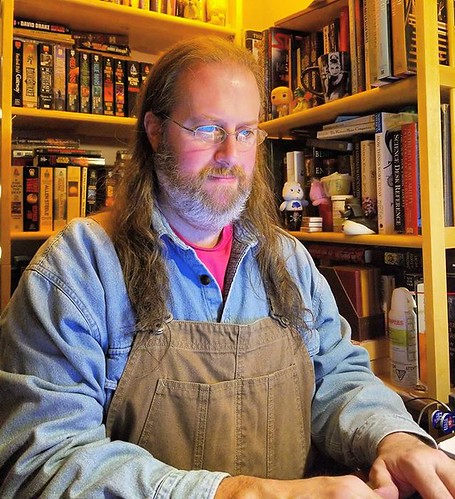 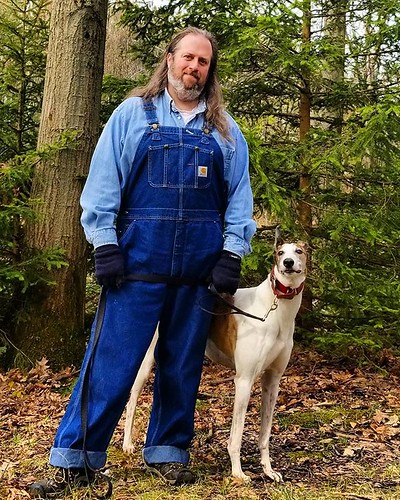 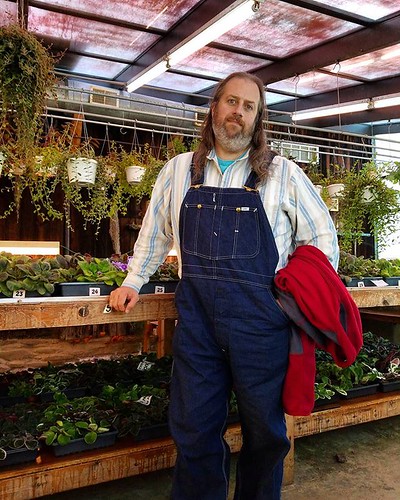 That last one is my favorite self-photo of this past year. I just really like the way that photo turned out. I took this one while off by myself at this place on the shores of Canandaigua Lake that breeds African violets, while The Wife was perusing the plants.

Sometimes this is easy, sometimes less so. But with the decade ending along with the year, I'll go with Freddie Mercury and friends, in their end credits song to Flash Gordon, "The Hero":

All you gotta do is save the world!

Yes you're a hero!

Email ThisBlogThis!Share to TwitterShare to FacebookShare to Pinterest
Labels: Daily Life Stuff, Events of the Day