Travels Along the Yellow Brick Road 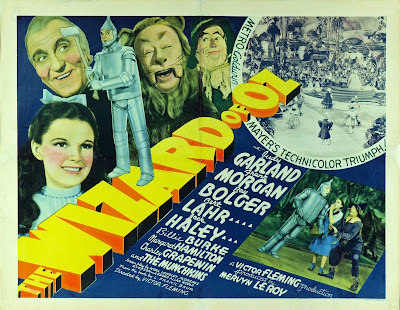 I suppose I am hardly unique among Americans in that The Wizard of Oz has been a part of my life almost as long as I can remember. I grew up during that hazy prehistory when the only way to watch Wizard was to wait an entire year for one of CBS’s annual airings of the movie—usually in springtime, as I recall. When you’re a kid that wait is so long that you’re barely aware of it. Suddenly one day it’s spring again, and one day you’re in front of the teevee to watch The Wizard of Oz.

I don’t remember much about those viewings of the movie when I was very young; just a few images here and there. I remember the early moment when Dorothy falls into the pig pen. I remember the Scarecrow pointing in both directions, and the Tin Man’s oil can, and the crown the Lion wore for his big song number, a crown made from a shattered flower pot. I remember the Wicked Witch melting, and Dorothy’s farewells to her friends. I always cried at those, and I’ve had a terrible time with “forever farewells” in stories ever since. The worst, though? I remember one year—maybe this was when we lived in Oregon, when I would have been a preschooler—that I burst into tears when the words “The End” appeared on the screen.

The Land of Oz, as shown in The Wizard of Oz, was my earliest fantasy world, and certainly the first one that I didn’t want to leave when it was time. More of those would come. I’ve always thought of Lloyd Alexander’s Prydain as my proto-fantasy world, but in truth, two came earlier: Middle Earth, via the animated version of The Hobbit, and the kingdom of Oz.

Nowadays, of course, I find that as a writer I too can be “that man behind the curtain.” In the end, after Dorothy’s adventures with her wonderful friends (who, I am sorry to admit, took me adulthood before I realized their strong resemblance to the farmhands of Dorothy’s Kansas home), the character with whom I identify most may well be the Wizard, that kindly and wise man who is still something of a charlatan.

Of course, experiencing The Wizard of Oz as a fleeting, once-a-year thing is long a thing of the past. First there was VHS and then DVD and then Ted Turner bought the rights so the movie showed up on TBS only a little less often than The Beastmaster. Now, you can pretty much watch The Wizard of Oz whenever you want. I don’t much pine for the “old days”, but there was a certain charm back then of going to school the next day knowing that you and all your friends would be equally basking in the post-Oz afterglow. 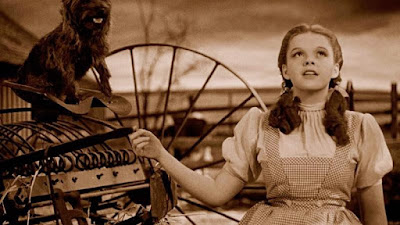 Several weeks ago, The Wife, The Kid, and I attended a screening of Wizard as part of its 80th Anniversary Celebration at one of the Fathom Events. (These are special screenings of many artistic presentations—classic films, live operas, and more—shown digitally at certain movie theaters.) Eighty years of The Wizard of Oz astonishes me on many levels. The movie came out in 1939, the year my father was born. I have a solid chance of seeing Wizard hit 100. The theater was packed on the day we attended, which for some reason we found surprising. We’ve been attending Fathom Event films off and on for a couple years now, and we’ve never seen the theater sold out. There were even families with children in costume, little girls in blue gingham dresses and “ruby slippers”.

This was the second time The Wife and I saw Wizard on the big screen, with the last time coming twenty years ago for the film’s 60th jubilee. Like any great film, the experience of seeing it on a big screen in a darkened theater crowded with people who are sharing the same journey is deeply different from watching it on the finest teevee or computer screen. The crowd laughs, hisses, and tears up at all the right moments. I found myself fearing a little that some of the film’s moments that have become so ingrained in popular culture as to become cliché might be met with laughter, but not so. No one sniggered at the Wicked Witch’s cackling threat: “I’ll get you, my pretty—and your little dog, too!”

I was struck at how funny this movie is, too. When Dorothy, running away from home early on in order to save her poor Toto’s life, encounters a man who is clearly a charlatan, he puts on a display of cold-reading that is dead-on, and the scene is intelligent and full of wit. This goes on throughout the movie, with laughs both famous and laughs that are only remembered when one encounters them, like a forgotten acquaintance for whom we once felt a particular fondness.

Wizard’s opening act is so engrossing that the famous moment when Dorothy enters Oz and steps into a Technicolor world, the enchantment is as spellbinding as ever. I do wonder what that moment must have felt like to the movie’s first audiences, back in 1939. Surely those audiences gasped loudly, because today’s audiences still do, even when they know it’s coming.

From that moment on The Wizard of Oz marches on, building its world quickly and confidently. It weaves its magic so completely that we never really stop for a moment to consider what we’re not being told: What’s so amazing about those Ruby Slippers, anyway? Why does the Wicked Witch want them so badly? What will she do when she gets them? And...do we care about any of that? Of course not. It’s fine. And when Dorothy meets the Scarecrow it’s at a fork in the Yellow Brick Road, so how do they know which way to go? Who cares! None of these things are lapses in the storytelling, just things left unexplained because they don’t need explanation. And so it goes.

(I do, though, wonder just where Scarecrow got the gun he’s holding in one scene. Once you realize the Scarecrow is walking around with a pistol, you can’t unsee it.)

I also rediscovered the delight of the music of The Wizard of Oz. Obviously “Over the Rainbow” is the film’s most iconic song (and how stunning that the producers briefly thought to cut it!), but every song in this movie is distinctive and cleverly written. The Munchkins’ “Follow the Yellow Brick Road” segues perfectly into “We’re Off To See the Wizard”, which becomes a recurring anthem as Dorothy progresses through Oz. And the introduction of the Munchkins themselves contains some incredibly witty wordplay, from the representatives of the Lollipop Guild to the Munchkin Coroner:

As Coroner I must aver,
I’ve thoroughly examined her;
And she’s not only merely dead:
She’s most sincerely dead!


A more cheerfully morbid lyric might exist, but as of this writing I’ve no idea what it might be.

The film’s songs and musical styles shift throughout the film, too. The Munchkins have their childlike sound, contrasted with the good cheer of the denizens of Emerald City as they welcome Dorothy and company to the “Merry Old Land of Oz”. Surprisingly, after the Cowardly Lion’s “If I Were King of the Forest,” the movie stops being a musical: there are no more numbers at that. I wonder why that might be the case. Maybe the producers didn’t feel the need for any, or maybe they felt that any songs past that point might slow down the narrative. I don’t know that any other songs might have worked. Maybe a reprise of “Over the Rainbow” as Dorothy sits captive in the Wicked Witch’s tower, which might be when she seems to really start to learn the film’s central message that “There’s no place like home.” I don’t know if that would have worked, but it is interesting that Dorothy’s initial dream of going “Over the Rainbow” is not bookended in song with her learning that she doesn’t really need to go over the rainbow at all.

This screening was also the first time I’ve seen The Wizard of Oz after we saw the Broadway show Wicked, which tells the story of the Wicked Witch, whom we learn is named Elphaba. The movie is, of course, very much its own thing, and I found that at no point was I envisioning the events of Wizard in light of the events of Wicked. The Wizard of Oz is such a classic as to maintain its own storytelling heft, which stands alone, unshared by such follow-ups as The Wiz, or Wicked, or the 1980s movie The Return to Oz.

Ultimately The Wizard of Oz remains what it always was, what it always has been: a grand fantasy, a touching story, a thrilling adventure, a witty and sophisticated tale, a wonderfully tuneful musical, and ultimately a sublimely well-made film that is a constant touchstone for the youth in all of us. And why shouldn’t it be that? It is, after all, dedicated on screen to the “young in heart.” 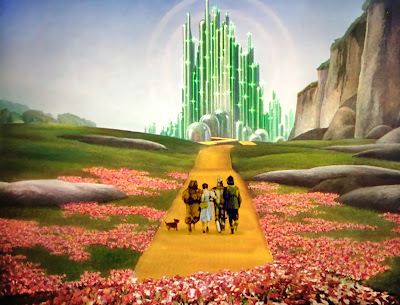 I need to see more Fathom shows - Field of Dreams in June? Shawkshank in Sept?