"Let me help" (Thoughts on "The City on the Edge of Forever", on its 50th anniversary) 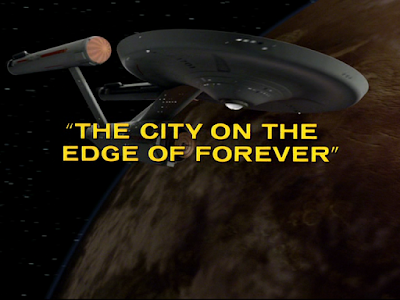 Edith Keeler: And you, um, don't want to talk about it? Why? Oh. Did you... did you do something wrong? Are you afraid of something? Whatever it is, let me help.

Capt. Kirk: "Let me help." A hundred years or so from now, I believe, a famous novelist will write a classic using that theme. He'll recommend those three words even over "I love you."

If you've never seen it...you should. Really. The story doesn't really require a huge amount of knowledge of Trek. The Enterprise is investigating strange "ripples in time" that are emanating from a particular planet, and during one such jolt, Dr. McCoy accidentally injects himself with an enormous overdose of a drug that drives him temporarily insane. He flees to the planet surface, and Kirk follows, with Spock and some others. They find themselves in the ruins of an ancient city, with one functioning artifact remaining: a giant portal which is actually a portal through time itself. McCoy, still mad, jumps through and into history, and suddenly the members of the landing party realize that the Enterprise is gone. McCoy has changed history so that the Federation never happened.

With no choice but to try and put things right, Kirk and Spock follow, and find themselves in 1930s New York City. While trying to figure out what McCoy did and where he is, they enter the employ of a woman named Edith Keeler, a visionary who runs a soup kitchen. Kirk falls in love with her...only to have Spock discover that what McCoy did was prevent Edith Keeler from dying in a car accident. If she survives, she lives to found a peace movement that prevents America's entry into World War II, allowing the Nazis to win and take over the world.


The story unfolds so organically that the episode feels longer, heftier, than its 50-minute or so running time. The episode feels large, and yet all of its key moments play out on an intimate stage, such as when Jim Kirk and Edith are walking along the street at night and Kirk tells Edith some things about the future, things that don't even strike her as strange to be hearing from this man she's just met. And the way she sizes up Kirk and Spock's relationship:

Edith Keeler: [to Kirk] I still have a few questions I'd to ask about you two. Oh, and don't give me that "Questions about little old us?" look. You know as well as I do how out of place you two are around here.

Spock: Interesting. Where would you estimate we belong, Miss Keeler?

Edith Keeler: [to Spock] You? At his side, as if you've always been there and always will. [to Kirk] And you... you belong... in another place. I don't know where or how... I'll figure it out eventually.

Spock: [to Kirk] I'll finish with the furnace.

Edith Keeler: [to Kirk] "Captain." Even when he doesn't say it, he does. 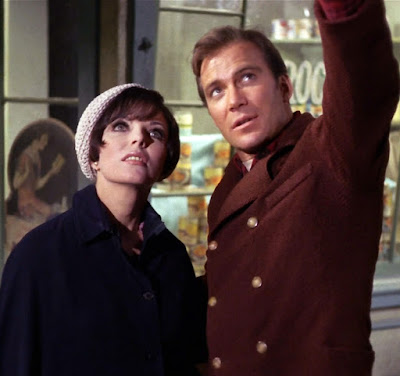 "The City on the Edge of Forever" involves relatively little action. It relies on its character work, showing us that Kirk is falling in love with Edith Keeler before Spock's discovery that she is the key focal point around which history will pivot. William Shatner, Leonard Nimoy, and Joan Collins likewise turn in amazing work in this episode. Collins's Edith Keeler is probably the woman in James T. Kirk's history, the one he could not save even though he desperately wanted to. Her death is the memory that he will carry with him forever. Shatner sells every single minute of this, never once over-emoting, never once going too far. His Kirk doesn't just fall for a pretty woman. Shatner portrays a Kirk who has just discovered, hundreds of years in his past, a kindred spirit. He has found someone whom he can understand and who can understand him. And when he realizes that he may well have to stand by as she dies...Shatner's portrayal of a man torn on both sides of the awfullest of dilemmas is so stark, so aching, that it always moves me nearly to tears.

And then the moment arrives.

The script's other masterstroke is that Spock can't determine when the awful event will occur. There is no "She dies on November 12, 1937." This isn't like Stephen King's (masterful) 11-22-1963, when we know exactly when the events are going to occur. Kirk has no idea it's happening, even as we do. He sees her coming back across the street. He starts out to help her...and then he stops. He knows. The moment is upon him, and it unfolds as quickly as it has to. No slow-motion here, no long-held gazes. It comes so quickly that for us, the viewers, it's almost like--what? Was that it? Oh my God, that was it. Over, that quickly.

But Kirk not only had to let Edith die, his choice -- his only choice -- was more awful than that. Because Dr. McCoy was there too, and he didn't know. They had just found him, seconds before, and now McCoy too is watching Edith Keeler walk into the path of the truck. Kirk can't just stand aside, or stand still, and watch Edith die, because if the script allowed him that much, he'd be able to say later, "I couldn't have saved her. She was too far away."

Kirk's choice is an active one.

McCoy doesn't know this. He doesn't know any of it. He only knows that he could have saved her. His voice fills with rage.

McCoy: You deliberately stopped me, Jim! I could have saved her. Do you know what you just did?


And then Spock, summing it up so logically, so heart-breakingly, in a line that no actor other than Leonard Nimoy could have delivered:

Spock: He knows, Doctor. He knows.


One thing about Star Trek II: The Wrath of Khan that has always bothered me was the idea of the Kobayashi Maru test, the idea that a false scenario could somehow test a cadet's approach to a situation in which there is no possible "victory". In that movie, Kirk openly says "I don't believe in the no-win scenario," and later on, after Spock's death, he says that he has never really faced death. But in "The City on the Edge of Forever", he faces both a no-win scenario, and he faces death. The idea that Kirk can later on claim otherwise has always seemed deeply false to me. Maybe he's blocked the memory of Edith Keeler? Maybe it's so painful that he doesn't admit it in either case? Certainly Kirk never mentioned her again in any filmed episode or movie, which isn't that surprising given the tendency of teevee shows back in that period to not mention previous events much. But the story here, this love between starship captain and soup-kitchen owner three hundred years before his time, is so iconic, and it carries so much weight, that it's almost offensive to me to think that a James T. Kirk can exist who isn't carrying her memory around. Maybe better, then, if in reply to his son David's accusation that he never has faced death, Jim Kirk were to say, "There was one. She died saving us all, too."

But then, you can't have too many mentions, either. Trek would never again visit that City on the Edge of Forever, except in one episode of the animated series, and with good reason. No story involving the Guardian of Forever could possibly stand up to comparison with this one. Trek would not eschew time travel, by any means, but this particular means was left as a singular part of Trek mythology. I wonder if any Next Generation writers were tempted to visit it. I'm glad they didn't. It is interesting, though, that Jean-Luc Picard would get his own kind of iconic time-travel story in "The Inner Light", as would Benjamin Sisko in "The Visitor".

James T. Kirk is an explorer at heart, and an adventurer. But his experiences in the past, via the Guardian of Forever, have a profound effect on him. At episode's end, when he and Spock and McCoy return to the present with everything restored, the Guardian appeals to that part of his soul, offering to guide him and the others through history. What an offer to someone whose life is charged with boldly going! And yet, all Kirk can muster in that moment is a gruff, "Let's get the hell out of here."

"The City on the Edge of Forever" is the kind of story I dream of writing. For a single one-hour episode of a teevee show to hit so many emotional highs and lows? To linger in the memory as it does? I wonder if, as they were shooting it -- maybe at the first table read -- anyone either thought or muttered, "They'll still be talking about this one in fifty years."

Who knows? If my health permits, I'll still be talking about this episode when it hits one hundred. 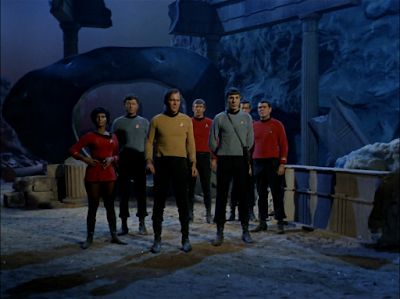