One Memory of Each Grandmother

I never knew my grandfathers. Both had passed away long before I arrived on the scene. My grandmothers, though? Both lived into my teens, when--quite sadly--both passed away within about six months of each other. Grammy, my father's mother, went first in the fall of 1986. Gramma, my mother's mother, passed later that winter (or maybe it was early spring). Here's a memory I have from each.


Grammy and the Manhattans 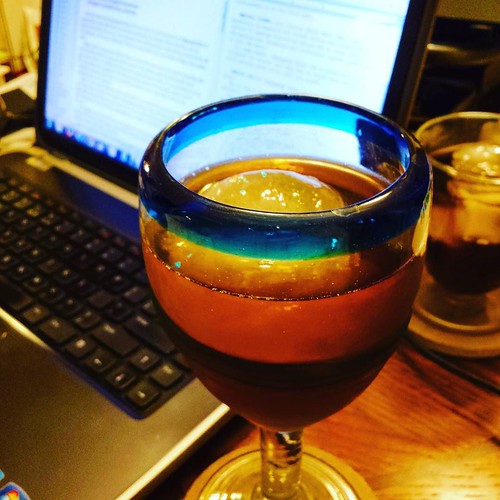 Over the last seven or eight years or so, my tastes in adult beverages have shifted from beer to wine and cocktails. My favorite cocktails tend to be rum-based, with my favorites being the Mojito and the Dark-and-Stormy, but over the last few months I've discovered Grammy's favorite cocktail, the classic Manhattan.

Grammy simply adored Manhattans. I don't know of a time when I wasn't aware that there was a drink called a Manhattan and that it was Grammy's favorite drink. One time, toward the end of her life, she was visiting us for a week or two. By this point she was starting to experience some problems with her mobility, but when my father invited her "down the street" (his longtime euphemism for "going to the bar") for a Manhattan, well, suddenly she was a bit more spry. My mother later told me that when I was just a toddler and my family was moving from Pittsburgh to Portland, OR, Grammy gave her a bottle of Manhattans to see her through the trip.

So I decided a while back to try making a Manhattan, mainly out of curiosity. I have several books on mixology, so I grabbed a recipe and picked up the ingredients and had a go. The base recipe I use is as follows:

Stir together in a mixing cup with 1 ice cube:

Stir for at least twenty revolutions of the bar spoon (yes, I count them), and then pour over ice in a rocks glass. Garnish with at least two Maraschino cherries.

There are recipes out there that call for both sweet and dry Vermouth, but I haven't tried that mainly because I don't have room in the fridge for two open bottles of Vermouth. I have also used Red Stag whiskey, which has a black cherry flavor. One thing I don't do consistently is include the Maraschino cherries, and I have received stern lectures on this from both my mother and my sister. I like the cherries, but too often our jar of them migrates to the rear of the fridge, and who wants to dig through cups of yogurt and jars of pickles and partial cans of tomato paste and who knows what else every time they want a drink? Not me...but for purism's sake I should probably get with the program.

Besides, the cherries also pertain to Grammy specifically, because she could put the stem in her mouth and tie it in a knot with her tongue. That's some serious stuff, folks. Everyone's grandmother should have at least one eye-popping useless skill, right?


Gramma's Blue Jug
I expect that everyone's grandmother had a particular item in their home, just some ordinary thing that was just an unremarked and unremarkable part of their daily lives, that stays in our memory. We remember this item not for any specific event that we recall in which it played a part; it's just that this particular item, whatever it might be, serves as a kind of totem for a particular time and place. If we're very lucky, we inherit that item. If we're kind of lucky, we at least see one just like it once in a while at an antique store.

For Gramma, it was a blue ceramic jug.

At her house it always contained ice water. She'd fill it from the tap and put it in the fridge, and I don't remember any ice water in my life ever being so cold and refreshing as that from Gramma's blue ceramic jug. Now, ceramic is a good material for such things because it takes its sweet time in transferring heat. Cold ceramic stays cold (or hot) for a long time. Water from that jug couldn't have physically been colder than anything else in that fridge, but for some reason it felt like it was. This jug was blue, and it was circular in profile with the handle a part of the circle as opposed to being its own protrusion. The cork-inlay stopper matched as well.

As far as I know, Gramma had that jug in her fridge up 'til the day she died. I have no idea what happened to the jug after that. Gramma lived with my Uncle Bob, who wasn't...well, let's just say that Uncle Bob was not a terribly easy man to like and leave it at that. Inheriting the jug wasn't a possibility, and that was that.

Some years later, my sister managed to find one in an antique store, and she bought it for my mother, who was ecstatic to have the jug. For her, it didn't even matter that it wasn't the very jug from Gramma's kitchen. The color was the same, the jug was the same, and for her it was every bit as good as having the real thing. I'm not so avid an antiquer as my sister, but I do go to antique stores a few times a year and I've always kept an eye out for the same jug. I've never yet seen one "in the wild", but I would have bought one if I'd seen it and the price was right. If it was too much, well--I'd look at it in the case and remember drinking out of Gramma's and move on.

Flash forward to just last week, when I went to an antique mall near Rochester, NY with my sister. She found one of the jugs, in the right shade of blue. She bought it and gave it to me. It turns out that she's seen several of them over the years and now she owns two of her own back home, where she lives in Colorado. She was even planning to give one of those to me, but when she saw one right then and there, she figured it would save her some future postage (as well as worry about shipping an antique ceramic jug). How did I not see it, since we were at the same mall? Well, the mall is huge, so when we entered we each went a different direction. Had we reversed course, I might have seen it first and snapped it up.

Anyway, I agree with my mother: having a jug that's exactly the same is pretty much every bit as good as having Gramma's original jug. Right now it's on a shelf in my study. Will I use it as a jug in the fridge, filled with ice water for a hot summer day? I don't know yet. I sure like looking at it, though. 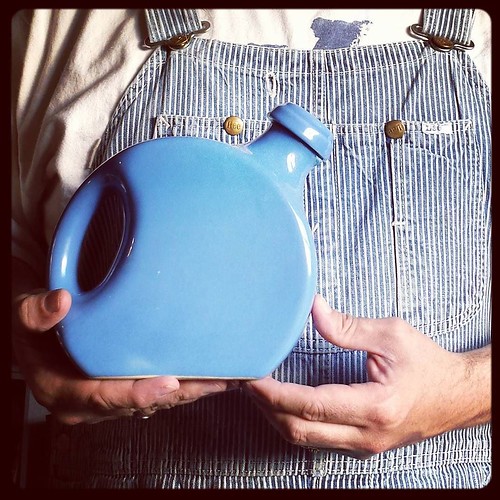 I could, I suppose, mix up a big batch of Manhattans and keep them in the jug in the fridge. That would be a poetic tribute to two wonderful grandmothers....

You put the cherries in the fridge door; they don't take up that much space.