Memories of a Map

When I was a kid we had a map on the wall of the United States. I haven't thought of that map in years, until...well, I'll get to that.

The Wife and I just got back from a one-night trip to Rochester, where one of the things we did was shop at a very large antique mall. One reason I love antiquing, in addition to the fact that you can really get some unique items, is that each thing there has a memory of some kind attached to it. Not necessarily mine, but in this age of disposable stuff hanging from hooks in clamshell plastic boxes in stores, to look at things that belonged to someone once is pretty special. And if I can find an item that matches something I used to own, well, that's definitely special. Many times when I'm antiquing I'll see something--a particular set of cookie cutters, for example, or maybe a movie tie-in drinking glass that Burger King once sold, a glass that we actually had. When I see an antique item for sale that we used to own, it transports me instantly. It doesn't matter in the least bit if the item in question is one that I haven't thought about in several decades.

I had that same experience last night while scrolling through Twitter. One person re-tweeted (for those not on Twitter, that's when you re-post something someone else said, to call it to the attention of people who are following your Twitter feed) a tweet from a person who apparently regularly visits estate sales. This person said the following:

I go estate sale shopping regularly and whenever I find an unfinished embroidery project I buy it and finish it bc there’s no way that soul is resting with an unfinished project left behind. One day I found this stunner for $5.


She went on to tell a story about a series of embroidered quilt squares that she found, and her desire to buy all those squares and finish that quilt. That's a very lovely thought, but what stopped me in my tracks was the photo that accompanied the tweet quoted above. She refers to "this stunner", and the stunner was this embroidered map of the United States: 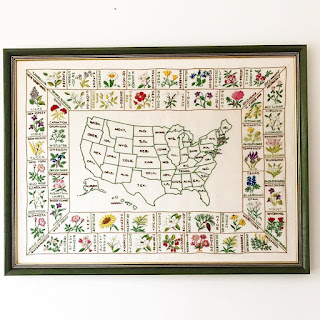 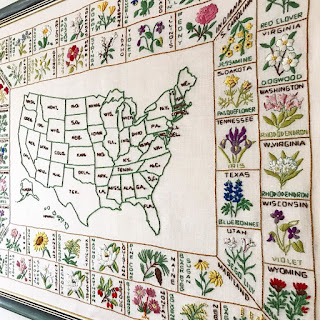 That is what stopped me cold.

My grandmother, you see, embroidered that very map for my family. It hung on our wall for years, but eventually...I honestly don't know. I suppose it went the route of many such things as the years passed and as we moved from house to house to house before finally settling. I couldn't even tell you reliably which house was the last one we lived in when I remember seeing this map on the wall, but...it was there, for a long time.

And I have never once thought about that old embroidered US map at all, not one single time, in all the years from whenever the last time I looked at it as a kid was to this very day. When it just showed up, quite entirely randomly, in my Twitter feed.

You never know what memories are lying around, buried deep enough to not be recalled but not so deep that a single image seen while lazily scrolling some corner of the Internet can't jolt it back to the present, as if that memory had never been mislaid in the first place.

The person who posted about that embroidered map is Shannon Downey of Badass Cross Stitch. You can read the account of her finding the map on her twitter feed, here. Just keep scrolling down.