A Century since the Conflagration 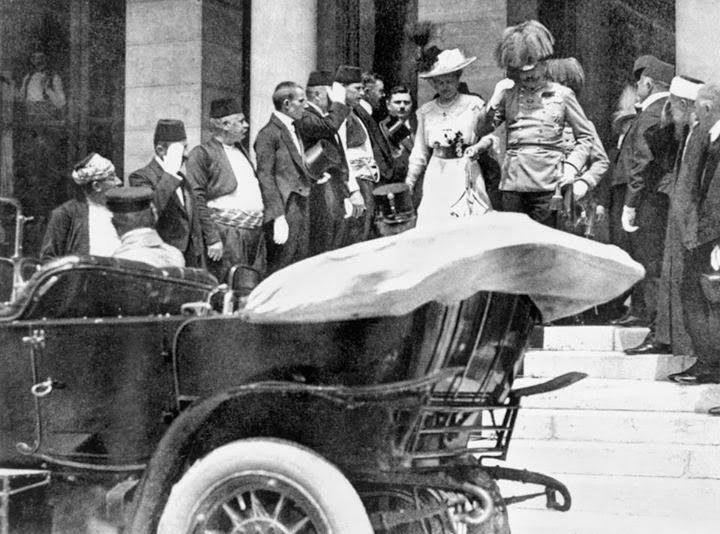 How the assassination of one particular member of just one of Europe's many royal families ended up causing that entire continent to dissolve into a four-year war that killed millions and did nothing more than set the stage for the even worse war to come less than thirty years later is one of the scariest of all historical tales, in my opinion. Reading about the assassination itself, the sequence of events that morning, is maddening, especially when you learn that the only reason Gavrilo Princip found himself standing close enough to Franz Ferdinand to shoot him at point-blank range was that the Archduke's driver hadn't got the message to drive the alternate route that morning. Almost as maddening is the way the rest of the royalty turned the Archduke's and his wife's funerals into an occasion for massaging old angers and familial dislikes...but when you're dealing with royalty, familial angers and old grudges get magnified to national scales, which is how wars start. There's just something so creepily medieval about the way World War I started.

From Barbara Tuchman's book The Guns of August:

"Some damned foolish thing in the Balkans," Bismarck had predicted, would ignite the next war. The assassination of the Austrian heir apparent, Archduke Franz Ferdinand, by Serbian nationalists on June 28, 1914, satisfied his condition. Austria-Hungary, with the bellicose frivolity of senile empires, determined to use the occasion to absorb Serbia as she had absorbed Bosnia and Herzegovina in 1909. Russia on that occasion, weakened by the war with Japan, had been forced to acquiesce by a German ultimatum followed by the Kaiser's appearance in "shining armor", as he put it, at the side of his ally, Austria. To avenge that humiliation and for the sake of her prestige as the major Slav power, Russia was now prepared to put on the shining armor herself. On July 5 Germany assured Austria that she could count on Germany's "faithful support" if whatever punitive action she took against Serbia brought her into conflict with Russia. This was the signal that let loose the irresistible onrush of events. On July 23 Austria delivered an ultimatum to Serbia, on July 26 rejected the Serbian reply (although the Kaiser, now nervous, admitted that it "dissipates every reason for war"), on July 28 declared war on Serbia, on July 29 bombarded Belgrade. On that day Russia mobilized along her Austrian frontier and on July 30 both Austria and Russia ordered general mobilization. On July 31 Germany issued an ultimatum to Russia to demobilize within twelve hours and "make us a distinct declaration to that effect."

War pressed against every frontier. Suddenly dismayed, governments struggled and twisted to fend it off. It was no use. Agents at frontiers were reporting every cavalry patrol as a deployment to beat the mobilization gun. General staffs, goaded by their relentless timetables, were pounding the table for the signal to move lest their opponents gain an hour's head start. Appalled upon the brink, the chiefs of state who would be ultimately responsible for their country's fate attempted to back away but the pull of military schedules dragged them forward.

One of the scariest aspects of war, to me, is how it so often just seems to happen. War is this emergent thing, egged on by people in power who seem to genuinely enjoy a state of war. War is certainly compelling, and tempting for people like me who like to craft epic fiction; you don't get more epic than war. But it's still horrific to read accounts of how World War I started and see the degree to which people seemed to suddenly realize, "Oh my God, we're actually gonna do this! Abort! Abort!" only to be dragged, inexorably, into the meat grinder because other parts of the human psyche took over: the ones that hold grudges, the ones that massage anger and care for it and let it grow like some awful, malignant flower.

World War I didn't have to happen, and yet, it did, because...it just had to. Why? I return, again and again, to a line of dialogue in a play I saw in college, called A Walk in the Woods. The play, by Lee Blessing, shows to arms negotiators, one Russian and one American, taking a break during the unending arms talks during the Cold War to go for walks together, during which they discuss the nature of the Sisyphean task they have been assigned. The Russian keeps returning to his view, over and over, that their job is doomed to failure because humans just plain like war. This is brought home in a line that's stuck with me ever since I saw the play: "If mankind truly hated war, there would be millions of US, and only two soldiers.

Wars happen because people want them to. That we seem to want it as frequently as we do is one of the worst things about our species.

scrawled here by Kelly Sedinger at 10:59 AM

Email ThisBlogThis!Share to TwitterShare to FacebookShare to Pinterest
Labels: Events of the Day, From the Books