:: Ever wonder how the events of Pulp Fiction unfold in real time, as opposed to the film's nonlinear depiction of the story? Wonder no more...here's a timeline! 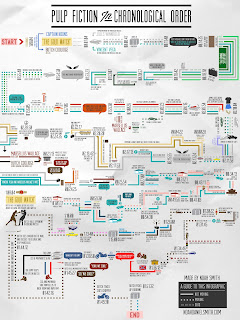 :: PopSpots is a site that figures out the exact locations that great events in popular culture took place, such as the location depicted in Edvard Munch's The Scream. The site is NYC-centric, but still fascinating.

:: PIXAR's rules of storytelling. A lot of good food for thought here, for those interested in the telling of tales. I will admit that i don't agree with item #7, which indicates that you need to figure out your ending first. I like the endings to arise as I go, and I rarely start a story with an ending in mind; when I do have an ending in mind, it's only the very basic idea of what happens at the end, as opposed to any detailed stuff. I prefer to let the characters end the story.

But then, I'm a guy with a bunch of unpublished manuscripts and rejection notes. They're a movie studio with a gazillion dollars and the good will of the entire planet. Hmmmmm...nah, I'm gonna be pigheaded and keep doing it my way! Take that, PIXAR!