Well, May wasn't a spectacular month for writing, in terms of actually generating word count. After finishing the first draft of Princesses In SPACE! (not the actual title) in April, I moved on to a historical fantasy notion that's been knocking about my head for a while. The book -- The Adventures of Lighthouse Boy (not the actual title) -- is intended to be something of a rollicking swashbuckler. I'm looking for a Dumas-type tale, with secret identities and allegiances, old enmities, and swords and pistols. And a lighthouse. That's the plan, anyway.

However, in May, I actually produced word count on less than ten days. That's bad. No way to sugar-coat that; just downright bad. The rule, "Never a day without lines"? Yeah. I bit it hard on that one.

Not that it was an entire waste. I spent much of the first half of the month doing stuff like this: 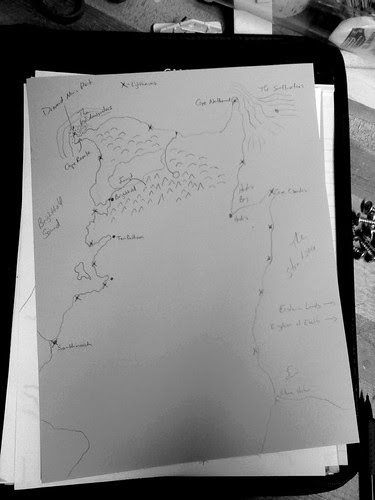 That's the (unfinished) map of my fantasy world in which all this rollicking swashbucklery is supposed to take place. I went through, I think, four drafts of this map before I got it somewhat 'right'; I had to move towns around and redraw coastlines and add geographic features and whatnot. This is part of the job that I don't much care for; my approach tends to be to make up details when I need a detail to be made up, and then add it to the canon afterwards. But this approach wasn't entirely working; I had to at least get some kind of detail going from which to work. So I got that done.

The historical fantasy sounds intriguing. Don`t beat yourself up. Sometimes things just have to percolate.

If you feel like you NEED to be writing (and I know how that feels) and the Historical fantasy is not doing it, than just start something... anything. It may go somewhere, it may be complete dren, but it keeps your writing muscles from going atrophy. I do that sometimes with writing and a LOT with artwork. I produce so much stuff that never gets finished and sometimes it does get frustrating, but then again, if you`re running on a treadmill is it logical to get angry because you`re not getting anywhere? The whole point is to run. Or, in this case, write.