Well, it didn't take long for me to miss a day on this feature, did it? Oops! Thursday was largely taken up by a reinstallation of Windows on the Main Library Computer here at Casa Jaquandor, and Friday was one of those up-at-oh-dark-thirty early-starts-at-work days, followed by a longer than usual nap and generally letting my brain just slosh around in my brain pan for the rest of the night. Not great for blogging. Anyway, this is one of my favorite movies: 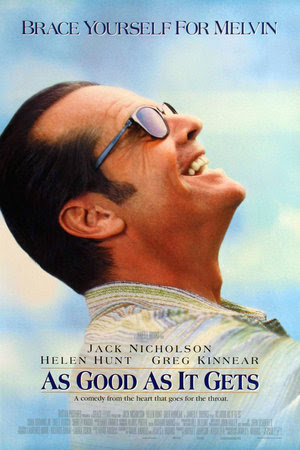 I remember when this came out, the advertising was all about Jack Nicholson's Melvin Udall, who was billed as Archie Bunker with the offensiveness dialed up to eleven, and the film itself billed as a typical "grumpy mean guy learns to love" tale or something of that nature. And yes, it is that, but the movie is a lot more intelligent and insightful about it than that basic plot description makes it sound. It's not just about Melvin and his goofy infatuation with his server (Carol Connelly, played by Helen Hunt) at the restaurant on which he has chosen to inflict his aggressive OCD tendencies, and very early on the film affords us glimpses into Melvin that suggest that there's a lot more than just jerkiness going on under his skin -- such as the look on his face when he slips up and says something to Carol that's way over the line, and he realizes it's way over the line before she tells him point-blank how over the line it was.

Anyway, As Good As It Gets is chock-full of quotable dialog, some of which has become fairly well-known over the years. I'm sure the movie will show up again on this feature, but for now, here's a wonderful scene that gets overlooked. What's happening here is that Melvin has been strong-armed into taking his gay artist neighbor, Simon, to Baltimore so Simon can beg his estranged parents for money. Sensing an opportunity, Melvin then convinces Carol to go along, which she does, because she's desperate for a chance to see something other than the restaurant where she works, the apartment where she lives, and the hospital where she takes her sickly son. The problem, for Melvin, is that Carol and Simon quickly form a friendly connection that Melvin sees as some kind of threatening: not a romantic rivalry, per se, but a competition for time with Carol that he feels is rightly his. And Melvin can't help himself but inject some of his own insight, which the film treats brilliantly as both annoying and partly true.

I think that's a big reason why this movie is so good: Melvin can be annoying and offensive and downright full of shit, but there are times when it's clear that he's also right, at least in part. This is one of them.


That metaphor cracks me up: "Good times, noodle salad". I just love the idea of a mind wired so that a primary image of someone living a life of relative happiness involves noodle salad.

scrawled here by Kelly Sedinger at 10:39 AM

I just never warmed up to this movie, mostly because it felt like it was Jack doing Jack.

I absolutely enjoyed this movie. The OCD's by Jack's character were worthy of note. I also like his interaction with the dog, very cool.

I must have seen this movie a half-dozen times.

Con-Science? That can't be right. lol