From the Books: "Coming of Age in the Milky Way" 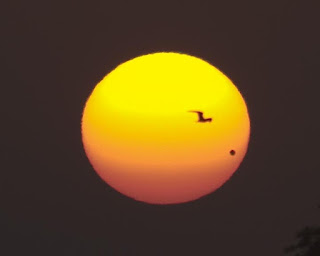 Last night saw a rare, and spectacular, astronomical event: the transit of Venus across the Sun. There were many amazing pictures from this event, and Phil Plait provided some terrific coverage. The event reminded me, specifically, of a passage from a favorite book of mine, and one which I've been planning to dig out for a re-read soon: Coming of Age in the Milky Way by Timothy Ferris.

This book constitutes a one-volume history of the human species's discovery of its own roots in, and relation to, the Universe. In that respect, the book covers quite a bit of the same ground as Carl Sagan's Cosmos, although Ferris's focus is more on a narrative approach than Sagan's more free-form exploration of the Cosmos. Still, Coming of Age in the Milky Way contains some of the finest science writing I've read, and I strongly recommend it.

In the following selection, Ferris relates the mobilization of the scientific world in the 1700s to use that era's coming transit of Venus as a means of measuring the distances between the planets, further establishing the size of what was then thought to be the entire Universe. The transits had been predicted by Edmund Halley nearly a century before, and he had admonished his scientific descendants to take advantage of the opportunity, because by recording the timing of the transits as they unfolded from different parts of the world, a triangulation could be employed to survey the size of our sky.

What's most amazing to me about this is the sheer hardship endured in the name of scientific discovery, hardship that we tend to overlook in the onward march of discovery today, when the transits can be observed and recorded by spacecraft orbiting our world and beaming their data back to us so that I, sitting at my desk, can look at the images on my laptop. I can see the transit of Venus without getting up from my desk, except to get a bottle of water. These guys? Read on to see what they had to put up with to see a Venusian transit....

As for Venus, its transit on December 6-7, 1631, was visible only from the New World and appears to have been viewed by not a single human being, and the transit of November 24, 1639, was observed by two people, the English astronomer and clergyman Jeremiah Horrocks and his friend William Crabtree. Alarmingly for Horrocks, who was a clergyman, the transit occurred on a Sunday, when he was obliged to preach two sermons. He rushed home from church, peered through his telescope at 3:15 pm, and saw Venus, "the object of my most sanguine wishes...just wholly centered on the Sun's disk." Venus, like Mercury, looked smaller than had been predicted – Kepler thought Venus would cover one quarter of the sun, an enormous overestimate – and so to behold its apparent tiny size helped improve human appreciation of interplanetary distances. But Horrocks had no way to measure the apparent diameter of the disk precisely, and, since he was but one observer, he could not have triangulated Venus even if he had possessed an accurate clock. Crabtree, for his part, was so overwhelmed by the sight of an entire world dwarfed by the Sun that he made no coherent notes at all, prompting Horrocks to protest that "we astronomers have a certain...disposition [to be] distractedly delighted with light and trifling circumstances."

But the world had changed by the time the transits of Venus of 1761 and 1769 came due. Astronomy had become an organized science, conducted by professionals, sponsored by scientific societies, and supported by government funds. Now at last, it was felt, science had the resources to sound the dimensions of the solar system. Halley's implorations were remembered, and the transits were scrutinized by scores of observers equipped with micrometers, accurate clocks, and brass telescopes mounted on hardwood tripods at sites as far away as Siberia, South Africa, Mexico, and the South Pacific.

And, to an extent, the transit observers succeeded, though not without suffering some sufficient tribulations to remind them that while the motions of the planets may be sublime the affairs of this world are marbled with chaos. The astronomer Charles Mason and the surveyor Jeremiah Dixon, later of the Mason-Dixon Line, were attacked by a French frigate while making their way to Africa (this was during the Seven Years' War) with a loss of eleven dead and thirty-seven wounded; they reached Cape Town under military escort and observed the 1761 transit, only to find that they differed by many seconds in their estimate of the time when Venus had entered and left the disk of the sun. William Wales timed the transit from Hudson Bay, Canada, after enduring mosquitoes, horseflies, and a winter sufficiently severe that, as he noted with empirical exactitude, a half-pint of brandy left unattended iced over in only five minutes. Jean-Baptiste Chappe d'Auteroche, dispatched by the French academy into the depths of Russia, raced across the frozen Volga and through Siberian forests in horse-drawn sleds, arrived at Tobolsk six days prior to the transit, posted guards to repel angry mobs who blamed him for causing spring floods by interfering with the sun, and managed to observe the transit. He died eight years later in Baja California after timing the 1769 transit, of an epidemic that spared but one member of his party, who dutifully returned his data to Paris. Alexandra-Gui Pingre was rained out for most of the transit in Madagascar, lost his ship to the British and was returned to Lisbon under British guns; a humanist as well as a scientist, he took comfort in the ship's rations of spirits: "Liquor," he wrote, "gives us the necessary strength for determining the distance of...the sun."

Least fortunate of all was Guillaume le Gentil, who sailed from France on March 26, 1760, planning to observe the transit the following year from the east coast of India. Monsoons blew his ship off course, and transit day found him becalmed in the middle of the Indian Ocean, unable to make any useful observations. Determined to redeem the expedition by observing the second transit, Le Gentil booked passage to India, built an observatory atop an obsolete powder magazine in Pondicherry, and waited. The sky remained marvelously clear throughout May, only to cloud over on June 4, the morning of the transit, then clear again as soon as the transit was over.

Worse lay ahead. Stricken with dysentery, Le Gentil remained in India for another nine months, bedridden. He then booked passage home aboard a Spanish warship that was demasted in a hurricane off the Cape of Good Hope and blown off course north of the Azores before finally limping into port at Cadiz. Le Gentil crossed the Pyrenees and at last set foot on French soil, after eleven years, six months, and thirteen days of absence. Upon his return to Paris he learned that he had been declared dead, his estate looted, and its remains divided up among his heirs and creditors. He renounced astronomy, married, and retired to write his memoirs. Cassini, eulogizing Le Gentil, praised his character but allowed that "in his sea voyages he had contracted a little unsociability and brusqueness.


(top image via)
scrawled here by Kelly Sedinger at 10:30 AM

Email ThisBlogThis!Share to TwitterShare to FacebookShare to Pinterest
Labels: From the Books, Science

Now THAT is a tough luck voyage for Le Gentil!