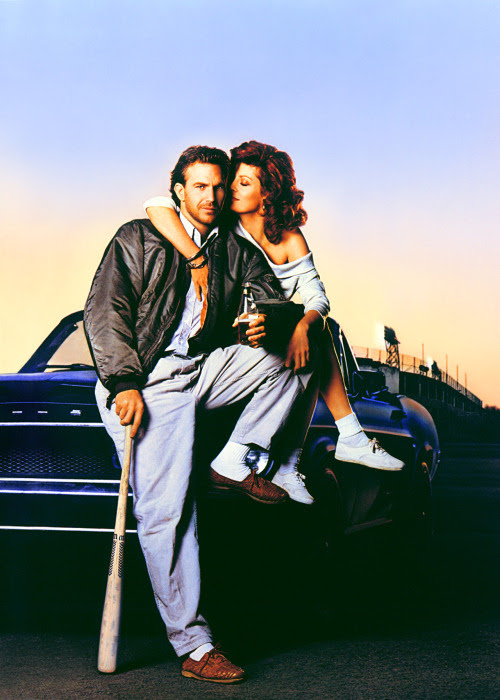 Yup, it's baseball! Specifically, my favorite baseball movie of all time, Bull Durham. I won't wax totally poetic about the movie, having done that before, but...I've got baseball on the brain. Why?

Well, I have a friend at work whose favorite hobby is collecting sports autographs. And while he does buy signed items from memorabilia stores and online, he does most of the legwork himself: he goes to the ballpark and the arena and the stadium and various other places and gets stuff signed himself. He's got a ton of great stories about the hobby and the thrill of the autograph chase, such as a time he and some friends went into a hotel bar, one at a time, to get Jim Plunkett, the onetime Raiders quarterback (and two-time Super Bowl MVP), to sign. The punchline that night was the last guy, who went up to him with a photo of a Raiders quarterback wearing number 16...only to have Plunkett tell him, "That's not me." He'd approached Plunkett with a photo of George Blanda.

Anyway, this weekend my friend has a shot at getting the autograph of the oldest active athlete in his collection: baseball pitcher Jamie Moyer. Moyer is 49 years old, and after starting the season with the Rockies and getting cut, signed a minor-league deal with the Orioles this week. They sent him to AAA Norfolk, who play this weekend at Buffalo against our Bisons. Moyer is scheduled to pitch tomorrow.

Moyer was born with JFK was President, less than a year after my parents were married. He made his Major League debut on June 16, 1986, when Ronald Reagan was President. The top movie at the box office the week of Moyer's debut was Back to School, starring Rodney Dangerfield. And even though Moyer made his MLB debut in 1986, he would not win his first World Series ring until 2008, when he pitched with the Phillies.

What does this have to do with Bull Durham? Well, there's something Crash Davis-esque in Moyer's refusal to retire before he's damned good and ready. As Annie Savoy says in the film after Crash gets cut by the Durham Bulls and travels to the next town down the road to try to catch on with another team in a slightly smaller, slightly crappier ballpark, "You have to respect a ballplayer whose just trying to finish the season."

Anyway, here's a great scene from Bull Durham. Tough to pick one, as the movie has nothing but great scenes.

Sometimes I forget how far beyond the "oh, my" scene this movie goes. Nice choice.

My boys love them some Jamie Moyer, specifically because of his stint with the Phillies.