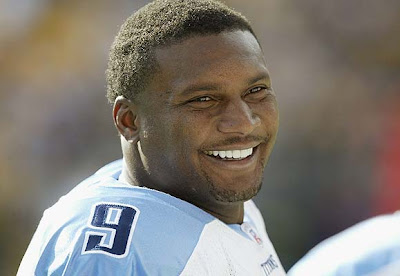 While the act of consummate sporting evil that was Homerun Throwback had me loathing the Tennessee Titans for a while, I never disliked their quarterback, Steve McNair, at all. He was just too classy of a player, with toughness that you don't see all that often anymore. I remember when he was being drafted, hoping somehow that the Bills might swing some kind of big trade to move up in the draft to get him (at the time it was clear that Jim Kelly was down to his last year or two), and frankly, the last twelve years of Bills history would certainly look different had they done something like that. (I don't recall any actual trade talk that year; it was just wishful thinking on my part.)

McNair was found shot to death yesterday. They don't know what happened yet. He had retired from the NFL a year ago, but even so -- this was a fine player, one of the best of the last fifteen years. Damn.
scrawled here by Kelly Sedinger at 8:47 AM

Air McNair was a real quarter back. He did not rely on the option to avoid a sack.

Had the Buffalo Bills been smart enough to draft Chis Carter out of Ohio State they would have won 4 maybe more super bowls.

I hope the Cris Carter part is a joke.

Carter went in the fourth round in the 1987 draft. He was there for the taking He had hands made of velcro and was tough enough to catch and hold on to the ball in traffic.
Had Jim Kelly had a target like this you probably would not had to rely on field goal kickers to win (or lose) your games.

Do you really think a wide receiver would have made a difference in any one of the Bills' Super Bowl losses?

Buffalo lost the first one to the Giants because the game plan had them throw too much; Thurman Thomas averaged almost 7 yards a carry and gained more than 130 yards. The Bills could have run more, gained yardage and killed the clock.

Carter was a very good receiver on decent teams who failed to raise them to higher levels. Nothing to be ashamed of, but he was rarely a game breaker.

Carter was a GREAT receiver. He never had a great quarterback throwing to him. Jim Kelly to Chris Carter with Thurman Thomas would have been unbelievable. Kelly made average receivers look good and Carter made average quarterbacks look good.

The fact that this did not happen is a pure tragedy. The only thing that comes close is the packers passing on Barry Sanders for Tony Mandarich. Sanders with Farve and Sterling Sharpe catching, wow.