"DANCING! Everything else is bullshit!" 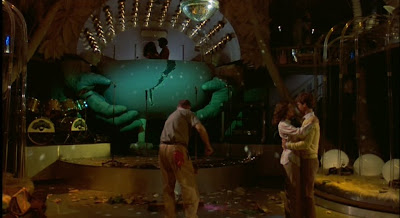 It's always fun to take trips down memory lane and investigate the objects of our nostalgia, isn't it? Once in a great while we'll look into something we deeply loved when we were young and find that it's every bit as good as we remember it; much more frequently we find that the thing we loved is actually complete crap, and a kind of jaded disappointment sets in as we wonder how we could have ever been so naive as to think the item in question was any good at all.

But there's a little-discussed third category, when we strongly suspect that the thing we loved back in the day is crap, and thus, when we find our suspicions confirmed, we're not so much disappointed as rather elated in a strange way. I had one of these experiences last week, when I popped into my computer the DVD of a movie I hadn't seen since I watched it at the tender age of eight in my own living room. The movie? A mostly-forgotten flick called Thank God It's Friday. 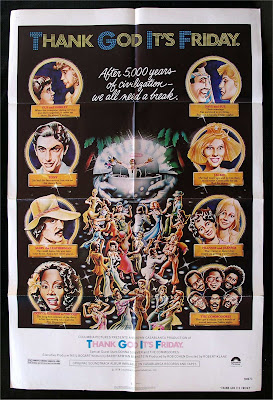 How did I come to see this movie when I was eight? It was on HBO during the year when we actually subscribed to that service, the year we lived in Elkins, WV. I was in second grade. HBO was kind of cool -- a channel with uncut movies! What could have been cooler than that? I vaguely remember being ordered out of the living room when my parents wanted to watch an R-rated movie on HBO, but I could be misremembering events. I don't really remember how many movies I saw on that channel -- the only ones that stand out are Buck Rogers in the 25th Century (I had an obsession about that flick and its later teevee show), The Poseidon Adventure, and Thank God It's Friday.

So, what about this movie? Well, I noted some time ago that Saturday Night Fever has a camp reputation about it, mostly owing to the camp reputation that's accrued around everything from the disco era these days. SNF's reputation, though, is unfair; the movie is cynical, bleak, and brilliant. People who haven't seen SNF mock its dance moves and the disco clothes. The movie they should be mocking is Thank God It's Friday, because this movie really portrays the reality that most people think of when thinking of the disco era: bad clothes, bad dance moves, drunken and drugged-out sexual escapades carried out on smoky dance floors under the eye of a hyperkinetic deejay.

TGIF is one of the campiest movies ever made. I'm reasonably confident in that statement, even though my sample size of movies seen is nowhere big enough to make that statement definitive. Seriously, this is one silly movie. Not one minute of it deserves to be taken seriously. However, I don't hold that against the movie, because I don't think that the movie takes itself seriously for one minute.

What is TGIF about? It's one night, a Friday night (obviously), in the life of a Los Angeles disco. Into this disco wanders a motley cast of characters, whose misadventures on and around the dance floor we follow for the duration of the flick. There is the pair of underage girls who are breaking curfew in hopes of winning the disco's dance contest. There is the Wonder-bread guy whose Wonder-bread wife wants to be more than Wonder-bread, and thus drags her accountant husband to the disco. There's the naughty girl who drags her nice friend to the disco in hopes of finding her a man, and there's the naughty boy who drags his nice friend to the disco in hopes of scoring with the ladies. (No points for guessing who the nice girl ends up with at the end of the movie.) There's the full-of-himself disco owner (played by Jeff Goldblum), who pursues a married woman on a bet. There's the deejay who is under pressure because The Commodores are coming for a live performance that may make or break his career as a radio deejay -- but the guy bringing the equipment for the Commodores is nowhere to be found. And there's the young lady singer who is desperate for her big break and thinks that this disco may be it. Oh, and don't forget The Leatherman, the guy in leather who never stops dancing for one minute and works his catchphrase (which I've appropriated as the title of this post) into every conversation.

Thank God It's Friday is goofy. It's stupid. It's clicheed. Yes, it depicts all of the bad aspects of the disco culture with none of those aspects' bad effects. (Which is, by the way, why SNF is such a great film.) It just isn't a good movie, by any conceivable standard.

Except that...geez, I had fun watching it again. I laughed at it, I laughed with it, I just plain laughed. And the music? Yeah, it's disco -- but really, not everything about disco was awful, and one of my favorite songs ever springs from the movie: "Last Dance" by Donna Summer (for which it won an Oscar, believe it or not).

This post is not a ringing recommendation that anybody watch this movie. But...watch this movie! You may find it so bad you love it.
scrawled here by Kelly Sedinger at 8:25 PM

Never saw TGIF. The movie I most fear seeing is The Night They Raided Minsky's (1968), which I saw in the original release 41 years ago and not since.

They still make some good camp but it is disguised by special effects. War of the Worlds with Tom Cruise comes to mind. I mean the ending is so bad it makes the movie a comedy. All have perished and all has been destroyed, except my family including the inlaws and their brownstone.

We just saw this movie for the first time this past weekend. LOVED IT. I can't believe I've never seen this before. My family lives for campy stuff like this. And by "campiness standards" this is a masterpiece. I was really expecting a sloppy mess of cheese. And yes, it's cheesy, but it was well-formed cheese. Decent pacing, no loose ends, fun, funny, I enjoyed the characters' successes...and failures. And I really didn't expect so much of the music to be SO familiar. I figured it would be mostly obscure disco relics not heard since the seventies, but no. I'd say most of the disco you hear in the movie you'd easily hear today if you put on the right station. And yes, favorite character, definitely the Leatherman! Dude was nuts!

I just saw it on Tubi. Loved it! IMHO, Marv "The Leatherman" stole the show! Loved his dancing and energy! The scene where he danced on the cars was awesome. I think I feel a little in love with him! Before age, adipose, and arthritis set in, I was as enthusiastic about dancing too.