I have a friend at work who watches movies like I read books (or how I like to think I read books). This guy has seen everything, and he can discuss at great length why he likes or dislikes particular films. He's my resident film critic. So when he gave me a strong recommendation for Across the Universe, I heeded his advice. He said it was a good movie. Instead, it blew me away. I don't recall the last movie that affected me the way this one did, given how little I knew of it going in. Maybe The Shawshank Redemption? I loved Across the Universe from beginning to end. Of all the movies I've seen recently, this one seems the most likely to work its way into a high position if I ever revisit my One Hundred Movies list. 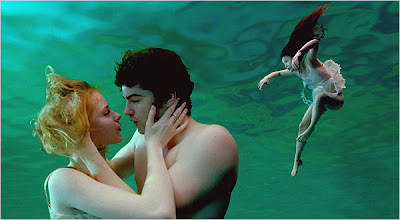 Across the Universe is a musical, pure and simple, in the classic sense of the word: it's a film in which music and dialogue exist side-by-side, in which characters express themselves in song and dance as if it's the most natural thing in the world. (This is to draw the difference between a film like this and, say, Chicago, in which the musical numbers were stylized versions of the actual events of the story; in Chicago, there's no reason to suppose the characters are really singing, and the numbers all take on the feel of dream sequence.) What separates Across the Universe are the songs: every one of them is a Beatles song.

This may sound like a goofy idea on first blush, but it really isn't. The film weaves a story around a whole bunch of the Beatles' most famous songs, and it's a story that works surprisingly well. Yes, some songs are telegraphed early on: after all, as soon as you learn that our hero's name is Jude and his love interest's name is Lucy, well, you already know at least two songs you'll be hearing later on. (Ditto the supporting character named Prudence.) There's precedence for this sort of thing. Recycling of songs used to happen pretty often in the heyday of the movie musical back in the 1940s and 50s, and with just two exceptions ("Make 'Em Laugh" and "Moses Supposes"), all of the songs in Singin' in the Rain are recycled songs. And that's a movie that's generally hailed as the greatest of all musicals. That one works because the songs are all deeply thought out in terms of how they are employed in service to the film's story, and that's certainly true in Across the Universe.

The story isn't terribly complicated. A young man named Jude, who is a worker in the shipyards of Liverpool, decides to travel to America to meet his birth father, who had been an American soldier in Britain during World War II. Jude knows that his father works at Princeton University, so he's expecting a professor, but it turns out that his father is a maintenance worker, "just a workin' stiff like me". Here Jude also meets Max, a student who is more troublemaker than student. Having no one else to hang with, Jude latches on to Max, even going to Max's home for Thanksgiving, which is where he meets Max's younger sister, Lucy (whose high school sweetheart has already been sent to Vietnam, and whose return from that war shortly thereafter is presaged by one of those terribly sad telegrams delivered by hand to his mother). Max decides to drop out of college, and he and Jude go in search of their fortunes to New York City, where they in turn fall in with a singer named Sadie who moves in countercultural circles. The story continues to unfold from there, with Jude and Lucy falling in love with one another as the climate of the 60s becomes more and more toxic. Max is drafted into the Army himself, and the political backdrop of the war brings great tension to Max and Lucy.

The point of a film like this isn't really plot anyway. The point is in the music, and what really struck me is that not one of the songs stood out in that glaringly obvious way. The filmmakers here (led by director Julie Taymor) expend great effort to make it seem as if each song was actually written to appear in this story, and it works wonderfully, if not quite perfectly. I suppose some people who are more intimately familiar with the Beatles and their songs may object, but it seemed to me perfectly natural for "Let It Be" to turn into a lament for a child killed in the Detroit race riots, for "So You Want a Revolution" to back a lover's quarrel, and "Come Together" to serve as a musical welcome for another wandering soul coming to New York.

The film's production design amazed me, from the first act set in the last vestiges of that America that was still trying to hold onto the fifties, to the psychedelic second act, and finally the occasionally bleak and stark final act. In fact, the production values of the movie are very high indeed; a very convincing world is created, in which we constantly focus our attention on a small number of characters but also feel a much larger, and scarier, world encroaching in upon them. There's not a bad performance to be found in the film, either; it's a cast of unknowns, with the only actor I'm familiar with being Evan Rachel Ward (who played Jessie Sammler so brilliantly on Once and Again). There is a brief star turn for Bono as a psychedelic author type; he gives a show-stopping performance of "I Am the Walrus". All of the singing is done very well, by the way. Musicals don't always boast great singing in the traditional sense of the word, but the best musicals feature singing that isn't like performance anyway, but instead convey that the songs are arising out of character and story. That's what happens here.

So yeah, I deeply, deeply, deeply loved Across the Universe. It was, for me, one of those rare things that comes along and fills me with that inspirational awe that comes from watching a truly vibrant piece of creativity. All the possible gripes about the movie -- maybe it's too long, maybe it romanticizes the 60s too readily, maybe its historical accuracy is fudged -- fell away for me completely; such criticisms to me seem to be enormous exercises in missing the point.

If you saw Across the Universe and hated it, fine, but please don't tell me why. If this movie is an illusion, I don't want to know it.

(I posted the Across the Universe version of "Hey Jude" back in August.)
scrawled here by Kelly Sedinger at 9:45 AM

Do you, by any chance, happen to know who Secret Dubai (the blogger: secretdubai.blogspot.com) is?

I'm pretty limited in my movie watching because I don't see anything that is rated R. My old turd on the plate theory, don't ya know. It's nice to hear such a hearty recommendation for something I can see.

I'll let ya know what I think when I get a chance to pick this one up.