:: First, a couple of photo-blogs that aren't exactly "weird" in the sense of "Wow, that's really weird!", but in the sense of, "Hmmm, interesting notion for a blog." First is the Fail Blog, which is a collection of those photos of failure, usually either impending or actually unfolding, helpfully captioned thusly: 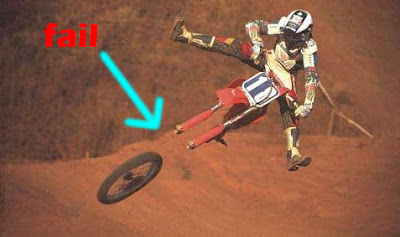 And then there's the The Signage of Negative Space, which features photos of illuminated signs whose forms involve dark shaping over backlighting, like this: 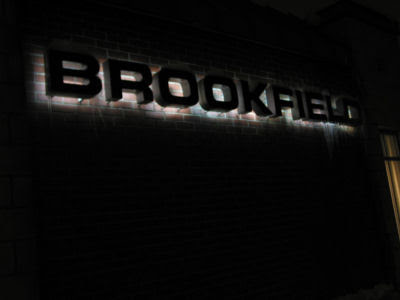 "Negative space" in art is an interesting thing. I remember years ago reading an interview with comics artist and writer John Byrne, when he was working on the post-Crisis on Infinite Earths relaunch of Superman, and he indicated that the only way he'd ever been able to draw the classic Superman insignia was not to draw the actual 'S' but rather the negative spaces involved. Anyhow, moving on....

:: Sticking with signage, Heavy Metal Redneck has a photophoto of fairly creepy bit of signage that is apparently part of a whole series of signs gracing Owasso, Oklahoma. I've decided that I want to move to Owasso, since this is clearly a town where all other problems have been solved.

(But really, this notion that putting up signs helps correct negative behaviors is one of the enduring mistakes that our civilization makes. If this really worked, surely we could win the War on Terror (tm) by simply plastering the entire Middle East with signage reading, "Blowing things up is forbidden and won't work anyway.")

Link via Lynn, who has some kind of relation to Heavy Metal Redneck.

:: Still sticking with signage, and again via Lynn, here's a place that will apparently convert your used clothes into...well, go look. This would seem to violate so many laws, both moral and physical, that you have to wonder how this joint's not a smoking crater by now.

Oh my stars and garters, another one! BWAAA-HAAAA-HAAA-HAHAHAHAHA!!!

Oh heavens! Super Bowl XLII is the gift that keeps on giving!!

(Both links via Kissing Suzy Kolber, which is laced with R-rated content, often directed squarely at the NFL team from New England. If you're offended by such, don't go there. Trust me.)
scrawled here by Kelly Sedinger at 1:23 AM

Thanks very much for the link.