SamuraiFrog did this quiz a day or two ago, and though it doesn't feature tagging, I'm grabbing it anyway, because it's actually interesting and it's a quiz. It's about the Bible.

1. What translation of the Bible do you like best?

I'm always a bit amazed at the sheer number of Bible translations that exist, and the many ways in which the translations selected greatly impact people's personal versions of Christianity. I can't honestly claim to have a "preferred" translation, since I am only familiar with two – the two I own copies of, as luck would have it. Everyone agrees that for sheer poetry and beauty of language, the King James Version can't be beat. My study Bible is the "Today's New International Version". I don't really have an opinion on how it stands up as a translation or as a doctrinal document, and it seems pretty readable to me, so I'm fine with it. I bought this particular version more because of the additional materials it came with (maps, illustrations, commentary, and a nice concordance) than out of any allegiance to the translation.

But come to that, when I was shopping for a study Bible, I was struck by the sheer number of Bibles that are out there, the price that some of them command, and the fact that Bible publishers seem to want Bible-shopping to be difficult because more often than not the bloody book is shrink wrapped. There were several study Bibles that I wanted to thumb through to compare with the one I bought, but as those were shrink-wrapped and this one wasn't, I made my choice accordingly.

Also come to think of it, here's an interesting rant I found the other day on the topic of that incredibly thin paper Bibles are often printed upon. While I can see the point, I've never personally been bothered by bleed-through like this; in fact, I wish someone would print a Complete Works of Shakespeare on paper like this, so I could carry one around with me. None of my current three Complete Shakespeares are the kinds of books one wants to keep in one's bookbag at all times.

As far as what? The OT is always fascinating, of course, and it contains a great deal of stunning poetic language, especially in the Psalms and Ecclesiastes. But it's also got all the blood-soaked material, which is fascinating in itself but not terribly inspiring in terms of morality, and it's got all that incredibly creepy Law stuff in Leviticus. Frankly, the God of the OT is a very hard to swallow deity. The NT has the four Gospels, which of course contain the story of Jesus, which is surely one of the most compelling of all stories, whether you believe or not. Revelation is, of course, a pretty wildly trippy book. I haven't made up my mind on Paul's letters. Paul seems to vacillate wildly between sage wisdom and assertions that sometimes actually irritate me.

3. Favorite Book of the Bible?

The Song of Songs, which doesn't seem to come up all that often in church. I wonder why.

Luke, chapter 2. It's the most poetic of the Bible's versions of the Nativity tale. This chapter is where the KJV stands above every other translation, in my opinion.

There are a lot of verses I've come to love a lot since I've become exposed to the Bible, but for reasons of writerly admiration I have to cite the final sentence of the Gospel According to John (John 21:25):

And there are also many other things which Jesus did, the which, if they should be written every one, I suppose that even the world itself could not contain all the books that should be written. Amen. (KJV)

Jesus did many other things as well. If every one of them were written down, I suppose that even the whole world would not have room for the books that would be written. (TNIV)

Wow, I have no idea. I guess I'll take the easy way and name Thomas, since I doubt stuff. A lot.

7. One thing from the Bible that confuses you?

Just one thing? I don't believe a more confusing book than the Bible exists. When I read the Exodus story a few years ago, this passage from Ex. 4:21 hit me between the eyes:

And the Lord said to Moses, "When you return to Egypt, see that you perform before Pharaoh all the wonders I have given you the power to do. But I will harden his heart so that he will not let the people go. (TNIV)

Emphasis added. That little bit, right there, seems to imply that Pharaoh's not the villain of the Exodus tale he's always made out to be, doesn't it? It almost implies that if the Lord doesn't "harden his heart", the conversation between Moses and Pharaoh would run something thusly:

And Moses said, "Let my people go." And Pharaoh, thinking at length, replied "Go, please. Here's a map, and make sure you pack enough sandwiches for everyone."

OK, that's a bit flip, but the ensuing chapters, in which Moses is able through the Lord's power to visit upon Egypt all those plagues, repeat the stuff about the Lord hardening Pharaoh's heart, so Pharaoh is reduced to being a mere pawn in some game of God's, as opposed to being what he's usually depicted as: a guy who clings to his old Gods to his detriment. Given that this hardening of hearts leads right to God slaying all the firstborn, what does that say about God's nature? And come to that, if God is a loving God when Jesus comes along, why did God change?

While I'm at it, the tale of Sodom and Gomorrah bothers me. Two angels come to live with Lot, and when a bunch of men come to his house and demand that he send the angels outside so they can have carnal relations with them, Lot's response is, in my eyes, pretty staggering. He basically says: "I'm not sending these men outside to have sex with you! Here, rape my two virgin daughters instead!" (This is in Genesis 19.)

Moses, I guess. His story is a pretty amazing epic, all things considered.

(And here's my excuse to use this pic, snagged from John Scalzi from a while back: 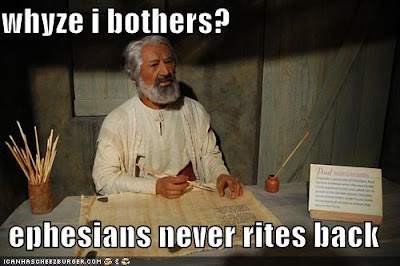 That totally cracked me up, first time I saw it.)

9. A teaching from the Bible that you struggle with or don’t get?

Jesus answered, "I am the way and the truth and the life. No one comes to the Father except through me."

I'd honestly hate to think that good people who aren't Christians in life will be turned away by God for this reason. I have a very hard time with this notion.

10. Coolest name in the Bible?

Is there any doubt? Nebuchadnezzar, of course!

11. What are you wearing right now?

OK, that's not really on the original version of the quiz. It just seems like that question has to come up on every quiz, no matter what the topic.

An interesting consideration of a recent translation of the Psalms by the always astute Eliot Weinberger here:

I think I may have, in a similar context, named John 14:6. Seems like a meme to do before the end of Lent, but I already have two in the queue, plus one I used today (which you'll recognize).