:: How does a coffee scoop just...disappear? (The same way ours did: without fanfare of any kind. One day we're scooping coffee, the next day, we're digging around for a tablespoon to do it with. Then we buy a new coffee scoop, a better coffee scoop. And wouldn't you know it, a few months later what reappears but...our first coffee scoop. So now we have two coffee scoops.)

(Oh by the way, we're still using the same coffee maker we've been using since I got it by joining the Gevalia club back in 1994. Fourteen years, one coffee maker -- and it's still going strong. I'm a firm believer in "Get a gizmo, and then use it until it breaks forever and ever.)

:: We're going to our favorite Indian place and I AM GOING TO HAVE A WHOLE GLASS OF WINE! (This blog belongs to the wife of a guy who had an impressive run on Jeopardy! a couple of months ago. I coulda taken him, of course, but lots of other contestants had trouble.)

:: Does this mean that, in order to discover a crucial piece of information, Gandalf, Tolkien's supreme representative of beneficent wisdom tortured a helpless captive? And if so, does it follow that Tolkien thought that it is sometimes OK for a good and wise person to resort to torture? (A fascinating post from a blog I'd forgotten about after a previous crash scotched my bookmarks.)

:: To the guy who gave his girl a dozen helium-filled mylar balloons: (You'll have to read the rest. I've seen this kind of thing happen.)

:: Who the hell reads two books at the same time? WTF? That's utterly ludicrous. Very nearly heretical, I'd say. One thing at a time, people!! (Wow! I have two or three always going at any one time, although obviously not at the very same time, which is what I suppose Simon's complaining about. When people ask how I keep them straight, I reveal that the secret is to have the books be in wildly divergent genres, and not all fiction, either. Thus, a novel, a graphic novel, and a nonfic book can all maintain a place in my reading queue. Simple!)

:: Yeah, love really did make all the difference. Go figure.

:: I'm not shy about admitting that I had a pretty hard crush on Molly back in her Sixteen Candles/Breakfast Club days. (You know, I never had a crush on Molly Ringwald. But Ally Sheedy, on the other hand.... 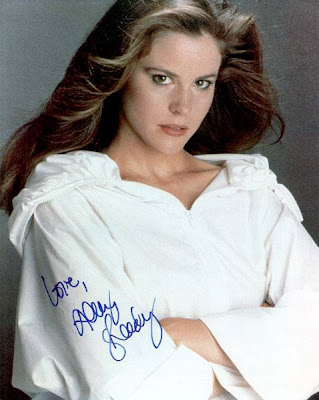 :: I get really annoyed when people get overly nostalgic and talk about how dreadfully brutal and violent my generation is in comparison to "simpler times."

:: It’s a different kind of freedom, one I have never really understood.
scrawled here by Kelly Sedinger at 4:53 PM

Oh, yeah, I had it for Ally Sheedy, too -- not messed-up Breakfast Club Ally, but WarGames Ally... yummy.

I didn't realize she was that much older than Molly Ringwald. I always thought they were about the same age.

That's a beautiful photo of her...

Thanks for the link, Jaquandor. I totally forgot about the whole law that says you'll find what you lost the minute you replace it. Yay! Hope it works in this case.

JEOPARDY! is much easier at home.