Blogiversary! (and Ask Me Anything!)

Actually, I missed it; the official Blogiversary for Byzantium's Shores was on Friday, February 15, but I was too busy that night to post in honor of it, so I'll do it now.

And this gives me a good time to start with the answers to the current round of Ask Me Anything!. Becky poses this query:

How did you come up with the name of your blog? (I was reading Ray Bradbury's Dandelion Wine last night and he likes to compare the town of his youth to Byzantium.)

I've actually given this answer before, but not in a while -- four years, in fact, on the occasion of my second Blogiversary. Here's the relevant portion of that post:

About two years and a month ago, I was lazily doing some Net surfing and engaged in one of my common Net timekillers: doing Google searches for former high school and college classmates. On this particular occasion, I decided to check what was up with a former fellow Philosophy major from the college days, whom I knew had gone into ministry. Thus I found Sean Meade's blog, the discovery of which made me think, "What on Earth is a 'blog'?" I quickly surmised that it was some kind of online diary or journal or something. Seemed like a nifty idea.

And then a week or two later, an article appeared in TIME Magazine, the gist of which was "Hey, there's these really cool things now called 'blogs'! And you can get one for free! Here's how you do it!"

I mulled this over for another week or two, thinking that this would be pretty cool indeed. At the time I was still quite active on Usenet, although I was getting really tired of basically staying "on topic" and thus repeating the same things I'd said over-and-over again. The idea of a "blog" was really appealing, since I'd occasionally considered setting up a personal site where I'd put up essays and such on a sporadic basis, but never come 'round to actually doing so. But the confluence of finding Sean's blog and that article about blogging in TIME basically clinched it.

So I signed up with Blogger and BlogSpot, created my first blog, decided I didn't like the title, scrapped it, and launched a different one. I needed a title, though, and I was having trouble coming up with one. I didn't want to have something like "Jaquandor's Rants", since I don't rant all that often; I wanted something mildly poetic that would basically convey the fact that I would write about anything that interests me (and a lot of stuff interests me). But I had trouble with the title: When writing fiction, I rarely start with a title. Instead, I write for a while until the story's title "comes" to me, but obviously this approach wouldn't work for a new blog that would go unread by, well, millions. I wanted something with at least a little cachet, and This Blog To Be Titled Later had about as much cachet as a shopping mall food court Chinese eatery. (Now, there is Chinese food that leaves me hungry an hour later, if only because it's so bland I can never finish it.)

About that moment, my eye fell upon my copy of Stephen Lawhead's novel Byzantium (which I really need to go back and re-read, since I never finished it the first time, and not because I didn't like it). And this was just after I'd finished reading Guy Gavriel Kay's The Sarantine Mosaic, with its depiction of a fictional Byzantium: a cosmopolitan place wherein all of the world's traditions and cultures met, sometimes for good and sometimes for ill. So I had half the title (Byzantium by itself seemed incomplete), and then I thought of sea shores -- again, places where differing worlds come together, and places where some journeys begin and others end. "Eureka!" shouted I, disturbing the cat. "Byzantium's Shores! The very pinnacle of human coolness on Earth!" [Some details in this account have been embellished.]

And that's how the blog came to be. So, now we're onto Year Seven. How much longer can it go on? Who knows? I'm still enjoying things, so we'll see. This is definitely one of the oldest entrants in the Buffalo Prefecture of Blogistan, and it may actually be the longest active-at-one-URL blog in the Buffalo Prefecture. (I can't really say why that matters to me, but for some reason it does. I guess I've become the guy who keeps plugging away at what interests him, not paying a whole ton of regard to other trends that come along and pass into memory.)

What's funny to me now about reading those first entries from back in February of 2002 (I don't recommend that you do so, but hey, I can't very well stop you) is that in some cases I think, "Wow, what a pretentious ass that guy was", while in others, I think, "Wow, that's certainly me writing that stuff -- a younger, dumber me, but certainly me." It took quite a bit of time before I settled in on my "blog voice", and in some ways I'm still looking for it. But when I do find it, I'll let you all know.

For now, though, thanks as always to everyone who reads this blog. Your overalls-clad hippie narrator appreciates your patronage! 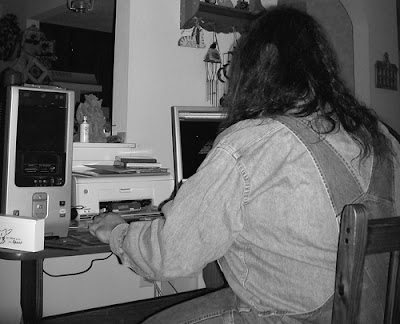 (Yeah, that's basically what it looks like. It's a guy in overalls sittin' at a computer. Wheeeee!)

Email ThisBlogThis!Share to TwitterShare to FacebookShare to Pinterest
Labels: Ask Me Anything 2008, Meta-blog

And thanks for providing this little place and allowing us in.

Congrats on the birthday!