Let a warm glow spread throughout the land! 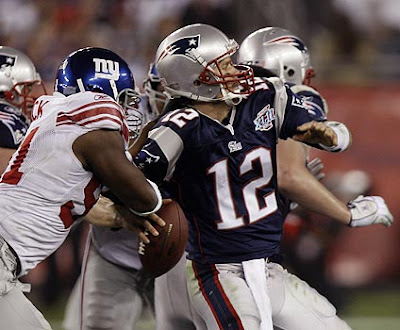 Congratulations to the 2007 New England Patriots, who have just eclipsed the 1998 Minnesota Vikings and the 2004 Pittsburgh Steelers as the greatest team to fail to win the Super Bowl. This is a team that will never be forgotten! Let their praises be sung, and let the faithful advance all the tortured logic they can to assure the world that 18-1 really is every bit as impressive as 17-0, even though all of us who live in the real world know that's just not the case. And let us not forget that Saint Tom has now, for two years in a row, come into a game facing a "score or lose" situation, and walked off the field having opted for the latter. So much for Mr. Clutch, the greatest QB of All Time.

OK, gloating aside, this was a terrific game; it was a sufficiently good game that had the Patriots pulled off the win, either 14-10 or 21-17 or 20-17 in overtime, I wouldn't have even minded. (But if that had happened, I sure as hell wouldn't have posted anything about the game!)
scrawled here by Kelly Sedinger at 10:04 PM

I was fully expecting Brady to lead them into field goal range and send the game into overtime. Then watch someone get loose to score the touchdown so that Burress' predicted score of 23-17 was achieved.