There's a little viral-game running around Facebook right now, in which if someone tags you, you post the cover of a music album you consider to be a great album. You are not tasked with defending the album in any way; all you have to do is pass the game on to some other folks. It's kind of neat seeing which albums people pick, because so far no one seems to be taking the obvious ones. I've seen the game a bunch of times, and I've yet to see Abbey Road or Rumours or The Wall.

So what was my pick? This: 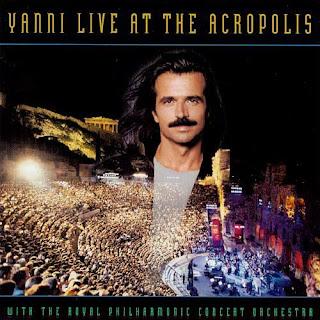 And yes, I totally mean it. Live at the Acropolis is a great album.

Is it great music? Look, let's get real. It's schmaltzy New-Age stuff, with a lot of twinkly-tink piano. But as such music goes, Yanni is far from horrible, and on Live at the Acropolis, the presence of a full orchestra gives his music some weight that it otherwise would probably lack. Also, there are times when a certain kind of magic seeps into a live performance, and this concert appears to have been one of them. There's energy and life in this recording that isn't present in some of the studio recordings of the pieces Yanni would perform that night. It's hard not to feel the energy in "Santorini", for example, or the lyrical magic in "Until the Last Moment". And you know what? If by chance I had my wedding to do over again, our first dance would be "Reflections of Passion".

So yeah, I consider Live at the Acropolis a great album, and I make no apologies for it. Sometimes the music-making itself is good enough to elevate the music itself. This is one of those cases.

Here is the album, in playlist form. However, for some reason, track five -- "Acroyali/Standing in Motion" -- was blocked on copyright grounds, so I present that track after the playlist, by itself. Why they challenged that one track and not the rest of the album (it was all uploaded by the same person), I can't imagine. Sometimes companies do weird shit with respect to their copyrights on YouTube.


scrawled here by Kelly Sedinger at 12:30 AM

The first album I thought of when I saw that thing on Facebook was Dark Side of the Moon but then I immediately thought, "Nah, too obvious."

I love your conviction. It was pleasant enough to listen to.