A night with the orchestra 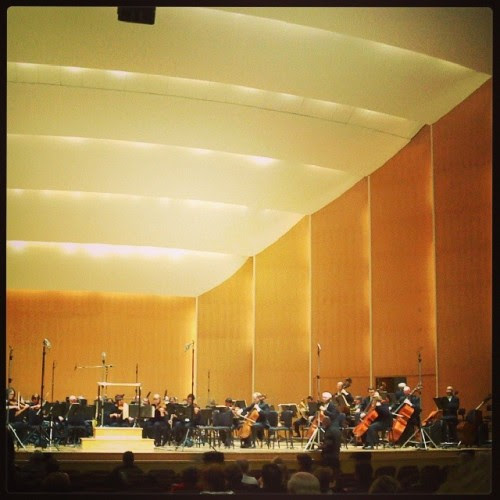 The other night, The Wife and I enjoyed a too-infrequent opportunity to attend a performance of the Buffalo Philharmonic Orchestra. We count going to the BPO as one of our favorite things about living in this region, and it's a shame that we haven't been able to attend in a couple of years. But the stars aligned, in the form of a marketing person with the orchestra offering tickets in exchange for a blog post. So here's the blog post!

Kleinhans Music Hall is one of Buffalo's most iconic buildings, and it really stands apart from just about every other place in the area. There's nothing else like it. Kleinhans soars with curves that invite and pull you in. I always feel that there's something almost femininely seductive about Kleinhans. The place radiates warmth, and the sense that it exists solely to enshrine something beautiful.

The beautiful something Kleinhans enshrines is, of course, the BPO itself. The orchestra's sound is lush and luxurious. Sonically, the orchestra seems to me – if I might draw what may be a very bad metaphor – rather like dark chocolate, deeply rich and complex, built on a foundational bass that rises up and through all the other voices, into the sopranos of the violins. The orchestra's sound is particularly suited to the larger-scale orchestral works of the late Romantic period and beyond, which comprised the main portion of the program.

Attending an orchestral concert in person is always thrilling, and there are no aspects of it that I don't enjoy immensely, even the pre-concert warming-up by the musicians, during which the entire orchestra gradually filters onto the stage. In this way you get to hear tiny "previews" of the music to come as the musicians riff on portions of the scores that they either like to play a lot (or, perhaps, have slight difficulty with), and the entire room fills with more and more sound as the musicians arrive. It's also lovely to watch the camaraderie amongst the BPO members; hands are shaken, shoulders are slapped, grins are exchanged, and laughter is heard. There's always a keen sense that these aren't just professionals doing a job, but friends coming together to work their magic.

The concert led off with Georges Enescu's Romanian Rhapsody #1, which long-time readers may recall as one of my very favorite classical works ever. The Rhapsody is little more than a collection of folk tunes and drinking songs, colored by a Gypsy-feel; it's a work that contrasts lyrical song with rhythmic dance, and Maestro JoAnn Falletta conducted the work with all the vigor I expected. In truth, I was given a choice of concerts to attend, and this work's presence on the program led me to choose this one. (Last week was Vivaldi's The Four Seasons. That was not going to happen.)

The Eastern European feel of the program continued with the next two works, both composed by Hungarian composer Bela Bartok. Now, Bartok is one of the big "gaping holes" in my personal musical knowledge. Fact is, beyond the fact that he was Hungarian, I know nothing about Bartok much at all, and I have heard very little of his music – his famous Concerto for Orchestra, to name one. I've also heard several of the pieces from his Mikrokosmos for solo piano, mainly because that work was one of the prime fascinations of one of my college professors, back in the day. Here we had two works: a two-movement piece called Two Portraits (apparently written in the aftermath of a failed love affair), and a twenty-minute tone poem called Kossuth (inspired by the life of a Hungarian revolutionary and folk-hero).

For me, these works were the highlight of the program. I honestly don't know of any real reason why the music of Bartok has evaded me; certainly I haven't made any particular conscious decision to avoid Bartok. Somehow my own musical explorations have never led to him, though, and on the basis of these two dramatic and emotional works, I see that this is something I should address. Bartok does not wear his lyricism on his sleeve, but he does infuse his work with a great deal of drama, heightening the tension at key points in his scores. I'm reminded of the close of the first of the Two Portraits, a slow work featuring solo violin and the orchestra. At the end, the soloist soars to a pianissimo leading tone, almost refusing to finally settle into the resolving tonic, before ultimately doing so. The music felt like a sigh.

Kossuth, the tone poem about the revolutionary leader, is full of military clangor and sounds of march and battle. As the revolution itself – in 1848 – was unsuccessful, the work ends on a solemn tone. But this was nevertheless a sharply dramatic work that put the entire orchestra on display, particularly the low brass. As always, the orchestra's lower registers are always powerful and sonorous.

After the intermission, it was time for a complete change of pace, and I must admit that I found this programming a bit odd. After an hour of nationalistic music from Eastern Europe, our attentions turn to...Ludwig van Beethoven. This change in mood, from complex post-Romantic orchestral writing to pure Classicism, didn't really work for me – especially since the work in question, the Piano Concerto #2 (which, as the program notes indicate, is actually the first piano concerto Beethoven composed), springs from his early years, when he was still in the process of shaking off his Mozartean roots. I suppose a case can be made that the Beethoven is there to contrast with the earlier music, but in all honesty, I so enjoyed the mood of the program's first portion that to step back into classical music's mainest of mainstreams felt...I don't know. Safe, perhaps. I don't want to sound too disappointed here -- Beethoven is Beethoven, after all, even if it's from his generally less-familiar-to-casual-audiences earlier period, before he was the Beethoven of lore, the deaf composer defiantly shaking his fist at the heavens even as he sets Schiller's Ode to Joy -- but for me, the mood of this concerto clashed with the mood of the earlier works. Perhaps a Shostakovich concerto, perhaps?

Of course, the concerto was played wonderfully. The soloist was pianist Simone Dinnerstein, whose touch in this elegant concerto (yes, Beethoven could be elegant, mainly in his youth) was also elegant, classical, and restrained. I love watching pianists perform, with all their different mannerisms and ways of physically approaching the music. Vladimir Horowitz, for example, barely moved at all, and I've seen other pianists who rock and sway back and forth, and who approach the louder and more raucous parts of the scores with percussive force. Not Ms. Dinnerstein, whose motions were supple and caress-like, as though she was enticing the keyboard to sound rather than playing it. Even in the larger passages, she never seems to dominate the instrument, but exist in a kind of partnership with it. I found her absolutely fascinating to watch, as well as hear. And JoAnn Falletta's accompaniment was able and well-considered; at no point did the orchestra overpower the soloist, and instead the music formed the kind of partnership one hopes for in a concerted work.

Ms. Dinnerstein did play a short encore afterwards, in acknowledgment of her standing ovation. I have no idea what the piece was, but it was perfectly offered: a short, melodic, bravura piece that put her considerable technical skills on display.

And with that, the evening was over. Sigh.

:: As a former trumpet player, I wanted to hear that section more. There are places in the Enescu when I think they can be brought forward, but I'm assuming that Maestro Falletta prefers her trumpets on the more restrained side of the ledger. Bummer, that.

:: In the "watching musicians" department, concertmaster Michael Ludwig has a way of leaning his entire body into what he's playing at key moments. Watching a great musician at work is really one of life's better pleasures.

:: College flashback: I used to be one of the guys responsible for wheeling the piano out onto the stage, and back again, during concerts. I always feel a bit of brotherhood with those fellows. I wonder if they ever find themselves suddenly gripped with the fear that they've wheeled the old Steinway too close to the edge....

:: Maestro Falletta's blouse had a glittered collar, all the way around the back. She was literally sparkling the entire time.

:: More musician-watching: Ms. Dinnerstein has a habit of re-tucking her hair behind her ears after each passage she plays.

:: More musician-watching: Looking at the double bass players, I am secure in my conviction that my daughter's height was a prime factor in her fourth grade music teacher's strong suggestion that she play the bass. Goodness, those fellows are tall.

:: During the intermission, with his work done for the night, the tubist remained on stage to noodle about some of his passages in Kossuth. I wonder if he really liked playing them and knew that this work could very well never turn up on a program he performs again.

:: My opinion about the Beethoven not quite fitting the earlier part of the program, which I loved? Not shared by the elderly folks seated behind me! As they returned to their seats for the Beethoven, one said, "Now the good part!" Another agreed: "I might have fallen asleep during that last thing." Too modern for their ears? Really? Kossuth was written in 1903!

:: Driving home: Downtown Buffalo is still way too dark. But that's for another post.

In short, 'twas a wonderful night with the BPO. May there be many more to come!
scrawled here by Kelly Sedinger at 12:30 AM

I love going to the Albany Symphony orchestra. It is so civilized.

Great post, and from the sound of it, a great night. I'm a bit jealous; the last time I saw a live symphony was visiting Chicago's Symphony Hall as part of a class trip in junior high, and I was too young to appreciate it, and our music teacher was intent on sucking the life out of it, basically just giving us things to notice and check off.

You're one up on me; I confess that, for reasons I can't even imagine, I thought Bartok was Russian.