A Silence of Three Parts 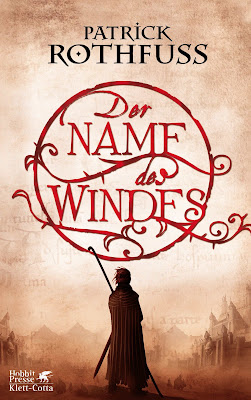 A few years ago, I started seeing mention of a new fantasy author in some of the blogs I read, a guy by the name of Patrick Rothfuss. His debut novel had just come out, called The Name of the Wind, and by the time I heard of this, Rothfuss was apparently starting to have some trouble with the sequel to his first book. I remember reading this in the context of the fan ire that bubbled over towards George R.R. Martin, whose ongoing struggles with the fifth book in A Song of Ice and Fire is a constant topic of vexation among fantasy fans. I didn't actually read The Name of the Wind until just a few months ago, however, when I finally decided to see what the fuss was.

So, what was the fuss? A novel that, it turned out, I had several different reactions to. I loved it and found it to be a compulsive page-turner, so much so that I really didn't find the book's length cumbersome at all. Yes, I loved The Name of the Wind -- and yet I wanted to like it more than I actually did.

The Name of the Wind falls, categorically speaking, in line with other recent fantasy novels that use a more modern approach to language to telling a story that is an epic fantasy. (Another example of this type of book is Scott Lynch's The Lies of Locke Lamora.) And yet, the language is a major element to the novel, and language is also a major theme of the novel.

There are two stories at work in The Name of the Wind. We begin in that old stalwart setting of fantasy novels, the inn in a small, unremarkable village. The inn is run by a man who goes by the name Kote, and he is doted upon by an assistant named Bast who is not what he first seems to be. There are hints that there are troubles in the world at large, with demonic creatures on the loose, harvests failing, and business at the inn down. A scribe arrives who only goes by the name Chronicler, who recognizes Kote as a long-disappeared hero named Kvothe, and Chronicler convinces Kvothe to tell him his story.

At this point, most of the book takes place as flashback as Kvothe tells his life story. His life is deeply complex, and most of the pleasure of the book for me came from following Kvothe's life as he struggles to overcome the horrible things that happen to him. He first grows up as a member of a traveling troupe of musicians and actors, but then his entire family is murdered by beings called the "Chandrian", because his parents "have been singing entirely the wrong sort of songs". Kvothe escapes, and ends up living on the streets in a brutal and filthy town. Using his innate intelligence and competence, he makes his way to the University, where he starts to learn about magic. This may sound like a Harry Potter tale, but Kvothe's story has a very different feel, and despite the fact that Kvothe is intelligent, witty, and good at most things he tries, his life has the feel of constant disaster as he fails to recognize enemies even as he makes them, annoys teachers, commits errors of judgment, and falls in love with a woman named Denna who comes and goes with little or no warning.

This book is long and rich, and it's so packed with stuff going on that it's clear that Rothfuss is liberally scattering story seeds everywhere; the book is full of characters and details that scream out as "important somewhere down the road". Part of the pleasure will be seeing how it all fits together, in the end, and how the two stories – Kvothe's earlier experiences, and his adulthood after he has set aside his life as a hero – come together. My main, and really only, reservation, lies in the way Rothfuss often uses more modern idioms and methods of speech than one might usually find in a fantasy novel. I found the way a lot of the characters talked jarring and out of place, and it wasn't something that I was able to quickly get used to. Nevertheless, the pages keep turning, and the richness of the story sneaks up on me. This novel would be a good book to give someone who doesn't love fantasy all that much. Or for those who do love fantasy all that much. Basically, it's good for people who like good stories that don't always go where you think they're going and which have engaging characters.

(My review of the sequel, The Wise Man's Fear, will be appearing on GMR, probably a little bit after I write it. A preview: It's good. Really good. I am now a Patrick Rothfuss fanboy. That cover art up there, also, is the German cover. I don't have that cover art, obviously, but I love the way it looks, a lot more than the American paperback art that I ended up with.)
scrawled here by Kelly Sedinger at 7:10 PM