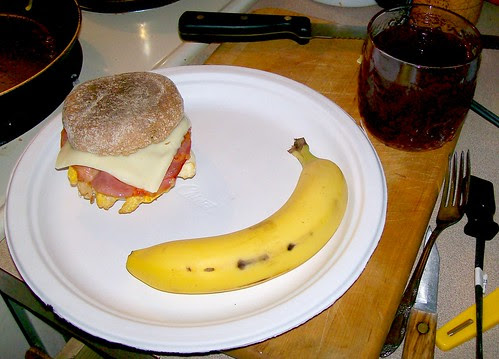 For years I've generally been a breakfast cereal person, but over the last month or so I've started indulging heavily in a heartier breakfast, in the form of a breakfast sandwich. I toast an English muffin (I prefer multigrain, but those sell out quickly so usually I end up getting Whole Wheat), onto which I stack an egg (cooked over-hard -- even easier than scrambling), a slice of some kind of cold cut that I've fried ever-so-briefly in the pan alongside the egg (usually ham, but on this one I had some Capicola, which is by far my favorite cold cut but which I don't get often because of the salt and fat), and a slice of cheese (pepperjack in this example).

A banana and a glass of juice complete the meal. More than 90 percent of the time I drink good old orange juice, but every few months I decide to change it up just a bit and get something else. Sometimes it's grapefruit; here I'm drinking a V8 blueberry/pomegranate blend.

Next week I plan to try one with salsa on it instead of cheese. Or a breakfast wrap. Breakfast rules!

That breakfast certainly rules! The photo was enough, but the description drives the pleasure of it home.

I remember a proverb from when I had taken German in high school, I think would apply: "Eat breakfast like a king, lunch like a prince and dinner like a pauper." I think applies to European cuisine in general. Too bad I haven't been able to apply it.

You are living a rich full life my friend. Now I want cereal.

the simple meals r always the best arent they