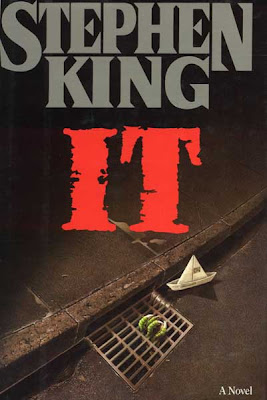 I'm not the biggest Stephen King fan in the world. I find that he can be hit or miss, which is probably to be expected of a writer so prolific as he. I haven't read everything of his; not even close. I've read some stuff of his that I liked a good amount (Salem's Lot), some stuff that I enjoyed a bit less but still liked just fine (Carrie), some stuff that I outright bounced off (Dreamcatcher), and a range of reactions thereof. But I have also read a good deal of his work that just blows me away (The Stand, numerous short works of his). I've often seen King's It cited as one of his best and scariest novels, but I'd never read it until just a short while ago. And wouldn't you know: it's one of his best and scariest novels. It's also, in my opinion, a great novel.

The book opens with a scene of fairly shocking violence as a small child is killed in the town of Derry, Maine by something that lives in the sewer. It calls to little George Denbrough as he is floating his newspaper boat down the street gutters which are swollen with rain; it appears to him as a clown dwelling within the sewer grate, and when it beckons to him with the promise of cotton candy, the clown – named Pennywise – grabs George's arm and pulls on it, pulls harder and harder, until it rips free and little George dies. Thus begins Pennywise's reign of terror in Derry in 1957, which eventually turns out to be a cyclical event; Pennywise shows up every 28 years or so for a fresh round of violent killings. Meanwhile Derry goes on, as it always has – a sad town where life just kind of grinds on and on, until the grinding of the decades is punctuated by the murderous awakening of the malevolent clown that lives in its sewers.

The main characters in the book are a group of teenage children, and the same children as adults, in 1985 – twenty-seven years after the 1957 arise of Pennywise, and therefore on the cusp of the new one. One of the kids is little George's older brother, Bill, and as the summer of 1957 begins, none of them knows each other well at all, but circumstances bring them together – circumstances like Pennywise and the fact that they have each been targeted by the local bully, a boy named Henry who is in his own way as malevolent as Pennywise himself, who is actually the embodiment of something almost eternal. And in 1985, the kids – now adults – are brought together again, back to Derry, to do battle with Pennywise again. The novel shifts back and forth between these two timeframes, and King does this with such amazing facility that it is actually two stories unfolding at the same time. The 1957 parts never once feel like mere flashback, even though we know that by definition the characters alive in the 1985 chapters of the book must therefore survive the 1957 parts. It's a testament to King's skill that instead of grinding through large segments of the book given over to flashback, we instead sense that we're following two stories that happen to befall the same group of people, many years apart.

King's sense of pacing is pretty remarkable, given how long this book is. Even more impressive, though, is King's ability to create a number of characters, this circle of friends bound by grim destiny, who are all vivid and real. Ultimately this is why the horror in the book works, and why It is such a scary read. It's not all about ratcheting up the gore quotient; it's about depicting horrible things befalling people we care about. But more than that, King's gift for not only creating people we care about but also for people who genuinely feel like real people, and who respond to things in a very real way. This is King's great strength as a writer, and it's on tremendous display here. Not only are we sympathetic to Bill and Eddie and Beverly and Ben and the others, but we see them react to events in ways that we might well react ourselves if we found ourselves confronted by the kinds of horror that confront them in It.

That's another of King's great strengths: his knowledge that there are, in fact, many different kinds of horror. The scary stuff in It comes in a wide range of types, and not all of them are supernatural. In fact, some of the scariest events in King's book don't involve anything supernatural at all: they are the terrors we all remember (or maybe only some of us remember) from being the kid singled out by the school bully for continual "special treatment". There is more than one way to scare a reader, and King at his best always does. In It, King creates for us a group of outcast children who feel like outcast children and who suffer all the normal horrors that many outcast children face, even before they are confronted by the horrible clown who lives in the sewers of Derry.

A word about the setting: Derry is a fictional city in Maine, which is a setting used by King in a number of other works. It's not, as far as I know, a "redressed" version of a real place, but a creation from King's viewpoint of the kind of city you'd find in Maine -- if that city happened to be the scene of numerous supernatural horrors throughout its history. Several times in It, it is suggested that the kids aren't just battling a demonic clown, but some kind of darkness in the very spirit of Derry itself. King portrays Derry as an organic being all its own, with a long -- and very dark -- history that we learn along the way. The book, therefore, spins three stories together: our child heroes in 1958, their adult exploits in 1985, and the long dark travails of Derry itself.

And yes, this book is scary. There is some extremely disturbing imagery throughout the book, and particularly so in the last 150 pages or so, when the tales in both timelines start plowing toward their respective conclusions. The ending is moving, satisfying, and poignant. It is amazing. If you have any love for the horror genre at all, read it.
scrawled here by Kelly Sedinger at 9:17 AM

I should revisit It. I haven't read it since I was probably a teen myself, and I expect the experience would be different.

Have you read The Shining? That's probably my favorite, next to The Stand.

I haven't read IT in probably 20 years, but remember being totally blown away by it. I'm a major King fan myself (although I freely admit that he stumbles from time to time, and when he does, wow, he stumbles BIG); I agree with your assessment of his greatest strength, i.e., his command of characters. No other author has so completely captured the concerns and tenor of the American working class and lower-middle-class of the late 20th century, in my opinion. Future generations are going to value his work for this, if nothing else. (And yes, I do think he's going to be read in the future; I used to have regular arguments with my lit teachers about that back in college...)

I loved, loved, loved this book! I've lost count of the number of times I've read it over the years. The movie pretty much fell short tho' IMO... but then again, movies never live up to the book in my head :) Pet Semetary is another example of a great Stephen King book where the movie fell short...