Clearly this series of posts isn't impressing anybody, because nobody has bothered to remind me about it! But anyway, we'll continue now, picking up with Ohio:

The first time I looked at Ohio's quarter, my reaction was, "Huh?" It's the ever-boring state outline, with a picture of the Wright Brothers' airplane prototype and a spacesuited astronaut, explained by the helpful motto: "Birthplace of Aviation Pioneers". The Wright Brothers were born here, that's obvious, but who's the astronaut? Was it just John Glenn, or others? So Ohio used its quarter to honor famous people who did their famous things someplace other than Ohio. OK, I guess, if you like that sort of thing. I, however, am underwhelmed. They could have mentioned Cleveland's place in the history of rock-and-roll, for example. Meh.

Another state that proclaims itself a crossroads, but this time, it's the Crossroads of the entire country. Yup, the quarter reads: "Crossroads of America". There's a ring of stars on one side with a larger star in the middle of it for some unknown reason, a boring monotextured state outline, and a Formula One race car honoring the Indy 500. This design just screams out "Mailed in by the committee for designing a quarter the night before the assignment as due". 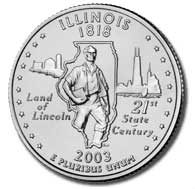 As much as I love the Great Lakes region of this country, I've gotta say, the quarters these states have come up with are all pretty uninspiring, with New York's being the best of the lot thus far. Here's Illinois, another committee-designed hodgepodge of elements that had to be included: Illinois has farms and Chicago, and it gave us Abraham Lincoln, and it's the twenty-first state, and the coin reminds us that we're in the 21st century now, and let's not forget the constant state outline. They probably felt they had to get Lincoln on there, since nobody takes the poor penny seriously anymore, but every state has farms and big cities, and the "21st State and century" bit is just goofy.

Finally someone in the Great Lakes region gets it right! See, you don't have to jam your quarter with lots of unrelated stuff. Michigan shows all five Great Lakes, with Michigan itself rendered topographically. Simple and therefore successful. 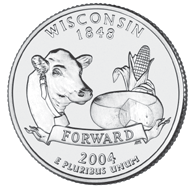 Folks, I have nothing against cows, cheese, or corn. But this, along with the banner reading "Forward" (which has nothing to do with the other design elements), just looks slapped together at the last minute, like Indiana's. At least they didn't stick an outline of Wisconsin on there...but this quarter isn't terribly inspiring. 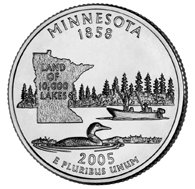 I like the scenic picture they used here, the boat on the lake and the duck (although the duck is so big, relative to the boat, that it feels like they crammed two pictures together), and I'd rank this quarter higher if not for the Minnesota outline, which screws up the composition entirely. 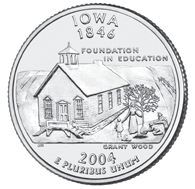 On my personal pantheon of states that have been most important to me over the years, Iowa's probably second, since I went to college there. The state really does take eduction really seriously, and they chose to reflect this on their state quarter, while at the same time honoring favorite son and artist Grant Wood. It's nicely done. 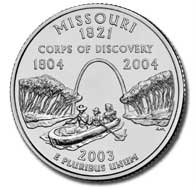 I like the design here a lot: it's nice and symmetrical, with what I assume is the great Mississippi River with three people rafting past woods on either side, with the Gateway Arch in the distance. Nothing much to critique here.

That's all for now. Next time, we'll finish the South and move into the Southwest.
scrawled here by Kelly Sedinger at 8:15 PM

I was just thinking today, "Hmm, I wonder when Kelly is going to do the next in the State Quarter Series." Seriously.

FWIW, it's a loon on the Minnesota quarter. It's our state bird.

Oh, that's Lewis, Clark, and Sacajawea on the Missouri quarter (I looked it up). I was thinking Tom Sawyer, Huck, and whoever.

I love your state quarter series. I was just trying to be patient. (But hurry up and get to Oklahoma.)

I agree with you about most of these. I do sort of like Wisconsin's quarter though. Not that I'm all that fond of cows and corn and cheese. (Well, I am quite fond of cheese) I just think it's kind of a nice, appropriate design and with only three things (all agriculture related) and the banner it's not too busy like some of the others.

(I too was wondering what had happened to this series.) I'm a nearly-lifelong Michigan resident, and I wish that the state had done something in addition to a map with our quarter. Nice to see some love thrown its way, but to me, this is one of the dullest in the series. When the series was announced, I predicted that Michigan's would be dull, largely based on our very boring entry in the Absolut 50 states campaign of the mid 90's. Sometimes vindication bites it.

Thank goodness Jaq is back w the quarters! I'm collecting, you know. (BTW, anyone out therer happen to have a Missouri quarter, Denver mint? That'd complete my collection of what's been released through DC.)