Waiting for an absolution that would never come. 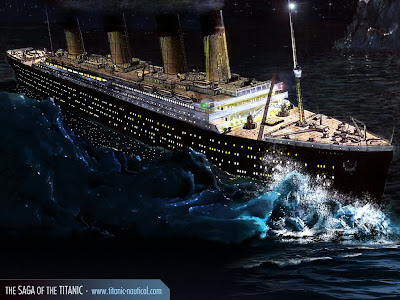 Ninety-seven years ago tonight, the HMS Titanic was steaming across the North Atlantic when it hit an iceberg and sank two hour later. It's a well-known story, obviously -- but it's one of the most compelling stories of the modern age, being one of the most famous reminders that with all our technological prowess, Mother Nature can always lift a hand and swat us down like the mosquitoes that we probably are, in her eyes.

Sheila has a nifty post up about the sinking, in which she ruminates more on people who develop a high degree of interest in the ship and its dolorous fate. Sheila's posts often teach me something new, and this one is no exception: I had no idea that photos exist of the probable iceberg itself. 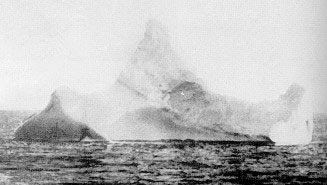 The Earl of Obvious said...

I have an idea for a one act play on the titanic but the story has been told so many times I am afraid it would be judged bromidic before even being read.