OK, I'm a day late on this, but at least I'm still posting the same week, right? Anyway, time for the usual housekeeping: last week's UI 63 was correctly identified, first by a reader who thought it was Cape Canaveral, which was correct in the general sense, and then was pegged down specifically by the second commenter therein as one of the enormous crawler-transporters that carry the spacecraft and their rockets from the Vehicle Assembly Building to the launch pads at Kennedy Space Center. I thought it was incredibly cool that Google Maps had satellite imagery of one of the crawlers on the road. Scotty gets a hundred Quatloos, but Dave gets the remaining 900.

UI 62, however, is still Unidentified. This location is in the Pacific Northwest, and as noted, is the world's smallest example of a certain type of location.

And now, without further ado, the new puzzler! I'm not expecting this one to be terribly difficult: 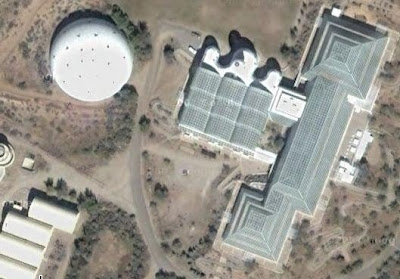 Where are we? Rot-13 your guesses, folks!
scrawled here by Kelly Sedinger at 6:09 PM