I'll probably have more to say tomorrow about the Bills' encouraging defeat on the road of the Miami Dolphins, but for now, here's something I noticed when looking at the FOX Sports recap of the game. Specifically, it's a section of that site where they compare the performances of the quarterbacks. Here's a screengrab of the little portion I'm talking about: 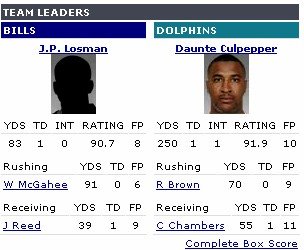 There's JP Losman's numbers on the left, and Daunte Culpepper's on the right. But note: there's a headshot of Culpepper, but none of Losman!

Hey, FOX Sports, what the hell is up with that?! Sure, Losman's still a young player who may or may not blossom in the NFL; and sure, the consensus opinion going into this season seems to be that Losman's a major bust of a first-round draft pick waiting to happen; but he's not a bust yet, he's a third-year player, and he is still for the moment a starting quarterback for a team in the National Football League. Shouldn't you guys have a friggin' headshot for the guy by now? Sheesh.
scrawled here by Kelly Sedinger at 8:15 PM

congrats on the Bills win.

i'm pretty freakin' stoked about the Vikings at 2-0!