Still active after all these years

In the hallway at The Store that leads to the public restrooms, the walls are adorned with prints of old photographs from the community (West Seneca, NY), which I assume were procured from the local historical society. I've looked at each of these photographs in the time I've worked there, since part of my job involves cleaning those restrooms; one of those photos, though, has been particularly interesting to me in that time. Mainly this is because it is on the wall directly opposite the Ladies' Room, and I often have to stand outside this room for several minutes while those persons inside finish their duties, thus giving me time to study this photograph.

I've looked at the faces in that photograph many times, and I've come to see personalities within them, just from the way the people look: their postures, their expressions. The photograph is of a schoolroom, and the people are the schoolkids -- probably in the ten to eleven year old range -- and their teacher. I see things about these kids, and I'm always wanting to discuss these observations of mine with someone else, but restroom cleaning's a pretty solitary job, and none of the women exiting the restroom (or entering, come to that) are ever much inclined to listen to the musings of the maintenance guy on the old photo.

This, in short, is a job that blogging was meant for. But how?

Well, today I'm standing there as usual, waiting for my opportunity to tidy up that restroom, and it suddenly occurred to me that my cell phone has a camera. I took a shot of the old photograph, e-mailed it to myself, and now I can at last present it here: 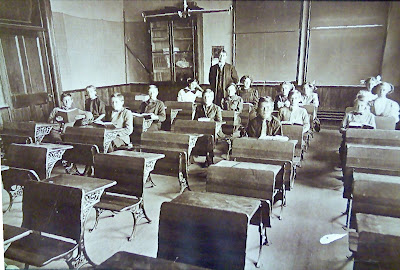 First, all of the kids are in the back of the room with a bunch of empty desks at the front, which makes it clear that they all moved to different desks to accommodate the photographer. Also, no one is smiling, which is the way things usually are in old photographs like this -- when did smiling become the standard behavior for photographs, anyway? But maybe there's a tendency to assume that a lack of a smile means a lack of display of personality, and it turns out, that's just not the case.

The teacher, standing in the rear, looks like a fairly stern fellow, but this might not be the case. In any event, he's totally focused on the photo being taken: his suit is in perfect order, his posture is straight, and with his hands folded behind his back, he looks like he's in confident command of this classroom.

A lot of the kids are in similarly straight, controlled postures. But not all of them. Look at that girl just to the teacher's right: she's turned slightly toward the back, she has her elbow rested on the back of her chair, and she's leaning her head against her hand. Also at the back of the room (rear seat, second column from the right) is a girl who is leaning forward with her arms folded on the top of her desk. That interests me, since most everyone else has their arms carefully down, out of view. It's interesting to contrast those two girls with, say, the one in the second seat back on the rightmost column: that girl is the very model of the posture one expects from a photograph in this era. Her back is utterly straight, her head is held precisely forward, her arms and hands out of view.

Turning to the boys in the photograph, other interesting things appear as I look at this. All of the boys have open schoolbooks on their desks. (In fairness, the angle makes it hard to determine conclusively if the girls are sitting without books on their desks, but I don't think they are.) I don't think this says anything about boys and girls, necessarily. Or maybe it does. I'm no historian of education, after all; does it mean anything that the boys have the books?

Again I turn to posture and clothing. All of the boys wear ties, either long ties or bowties. Of the seven, four wear jackets. That boy at the far left is wearing a sweater, it appears, and his left arm is cocked back onto the desk of the girl behind him, and he's holding his book in what appears to be an exaggerated pose. Nobody's going to do much reading of a book that size from that posture, so it seems to me that this guy's showing off a bit. Maybe he's the cocky one, the class clown.

Moving rightward, we have two boys in jackets and bowties. Nothing about the boy in front really stands out, but there's something about the boy behind him that's stronger, more assured. This kid always looks confident as hell to me, and there's something about him that says "rich kid" to me -- maybe it's his jacket and upright, strong posture. Frankly, he looks like George Will a bit, doesn't he? Yup, this is the banker's son, I'll bet. Here's the class Republican. (I kid, there -- but he does have that upper-crust air about him, even however-many-years later.)

Of the other four boys in this photograph, the two that interest me are the ones sitting in the front of the right two columns. Taking the boy in the dark shirt and light tie, it interests me that he sits kind-of slumped down fashion, with his arms flopped down at his side. He isn't even feigning an interest in the book on his desk, the way all of the other boys are holding their books as if to suggest that their actual studies are being photographed. This kid is having none of that. This kid looks to me like a blunt, working-class type: not dumb, but rather of the mindset that this particular exercise is just another example of the kind of BS in life that's best got done with right fast.

The boy at the far right is terribly interesting to me. First, he's not sitting in the center of that desk; he's edged all the way to the right of the seat. This is probably because it's not his normal seat at all, for the reason stated above, but it makes him look terribly uncomfortable anyway, especially in light of the way he is holding his book at an angle and looking up at the camera in a terribly sheepish way. Whereas the last boy wanted to get the photograph done with because it's all just a dumb waste of time, this kid doesn't want to be photographed at all. This kid looks scared to me, timid, as if he's the kid who spends every moment of his school day praying, over and over again, like a mantra: "Please don't call on me. Please don't call on me. Please don't call on me." He's in the front of his column, and he looks totally ill-at-ease with this.

What else about this photograph interests me? Well, there's the total lack of decoration in this classroom. I know it was an earlier time, but no hanging skeleton, if it's a science class? No wall maps? No chart of the proper forms of the letters of the alphabet? What's with the apparent netting on the walls? Are there decorations that were removed for some reason at the time of photography?

I also love the desks. I remember desks where chair and desktop were one unit, but these somehow reverse it: the chair is attached to the desktop for the student behind, not the student sitting in the chair. And, of course, this was the era when iron furniture had all kinds of ornate stuff going on in and around the framework. There's a real sense of craft here.

Unfortunately, the tag that was once attached to the photograph, thus identifying its time and place (in the lower right corner you can see where the tag once was), is long-gone, so I can't speculate on how old any of these kids might be if they were alive today (or if that might be feasible in the first place). It's still a fascinating window into an earlier time, when even the apparent formality of a schoolroom photograph couldn't totally suppress the individual personalities of the children.
scrawled here by Kelly Sedinger at 5:17 PM

Way cool. I just got done with a major scanning job - digitizing 75 old pictures from early 60's of various scenes at the college where I work. Not nearly as old as this picture, but still a hoot to peer into those faces and imagine the world they lived in.

I used to eat lunch at another location of "the store" (and would go there on breaks to use the potty since well- those were cleans, the one at my store wasn't).

I used to love looking at the pictures of early Amherst.