UPDATE: The video for the performance I chose, for some reason, won't embed here, so click through to hear the music.

A day late, but not my usual excuse this time! I wasn't too busy...in fact, I was all set to post, but I couldn't pick out a piece of music for this.

You see, yesterday Sheila O'Malley posted about the work of painter Edward Hopper, the artist behind Nighthawks and other famous paintings that suggest urban loneliness and solitude. In Sheila's words:

I love the loneliness in Edward Hopper’s work. The insomnia. The urban midnights. The voyeurism. The emptiness. If you’re heartbroken, Hopper is your kindred spirit. I find his paintings very sad, sadness you can wallow in. Many (most?) people do what they can to avoid loneliness. I have never been able to pull it off. All the lonely people, where do they all come from?

Living in a major metropolitan area, you are constantly up against other people’s lives. People have private moments in public. You can peek into people’s windows as you walk by. You give each other privacy as best you can. People can weep on the subway, and nobody freaks out. Everyone clams up, goes into their own private head-space, and the weeping person may as well be in her own room for all the attention she gets. Believe me: having been that weeping person, there’s a comfort in anonymity. There is nothing quite like the freedom to be left alone.

At the same time, there is the sense of being privy to other people’s secrets. There are just so many damn windows. How do other people live? How are they managing?

Here are a few of Hopper's paintings, including, of course, his most famous painting, Nighthawks. 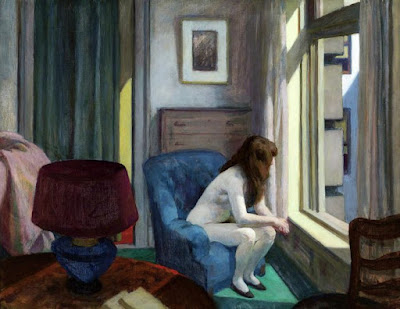 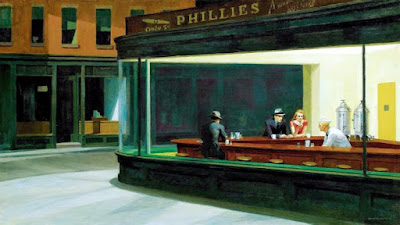 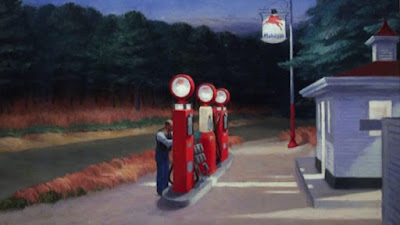 A lot has been said and written about Nighthawks, and those four people in that cafe...but what catches my eye is the storefront across the street. There's no merchandise on display in the window. Nothing at all. If the couple from Phillie's wants to window shop, there's nothing there to look at. Just a cash register, and a printed bill in the window that we can't read from this distance, so we don't know if simply says "closed", or "closed forever", or "seized by the IRS", or...anything at all. And above the storefront...equally vacant windows into offices or apartments.

So, back to the music. I read Sheila's post and wanted a piece of music that conveys the sense of loneliness that Hopper creates in many of his paintings, and that's where I struggled. I could have picked a song, maybe the title track, from Frank Sinatra Sings For Only The Lonely, but I just wrote about that album recently and wanted something else. Slow ballads, maybe...or songs about urban life, like Glenn Frey's 80s potboiler "You Belong To The City"...but nothing really fit, and I'm not sure this piece fits either, but I'm going with it.

Debussy, like Bach and Chopin, wrote a series of short pieces for keyboard that he called Preludes. Where Bach and Chopin used their Preludes to explore each key in the chromatic scale, Debussy did not. This Prelude was written in D minor and is titled "Footsteps in the Snow". Its character is cold and austere, with one particular motif recurring throughout in almost chant-like fashion. About halfway through we get a genuine break into lyricism, but the mood shift is short before the lyrical melody carries us right back to the work's core motif, a sad and insistent motif indeed.

Does "Footsteps in the Snow" suggest the same kind of loneliness that Edward Hopper suggests in his paintings? Well...I suppose that's for the listener and the viewer of the art to decide, isn't it? Debussy is definitely conveying some kind of cold, quiet, hushed solitude.

Maybe it's odd to be thinking of quiet urban solitude in the bright summery suburban days of my life right now, but the cold is always coming....

I can recommend parts of the book This Brilliant Darkness by Jeff Sharlet. A lot of urban aloneness. https://www.rogerogreen.com/2020/02/16/author-jeff-sharlet-at-apl-april-22/