A repost, published in 2008, on the occasion of Harrison Ford's 79th birthday. Ford has long been one of my absolute favorite actors. 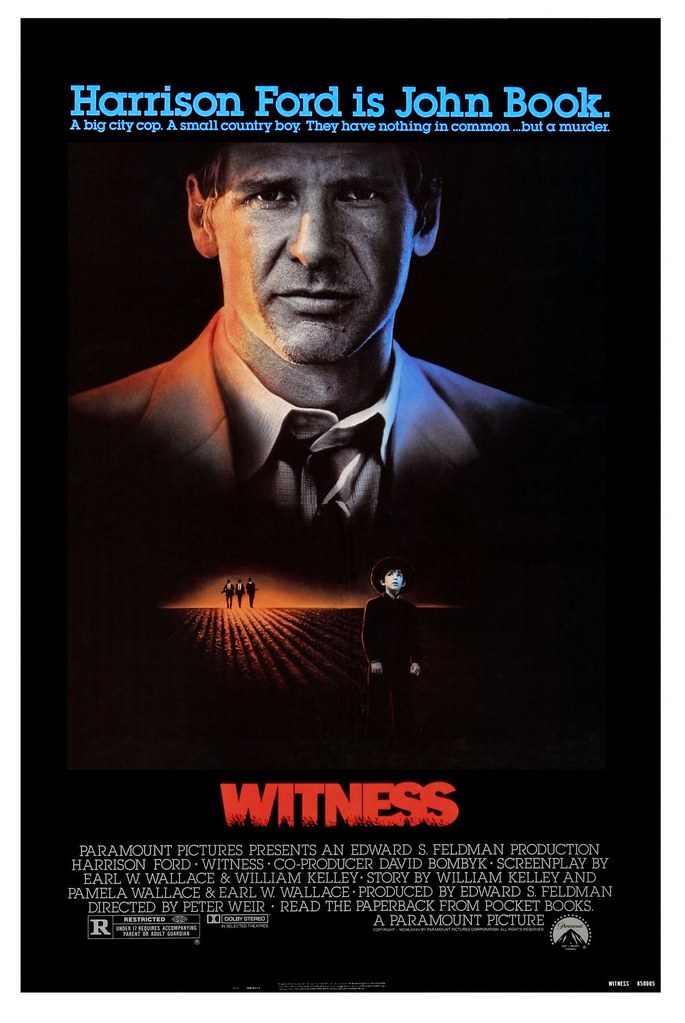 Sheila waxes poetic on one of my favorite movies, Witness. (Yeah, I didn't rank it highly enough.) Here's Sheila:

Let's look at how delicately things are set up in this film - so much so that you don't notice them. John Book has recovered (somewhat) from his wound and Samuel Lapp takes him on a tour of the farm. He shows him the well. ("It goes ... it makes ... it goes ..." so cute) He shows him the silo and tells him how it works. He shows him the trap door. All of this will become crucial in the final scenes, as John Book sneaks around, trying to evade the murderers. But what becomes clear, beautifully, in subsequent viewings - is that it is SAMUEL who showed Book the way. It is SAMUEL who, innocently, gave John Book the tools for survival in those crucial end moments. And so the title of the film takes on even more meaning, more depth. WITNESS. "What's up there?" asks John Book. "Corn," answers Samuel. Notice the grace and simplicity of how that information is imparted. You might not even notice it. A lesser film would have just had John Book figuring out how the silo worked while he was under the gun (which is how so many thrillers operate - they ARE their plots. That's it.) ... but in Witness we are introduced, via Samuel, to "the way things work". And he's excited to show John Book around and to show him the well and also to show him how much he knows. It isn't until later that we realize what Samuel Lapp has done, in that innocent tour.

She's absolutely right. The exposition there is handled so well. Problems can often arise with this kind of thing, in movies like this; they've got to get that gun onto the mantle in Act One so it can go off in Act Three, but so many times, the filmmakers go overboard, making it blindingly obvious that they're setting up something for later. This quiet scene between Samuel and Book, where Sam's just showing Book around the farm, helps us get our bearings, and we never realize that we're being set up for the climax.

Done wrong, this sort of scene-setting stands out like a sore thumb. A perfect example is in James Cameron's Aliens, where we have that early scene where the one female Marine is demonstrating the robotic forklift-you-can-wear thing: there's never one iota of doubt that Ripley will be putting that thing on and using it as a weapon by film's end. That's just badly done. Of course, Cameron would later get it right in Titanic, where he knew that he would have to make clear to the audience what exactly was going on at each stage of the ship's sinking, but he also know that he couldn't stop the tension of Rose and Jack's harrowing exploits in the ship's water-filled lower decks to explain it all, so he gives us the computer simulation of the sinking early in the movie. We never have to stop the action so Jack can tell Rose something like "See, the ship is going down by the head, so the stern's going to rise up. I just hope the ship's hull can withstand that pressure, because if it can't, the ship will break in two!" Likewise, in Witness, we're spared John Book talking to himself (us), saying things like "This is a silo! I'll bet there's corn up there!"

Sheila's post also gives an appreciation for Harrison Ford's work in Witness, a performance that Ford has never since come close to equaling. His work in this film is as good an example of character creation as I've ever seen. There's not one moment in the film where Ford in the slightest way echoes something he did as Han Solo or Indiana Jones. His performance is full of tiny little touches, moments it's so easy to miss, that add up to John Book being a real person, and not just a guy on a screen. I commented over there as follows (fixing my own typos):

Every time I watch this film I get a little more sad that this appears to be the last time Harrison Ford really used his talent to great effect. His performance is full of so many little details. I love how, after Eli interrupts his dancing with Rachel, he heartbreakingly wipes the sweat of his forehead on his shoulder. I love how the first time he's handed a glass of lemonade (by Rachel) he downs the whole thing in one gulp, but the next time (by Hochleitner) he takes a single small sip and hands it back. I love how at the end, after he's beaten the bad guys and all the cops are there on the farm, he's standing there, leaning exhaustedly against a police car, having a much needed cigarette, when we haven't seen him smoke at all in the whole film to that point. I think that a good test for people I meet is to see if they give me a knowing smile when I tell them to "Be careful out among them English."

Of course, I could go on. I love the bashful smile that Rachel gives John Book when they're in the workshop and Book's working on fixing the birdhouse he'd earlier driven into. She's smiled at him politely before, usually with her lips, but this is different; she shows her teeth here in a full smile that's at once more revealing and yet more shy than she's been to that point. I think that's when she first starts realizing her attraction to Book, because of the line that accompanies that smile, a very simple observation on her part: "You know carpentry." In that moment I think that Book stops being something alien to her, some being almost literally from another world she can never know. I think that's where it starts. Witness really is full of tiny moments of magic that you don't even realize are there until you think about them.

(One of my favorite bits of trivia about Witness is that the barn dance was filmed during daylight in the middle of summer. Since it had to be night, the crew basically draped tarps over every entrance to the barn, thus creating the necessary darkness, but also making it really really hot in there; hence the sweating that only highlights the emotion of the moment.)

For me, just about the only flaw in Witness is the film's score, by Maurice Jarre. It was the mid-80s, and at the time Jarre was into heavy synthesizer use, and this score is just about entirely on synth, if not entirely outright. Some of the atmospheric music early on works nicely, but it's all mostly long chords that set a tone, and of course, the barn-raising scene is a wonderfully scored sequence. (When watching it, there's a bit early on where John Book introduces himself to a new group of Amish men he hasn't met before. The first one whose hand he shakes, the one in the light green shirt? That's a young Viggo Mortensen, there, fifteen years before he'd take up his role as Aragorn son of Arathorn, King of Gondor.) The score's "suspense" material is all fairly routine and a bit repetitive; none of the music hurts the film, but I've always thought that the film would have been better served with a more strong touch of melody, excepting that great barn raising set piece. (Speaking of which, "Building the Barn" is done brilliantly by full orchestra on the Jarre compilation album The Emotion and the Strength. You can listen to a different recording of that orchestral arrangement here. On a more personal note, this bit of music reminds me strongly of one of my favorite days of my recent years.)

Anyway, you all be careful, out among them English.