OK, here's a question regarding driving behavior and roundabouts: Do you use your turn signal when entering one?

But before I get to that, let me just note that I love roundabouts. I find them civilized and much less prone to idiotic bullshit than your typical 4-way intersection. There's no running red lights, and there are no pesky left turns which always gum things up. Studies a-plenty have demonstrated that roundabouts are not only safer (producing far fewer accidents per capita than standard intersections), they also move more traffic through an intersection in a given time than lights or the combination of four-way stops and relying on people to know the right-of-way rules will.

(On that last topic: People suck at right-of-way these days, and it's only getting worse. What happens at YIELD signs always irritates me: if you have no sign and I'm sitting at a YIELD, what happens is YOU GO, and I wait until you've passed to do anything. What is not supposed to happen is you coming to a complete stop and waving at me to go. The same similar thing happens at 4-way stops all the time. If two cars arrive at the same time, the one on the right is supposed to go. What actually happens, if I'm the car on the left, is that the nitwit on the right starts waving at me to go. This shit drives me crazy and my approach is to ignore the waving and look the other way until they go. But anyway, back to roundabouts.)

I see more and more roundabouts in my travels these days. There's been on in the village of East Aurora for years, and now there are several in the village of Hamburg (more on that below). I've even learned, via Facebook, that my old hometown of Olean has several roundabouts in its downtown! I'm sure this went over very poorly down there, just from what I remember of that city's denizens: it's a very conservative area that tends to be deeply resistant to change. Sure enough, a Facebook group I occasionally check out about Olean's history had a thread recently about the roundabouts, and there was comment after comment to the effect of "I HATE THE ROUNDABOUTS!" And one fellow actually said my favorite talking point when people want to resist change: "Roundabouts work great in Europe, but they're not for Americans!"

I always wonder just why such people think that "Americans are too dumb and/or stuck in their ways to do anything new at all, ever" is such a virtue, but again, I digress.

So, back to the roundabouts in Hamburg. There's one right in the village core, and as we travel to Hamburg every week for a trip to a bakery there and to the Farmers Market in the summer months, we go through this roundabout more than any other. On this past Saturday we drove through there, and something odd happened. Here, via Google Maps, is the roundabout in question: 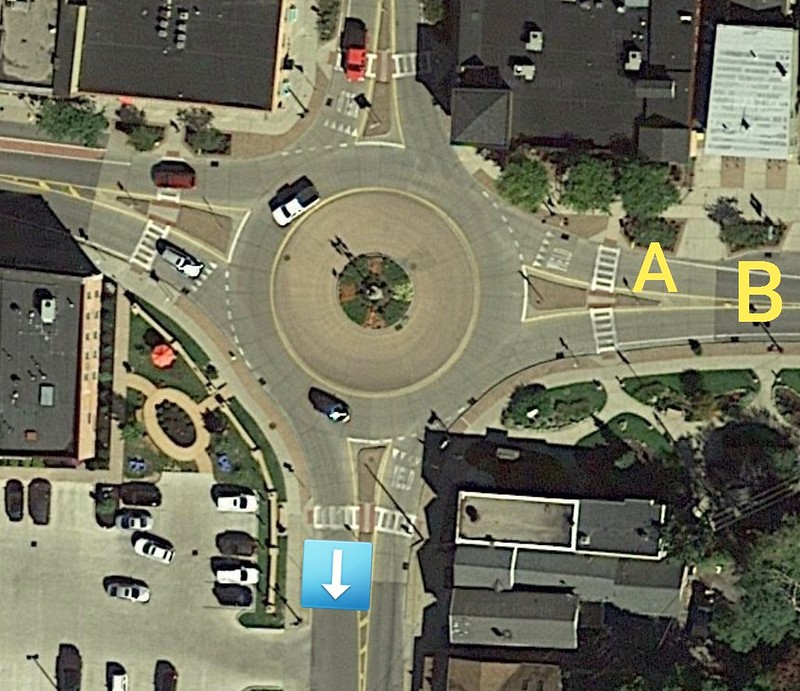 We were at the spot labeled B in the pic, heading west, into the village. Ahead of us was another car (who had already done a couple of confusing things, which made all this stand out in my head). This car was at position A, just about to enter the roundabout and therefore bear right, when they turned on their left turn signal. This is because they were heading for position C.

And I thought, "What the hell are they signaling for?!"

Now, I can see the logic, sort-of. If this was a 4-way intersection with a light or STOP signs, the driver at A would have been making a left turn, hence the left signal. But this is not a 4-way intersection! It's a roundabout, and since it keeps traffic moving at all times and since each act of exiting is a right turn, I maintain that there is no need to signal at all when negotiating the roundabout, no matter which way you're going. If you're in front of me in a roundabout, it does not make any difference at all where you're turning. There are only two possibilities in a roundabout: exit, or keep going around. Which one you're doing at each exit point does not matter to me at all. There is nothing for me to do with that information.

What say you, folks? Am I all wet (and guilty possibly of crappy driving)? Should I be signaling my way into and through the roundabout?

(Note that this is only about this kind of roundabout, not the more complex ones you find in larger cities where there are things to contend with like lane changes.)

My wife doesn't signal onto a roundabout, but she does signal off. I think (and she's not wrong) that she doesn't want to get rear-ended.
BTW, I HATE roundabouts when I'm walking/bicycle riding. I feel my life is always in JEOPARDY.
And they're quite prolific in the ALB area. There is a pair of them by the nanotech center, one pretty much after the other and I believe EVERYONE hates them because they are too close and disorienting.

First, I whole-heartedly agree on how brutal most drivers are with 4-way stops and right-of-way. I too wait and avoid eye-contact if the other driver has the right-of-way but is waving me on. NO! It's *your* turn to go, not mine!

As for signalling and roundabouts, I agree that signalling left before entering the circle is goofy. Not rage-inducing (I err on the side of over-signalling rather than under-signalling), but odd. BUT, I do use my right signal when I am in the circle and about to exit. Why? To let drivers who are waiting to enter the roundabout know that I am exiting and not continuing, so they can proceed. It gives them a couple seconds head start, which can make all the difference when there are a lot of cars. If I don't signal, by the time they are sure that I'm exiting the car behind me may be too close for them to enter.

That's my logic and I'm sticking to it.