"I pronounce you man and wife. Proceed with the execution!" 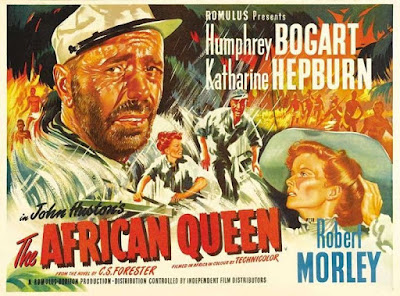 So a few weeks ago I was on my own at night, as The Wife was at work. (Well, The Daughter was there too, but she’s of the age when she’s doing her own thing.) I made something for dinner and decided to watch a bit of something as I ate. I saw that The African Queen was on Netflix, so I thought, “Hey, I love that movie! I’ll watch a few minutes of it while I eat, and then I’ll write.”

I ended up watching the entire movie.

It’s every bit as good as I remember, and if you haven’t seen it, well—you need to.

Yes, it’s an old adventure movie, but the emphasis is on the characters, so when the thrills come, they genuinely thrill, because you end up caring about these two people on this little boat on a river in Africa.

Our story: World War I has broken out, and Charlie Allnut, captain of the tramp steamer The African Queen, takes on Rosie Sayer as a passenger after her African mission is attacked and her brother killed in the wilds of Africa. Charlie’s intention is to take Rosie to safety, but she has other ideas after Charlie tells her about the German gunship Louisa that patrols the giant lake downriver: she wants to convert the African Queen herself into a floating torpedo and crash her into the Louisa, sinking her and winning an important victory for King and Country.

The African Queen is engrossing every time I watch it. The slowest part is the opening, the section of the film establishing who Rosie and Charlie are and why they’re in this remote part of sub-Saharan Africa. This is all over pretty quickly, though: it only takes about fifteen minutes before Rosie is aboard the African Queen, heading downstream with Mr. Allnut. I honestly can’t remember what the original plan is, but as soon as Charlie explains to Rosie why they can’t just boat to freedom, she comes up with her plan to strike for the good of the British Empire. Our plot is underway very quickly, and then it’s all about the obstacles they find along the way. These are predictable: massive rapids, a spot where the river bends around a German fortification, more rapids, engine trouble, worse engine trouble, and finally a morass of swampy channels as the river reaches its delta before entering the lake. There are underwater dives to repair the ship, there is heroic derring-do as Charlie has to keep the engine going while the Germans are shooting at them, and there are leeches.

The real obstacles to their success come in the relationship between Charlie and Rosie. Charlie is tough and cynical, but not in the way that Bogart’s Rick Blaine of Casablanca is tough and cynical. Charlie is the person who thinks that nothing is possible at first, until he goes and does it. Rosie is the one who thinks that nothing is impossible, and thus she cheerfully prods Charlie into all manner of ill-advised dangers. She is also offended by Charlie’s drinking, which she lives with until the night he drinks too much and says some awful things. The next morning he awakens, morbidly hung over, to find her pouring every one of his remaining bottles of gin into the river. Ouch.

It can’t be a surprise to anyone that Charlie and Rosie end up falling in love over the course of their shared trials and adventures. What I love most about it is that it’s not totally a typical screen romance. Charlie and Rosie come to form a partnership, and Charlie shifts gradually to seeing things with Rosie’s optimism and “can-do” spirit. Halfway through he pretty much stops insisting that everything is impossible before they do it, and they end up working together to get through the rapids and rebuild the boat and even, before what they think will be the African Queen’s final voyage, give her a thorough sprucing up, as befits a boat that will be doing the work of the Royal Navy.

The African Queen is a beautiful, funny, loving adventure film that is as engrossing as it gets. Bogart and Hepburn are awesome together, the action sequences are exciting and riveting even with their 1950s special effects, and it succeeds in being thrilling without giving us some mustache-twirling villain (at least, not until the very end, in the form of the German Captain of the Louisa, who gamely postpones executing Charlie and Rosie to marry them...a move which he likely regretted later). Most of all, The African Queen lets the boat be a character. That’s important!

Anyway, if you haven’t seen The African Queen, what are you waiting for?
scrawled here by Kelly Sedinger at 7:00 AM